Iowa rallies from down 20, holds on to beat Illinois in OT 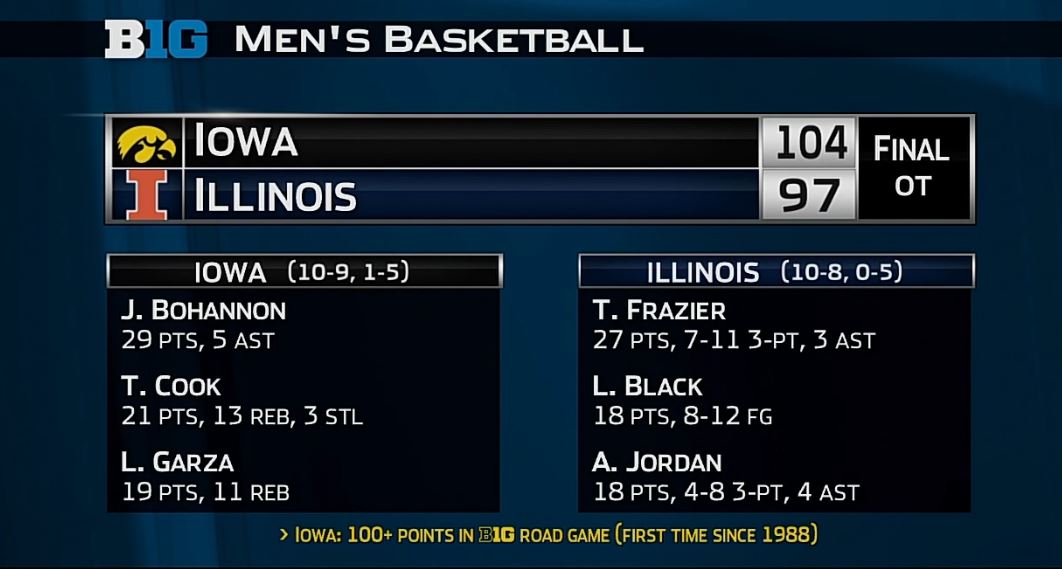 CHAMPAIGN, Ill. (AP) Jordan Bohannon scored 29 points as Iowa rallied from a 20-point deficit for a 104-97 overtime win over Illinois on Thursday night.

It was Iowa's second-largest comeback win in school history. The biggest comeback was 22 points, also against Illinois in 1987. Thursday's game marked the Hawkeyes' first Big Ten victory, and dropped the Illini to 0-5 in conference play.

Illinois, fueled by runs of 13-and 10-0 run early in the game leaped to a 54-41 halftime lead and seemed headed to an easy home win. Iowa outrebounded the Illini 45-26, including 20-9 in the second half, and outscored Illinois 33-11 from the free throw line.

Iowa big man Garza essentially took over for Iowa in the final four minutes of regulation, scoring seven points to give Iowa the lead, which it held until Frazier's buzzer-beater sent the game into overtime.

Iowa travels to Rutgers on Wednesday

Illinois plays at Nebraska on Monday.