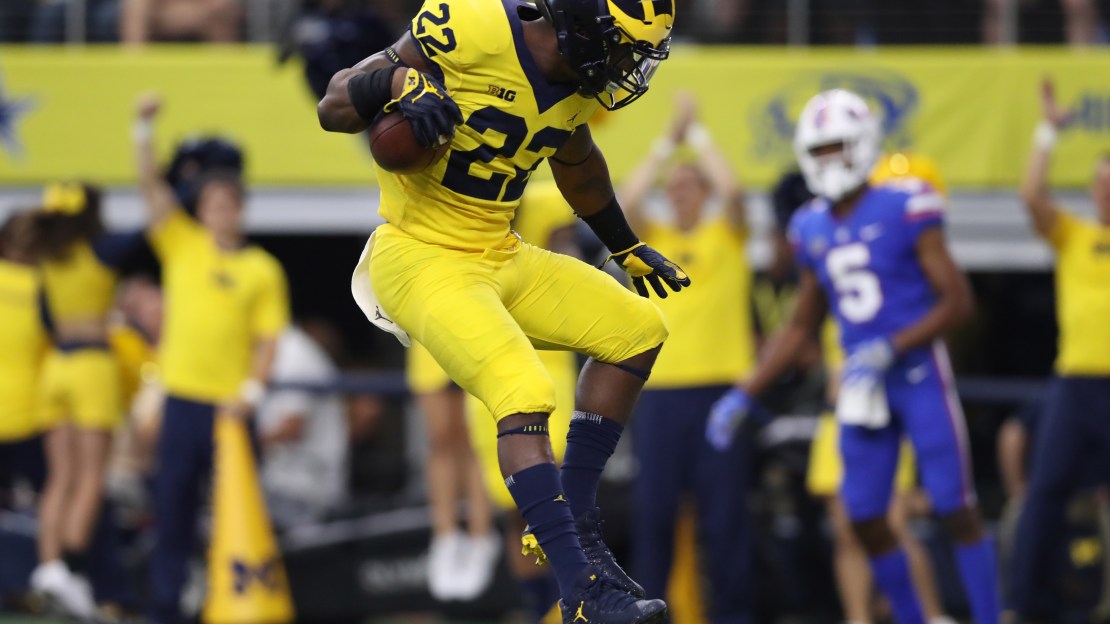 The college football season was punctuated with an exhilarating national championship game on Monday. Now, all eyes point toward next season. Questions loom for all programs.

1. Can Michigan find its offensive swagger? This will be Jim Harbaugh?s fourth edition in Ann Arbor. And we still are waiting to be wowed by his offensive acumen. The storyline has basically gone as follows: dominate bad teams; struggle vs. good ones. No doubt, quarterback play must improve. Perhaps Ole Miss transfer Shea Patterson, assuming he's granted immediate eligibility, is the elixir to what ails this offense. Or maybe sophomore Brandon Peters can take a big step.

2. Who will take snaps for Ohio State? All-time great J.T. Barrett has left the Horseshoe with a raft of records after starting for what seems like a decade. Now what? Sophomore Dwayne Haskins sure looked good in relief of an injured Barrett in a win at Michigan. But don?t count out junior Joe Burrow and redshirt freshman Tate Martell, whose styles seem to mesh more with Urban Meyer?s power-spread principles.

3. How much will Penn State miss Saquon Barkley, who turned pro? The guy was iconic and arguably the top running back in the nation last season when he led the Big Ten with 23 touchdowns and ran for 1,271 yards and added 54 receptions for 632 yards. Barkley also found time to run back two kickoffs for touchdowns. But the Nittany Lions have some nice options in the wings, led by junior Miles Sanders.

4. How much will Penn State miss OC Joe Moorhead? No staff suffered a bigger loss, as Moorhead rode off to take the head coaching job at Mississippi State. In two years in State College, Pa., Moorhead made this into one of the top attacks in the nation. James Franklin wasted no time in promoting Ricky Rahne to the job. And he did well pushing the buttons in a 35-28 Fiesta Bowl win vs. Washington in which PSU had 545 yards.

5. Will Scott Frost be an instant hit? The guy already is being treated like Elvis across the state. No doubt, Frost brings a glossy resume back home from UCF and is in store for a long honeymoon. Lucky guy. But at some point, results-BIG results-will be expected for a program that amazingly hasn?t won a conference title since 1999. Frost knows offense. But the Cornhuskers need to get better on the offensive and defensive lines, first and foremost. Until that happens, fancy pass patterns and 500-page playbooks won?t matter much. Last season, Nebraska finished 13th in the Big Ten in rushing (107.5 ypg) and 13th in rush defense (214.8 ypg). Nuff said. Oh, and NU was dead last in total defense (436.2 ypg). Where have the Black Shirts gone?

6. Speaking of Nebraska ? who will be the quarterback? Tanner Lee and his Big Ten-high 16 picks have left for the NFL a year early after what best can be described as a ?solid? season. Frost is hailed as a ?quarterback whisperer.? Well, he?s gonna have to whisper long and hard to find a triggerman capable of making Nebraska matter in 2018. Sophomore Patrick O?Brien will get a look. Incoming freshman Adrian Martinez already has the locals jacked up. Stay tuned.

7. Can Alex Hornibrook take the next step in his development? No doubt, the junior had his moments in 2017 in leading Wisconsin to a 12-0 regular season mark. He hit 62.3 percent of his passes for 2,644 yards with 25 TDs. Not bad. The problem? Those ugly 15 interceptions. Only Nebraska?s Tanner Lee (16) tossed more. Hornibrook needs to take better care of the ball for what could be a dynamite Badger offense that returns all five linemen, RB Jonathan Taylor and WRs Danny Davis and A.J. Taylor.

8. Will the Minnesota offense wake up? The Gophers ranked 12th in the Big Ten in scoring last season (22.1 ppg) and 12th in total offense (308.5 ypg). The passing game was abysmal, ranking second-to-last in the Big Ten (126.1 ypg) with a scant nine TD passes. P.J. Fleck needs to find a quarterback. And he may have signed his guy in December in JC Vic Viramontes, who has a big arm, big hair and lots of tattoos. He is enrolled and will have three years of eligibility as he battles redshirt freshman Tanner Morgan and sophomore Seth Green. Viramontes committed to Michigan out of high school but signed with Cal before landing at a JC.

9. Can Iowa?s offense get a spark? QB Nate Stanley flashed potential in his first season as the starter in 2017. But he needs help. This program seems to perpetually be searching for difference-makers on the edge. And the line wasn?t up to its usual standards last year thanks to injury. Bad news: The top two blockers are gone in Sean Welsh and James Daniels. And add this to your ?worry? list: RB Akrum Wadley has skedaddled. Iowa was 12th in the Big Ten in rushing (139.2 ypg). So un-Iowa-like.

10. Can Michigan State stay hungry? Look, there are no glaring concerns in East Lansing for a squad coming off a 10-win season. Most every key cog is back for Mark Dantonio, including QB Brian Lewerke, RB LJ Scott, WR Felton Davis III, DE Kenny Willekes, LB Joe Bachie and CB Josiah Scott, among others. But now, MSU will be a hunted team. No more sneaking up on foes, as the Spartans may have done in 2017 when they were coming off a 3-9 season. One area to watch: The defense, as coordinator Harlon Barnett left for the same post at Florida State. He was a valued member of the staff.

11. Can the defense be good again at Purdue? Coordinator Nick Holt performed a miracle of sorts by making this the most improved defense in the nation last season. The Boilermakers allowed just 20.5 points and 375.5 yards per game a season after yielding 38.3 points and 445.8 yards. That?s a difference of 18 points and 70 yards. Amazing. It was that defense which proved most valuable in the program going 7-6 in Jeff Brohm?s debut. But the unit has been gutted with players like LBs Ja?Whaun Bentley and T.J. McCollom, E Danny Ezechukwu, CB Da?Wan Hunte and T Gelen Robinson gone. No doubt, there will be growing pains.

12. Will Clayton Thorson be OK? The star Northwestern senior quarterback suffered an ACL injury in the bowl win vs. Kentucky. Early indications are that he may not be ready for the start of the season. The options behind Thorson are unknowns: TJ Green, Andrew Marty and Aidan Smith. Any of those names ring a bell? Didn?t think so. The trio has combined to toss one pass. FYI: NU opens the season Aug. 30 at Purdue.

13. Will the Big Ten have a playoff team? You?d think the league would get back into the four-team event in 2018 after getting shutout this past season. Ohio State always looks like a good best bet, as long as the quarterback spot settles. The biggest question Ohio State faces is a defense that must replace some key cogs in LBs Chris Worley and Jerome Baker, S Damon Webb, CB Denzel Ward, E Sam Hubbard, T Tracy Sprinkle and E Tyquan Lewis. Ward, Hubbard and Baker left early. There is always talent in Columbus. It just needs to develop on defense quickly.

15. Will Rutgers develop an offensive pulse? This program will be on its ninth offensive coordinator in nine years after Jerry Kill stepped down. It?s almost difficult to comprehend turnover of that magnitude. Yet, that?s the predicament in Piscataway for Chris Ash in Year Three. Whoever is pushing buttons must find a quarterback to put some bite in an often listless attack. The QB spot has been a weakness too long. Touted true freshman Artur Sitkowski-who was a Miami (Fla.) commit–could get a long look, along with sophomore Johnathan Lewis.

16. Can Maryland find a defense? The unit was abysmal in 2017, as the Terrapins finished last in the Big Ten in scoring defense (37.1 ppg) and 13th in total defense (419.4 ypg). Until this side of the ball-which is the area of expertise for head coach DJ Durkin-improves, Maryland will struggle to make much headway in the rugged Big Ten East.

17. Will Indiana find consistency on offense? The Hoosiers had ups and down on offense last season, beginning the year with Richard Lagow at quarterback, benching him for Peyton Ramsey. Then, Ramsey got hurt and Lagow finished the year. But an inability to run well was the real issue. The Hoosiers finished 12th in the Big Ten in rushing (130.1 ypg). This from a program whose identity had been a strong ground game under Kevin Wilson, who had backs like Jordan Howard, Tevin Coleman and Devine Redding. IU needs to find its running groove again to take pressure off a defense that lost lots of good players.

18. Can the Michigan offensive line get tough? It's no secret that this unit hasn?t gotten a good push vs. quality foes. The departures of tackle Mason Cole and center Patrick Kugler won?t help the cause of the 2018 front. The Michigan line needs to protect the new QB and open holes for RB Karan Higdon and Co. For too long, the big boys in Ann Arbor have underachieved. Where?s the Jon Jansen? Jake Long? Taylor Lewan?