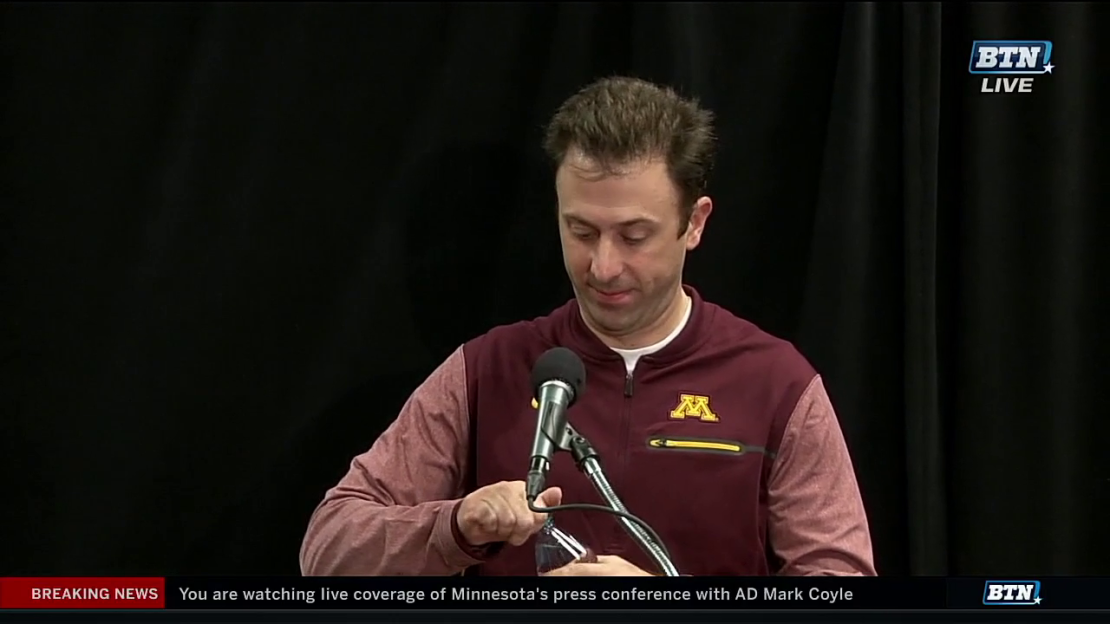 Minnesota has a big basketball game tomorrow against Indiana as the Gophers fight to stay in the hunt for a Big Ten title and NCAA bid.

But those concerns pale when compared to Friday's announcement that star center Reggie Lynch has been suspended over a violation of the school?s sexual misconduct policy. While Lynch remains a student and a member of the basketball program, he cannot compete in games.

"It's a decision I made today," Minnesota A.D. Mark Coyle said. "I involved coach (Richard) Pitino and the student-athlete involved."

Earlier, The St. Paul Pioneer Press and Minneapolis Star Tribune reported that Minnesota's Office for Equal Opportunity and Affirmative Action is recommending Lynch be suspended from the school until 2020 for violating the school's sexual harassment policy.

The Star-Tribune also reported that Lynch will appeal the decision.

Coyle spoke to the media at a press conference ahead of the usual press session with men's basketball coach Richard Pitino. Neither one really said much of substance as both pointed repeatedly to governmental privacy concerns. Pitino was asked if he should have allowed Lynch to come to Minnesota after he transferred from Illinois State and sat out the 2015-16 season.

?We never saw any red flags. We do as much background as we can with everybody we bring in,? Pitino said.

Pitino added,  ?When things like this happen, you go to your boss. You go to your policies in place. And I feel we did that.?

The alleged assault took place April 2016, and this is the second woman to accuse Lynch of assault. In May 2016, the month following the aforementioned alleged assault, Lynch was arrested for a separate incident. The incidents involve different accusers.

All the while, Lynch was allowed to play for the Gophers. The 6-10 Lynch is a star for the Gophers and a possible NBA talent. No doubt, he is a big part of a Minnesota team that is a Big Ten contender that looks capable of making the NCAA tourney for the second year in a row.

Making the Big Dance is the least of Minnesota's concerns, given the tense national atmosphere surrounding sexual assault amid a raft of allegations that has exposed many and ruined the careers of high-profile people in myriad industries in recent months. The curtain has been pulled back farther than ever on this subject, and it has been revealing and sobering to witness. Just look at how the #MeToo movement has dominated many social conversations.

Lynch averages 10.1 points and 8.0 rebounds (seventh in the Big Ten) this season for a Gophers team that is 13-3 overall and 2-1 in the Big Ten. His 4.1 blocks per game lead the conference.

Lynch made a big impact last season after sitting out following his transfer from Illinois State. A native of Edina, Minn., Lynch was named the Big Ten Defensive Player of the Year, leading the conference in blocked shots with a school single-season record 114 for a 24-10 team that went 11-7 in the Big Ten to finish fourth before a first-round loss in the NCAA tourney.

Will Lynch play again this season? Reporters asked Pitino that and no one could say for sure today. But no matter the spin or ultimate outcome of the Lynch case, some are always going to wonder about and question many things. Among them: Did the school act quickly enough in the case? Should Lynch have been playing at all? Who knew what when?

Unfortunately, this story brings back memories of 2016. The school saw 10 football players accused of sexual misconduct in an alleged assault on a female student in September 2016.

Ultimately, four of the 10 were cleared, four were expelled and two others were suspended. In the midst of the investigation, the football team threatened to boycott its Holiday Bowl trip in protest of the suspensions. The players ultimately relented, but not before more ugly national headlines.

Coyle was hired in May 2016 from Syracuse by Minnesota to right a listing athletic department that had seen his predecessor, Norwood Teague, resign amid revelations that he sexually harassed two female university employees. Teague acknowledged his actions. This is the type of occurrence Coyle was supposed to help the athletic department avoid as it pressed into a new era with finishing touches coming to a sparkling $166 athletic village.

Reporters pressed Coyle on this with one reporter asking, "Should you keep your job?"

?We have worked incredibly hard to provide a first-class experience for any student-athlete that comes to our program,? Coyle responded Friday. ?Since I got here in June 2016, we've talked about being defined by our actions, by having great humility, and by representing this institution in a first-class manner. I feel like each time we are faced with a situation involving any student-athlete and any staff member, we want to handle appropriately and swiftly. I feel like we?ve been very consistent in that process.?

Now, Minnesota finds itself in the national headlines again for all the wrong reasons.