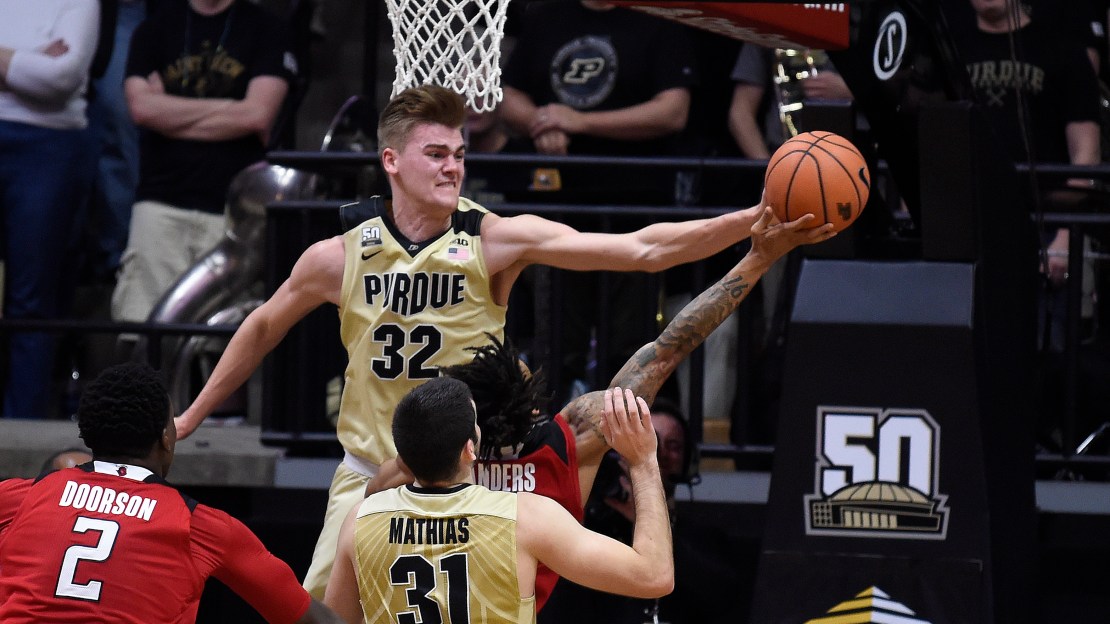 On Wednesday night, he went with them out of necessity. If Isaac Haas and Matt Haarms continue playing this well in tandem, they could become a big staple for the defending Big Ten champions.

Haas scored 14 points and Harams grabbed six rebounds and blocked three shots, leading the 13th-ranked Boilermakers to an 82-51 rout over Rutgers for their 10th straight win.

"I like it because it provides a lot of length on defense," said Haas, the 7-foot-2 senior. "I think it allows us to get more spread out on defense. On offense, you have guys that are long rebounders that can go high-low. I just can't wait to see how that develops the rest of the season."

So far, it's worked beautifully.

The Boilermakers (14-2, 3-0) have won 17 in a row at Mackey Arena and are the only Big Ten team with three conference wins. No. 1 Michigan State and Ohio State can join them Thursday.

And Haas and the 7-3 Haarms played a huge role in turning the tables on Rutgers, which was ranked No. 3 nationally in total rebounds and No. 4 in scoring defense.

But with Haas and Haarms dominating the middle, Purdue outscored Rutgers 28-14 in the paint and had a 45-27 rebound advantage, giving the Scarlet Knights no chance.

"I think all of their lineups cause problems," Rutgers coach Steve Pikiell said. "The two big guys do cause problems though each one is different. Haas is a monster down low and the other one is a good shot blocker."

And the primary reason Painter went with the pairing was because starting forward Vincent Edwards was in foul trouble most of the night.

It wasn't just the big men who got the job done for Purdue, which made 7 of 12 3-pointers in the first half and finished 10 of 23.

But the combination was simply too much for Rutgers' young team.

Rutgers got as close as 51-37 when Baker made Rutgers' first 3 of the night with 13:27 left to play. Then Purdue answered with six straight and stretched the lead to as much as 33.

"For me, it's more about learning how to play the 4 a little more," Haarms said. "When Coach tells me to go get Vince, I get a big smile on my face."

Rutgers: The Scarlet Knights are improving but don't possess the size, depth or scorers to seriously challenge a team like Purdue. And when things went awry Wednesday, Rutgers even lost its poise. With nine freshmen and sophomores on the roster, brighter days are ahead.

Purdue: Showed everyone why it could repeat this season. The Boilermakers can win games by playing big or small, they can outscore opponents, shut them down defensively and can play through foul trouble.

Rutgers: Freshman Mamadou Doucoure scored eight points before fouling out with 12:55 to go and then picked up a technical on his way to the bench. … The Scarlet Knights allowed their second-highest point total this season (89 at Minnesota). … The last time the Scarlet Knights beat a Top 25 team on the road was Jan. 26, 2008 at Pittsburgh.

Purdue: Carsen Edwards had 12 points, five rebounds and four assists while Ryan Cline had 12 points and Vincent Edwards added 10. … Purdue is 3-0 to start conference play for the first time since 2010-11 and is 13-0 on American soil this season. It went 1-2 in the Bahamas. … The Boilermakers have scored 80 points in six straight games for the first time since Dec. 6-27, 1997.

Purdue honored former star Steve Scheffler by handing out bobble heads before the game and having him speak to the crowd at halftime.

The 1990 Big Ten player of the year, captivated the audience with stories about his playing days and former coach Gene Keady, who also attended the game. But he didn't mince words.

"I should not be a bobble head, I should be a knucklehead," Scheffler joked. "If they can make me a bobble head for throwing leather through metal, imagine what they can do with you."