Best of 2018 Outback Bowl: South Carolina rallies to down Michigan 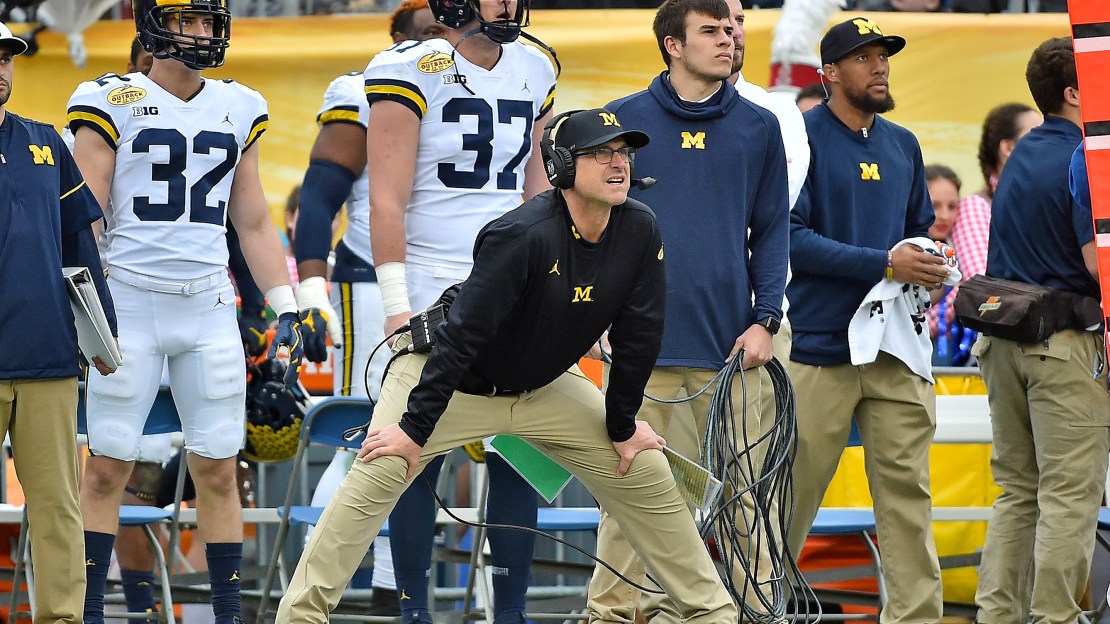 This isn't where even the most die-hard Michigan fan envisioned the program being in Year Three under Jim Harbaugh, who is paid handsomely at $7 million per year. A rebuilt defense played well most of the year, but the offense struggled at times. Inconsistency and injuries at quarterback were obstacles, as the passing game lacked steadiness and big-play ability. The offensive line remains a concern, too, as it continued to have issues opening room in the ground game vs. quality foes.

What's it all mean? The 2018 season is a big one for Harbaugh, who has yet to finish higher than third in the Big Ten East and is 1-5 vs. Ohio State and Michigan State. Wonder if Harbaugh will plan another exotic spring break trip?

BEST OF THE OUTBACK BOWL

Best play: Not sure Michigan had much to brag about in this department. Let's go with a 27-yard catch by Kekoa Crawford, the longest play from scrimmage on the day for the Wolverines. Remember: This offense had to settle for four field goals. It was mostly a pop-gun attack on a dreary day in Tampa.

Best player: South Carolina QB Jake Bentley showed why he may be a future pro, hitting 19-of-32 passes for 239 yards with two touchdowns and a pick. Michigan's Brandon Peters completed 20-of-44 passes for 186 yards with no TDs and two picks.

Best moment: On the night before the Outback Bowl, Wolverine DE Chase Winovich and DT Maurice Hurst dyed their hair orange after thousands of dollars were raised for the ChadTough Foundation. Chad is Chad Carr, the grandson of former Michigan coach Lloyd Carr who died of a rare cancer at age 5. DC Don Brown even got in on the act by dying his mustache orange.

Best stat: 61, yards rushing allowed by Michigan on 26 carries. Impressive. But the Wolverines had no luck running the ball, either, notching only 74 yards on 33 totes.

OFFENSE: F. Brandon Peters got the start. And he looked like a lost redshirt freshman. He didn't move well in the pocket and he often was off the mark with his passes. It was ugly at times, as Michigan had four turnovers with two in the red zone. If this was an audition for Peters, he failed, doing little to get a leg up on the starting job for 2018. Touted Ole Miss transfer Shea Patterson is poised to join the race in the spring. No way this version of Peters has a shot to start next fall. The pick Peters threw in the end zone with Michigan trailing 23-19 late in the fourth quarter was a killer. The running game never got on track, either, offering Peters little help. Bottom line: This offense lacked direction and wasn't sharp.

DEFENSE: B-. Michigan sat on South Carolina in the first half. But then, the Gamecocks came alive behind the passing of QB Jake Bentley. The South Carolina offense got a lift from a second-half Michigan fumble, responding with a TD to cut the Wolverines' lead from 19-9 to 19-16. Then, USC forced a punt and scored on a long TD pass to take a 23-19 lead. While Michigan got gashed in the pass game, it was tough vs. the run and generated three turnovers. So, there were some positives.

SPECIAL TEAMS: B-. A muffed punt late in the fourth quarter by Donovan People-Jones was killer, as Michigan needed the ball back as it trailed 23-19. The good news: K Quinn Nordin nailed all four of his field goals from 35, 26, 45 and 48 yards.