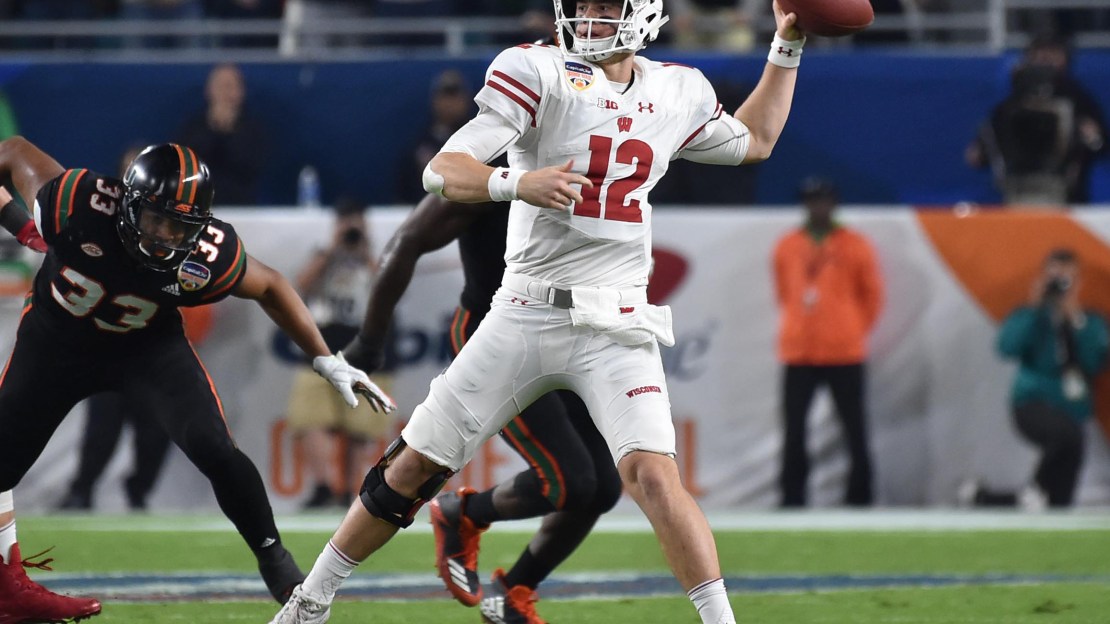 The Badgers had their eyes on a playoff spot after going 12-0 in the regular season, but those hopes were dashed when Wisconsin lost to Ohio State in the Big Ten title game. So, the Badgers had to settle for a trip to the Orange Bowl to take on Miami (Fla.) in what amounted to a home game for the Hurricanes.

After a slow start, the Badgers took control in the second quarter, forged a 24-14 halftime lead and never looked back behind the play of a strong defense and balanced offense to win the Orange Bowl, 34-24, a season after winning the Cotton Bowl. Wisconsin finishes 13-1, the first time in program annals the Badgers have won 13 games.

BEST OF THE ORANGE BOWL

Best play: Wisconsin LB Andrew Van Ginkel made an impressive interception in the second quarter, keeping his feet after avoiding a cut-block attempt and picking off a pass. The interception provided a spark to Wisconsin, which had been a bit listless up to that point. Three plays after Van Ginkel's pick, the Badgers tallied a TD to cut Miami's lead to 14-10. Wisconsin had life.

Best player: The Badgers rode RB Jonathan Taylor all night. Why not? The kid is a stud, but he has lost a FBS-high six fumbles including one tonight. Still, Taylor is special. And he's just a true freshman. On this night, he carried 26 times for 130 yards. He finished the year with 1,977 yards. That's more than any freshman in FBS annals. Also have to tip our hat to QB Alex Hornibrook, who completed 23-of-34 passes for 258 yards with four TDs and no picks. Turnovers had been a bugaboo all year for the sophomore. But he played a clean game tonight.

Congratulations to @23J_Taylor on a historic freshman season. ?

Best moment: It always is fun to watch Miami celebrate a turnover. Because that means the Hurricanes will break out their Turnover Chain, which became one of the hottest items in the 2017 college football season. Whichever Miami player makes the turnover gets to wear the big, gaudy and gold chain that features an oversized Miami logo. A problem for the Hurricanes tonight: They were able to break out the chain just one time.

Wisconsin went and did it on 'em… pic.twitter.com/BEg3DL7Zg1

OFFENSE: A-. The attack had its moments-good and bad. Jonathan Taylor did his stuff, finishing with 1,977 yards rushing to pass Adrian Peterson for the most yards rushing in a season for a freshman. But a big key for UW tonight was the play of wideouts Danny Davis and A.J. Taylor. This tandem posed big issues for Miami. Davis, a true freshman, made five catches for 56 yards with three TDs. Taylor, a sophomore, notched eight receptions for 105 yards with a TD. Just think, UW didn't even have its top wideout-Quintez Cephus-who was out with injury.

DEFENSE: A-. The Badgers brought some lofty credentials to South Florida. And, for the most part, the Wisconsin defense lived up to its billing. Miami got some yards on the ground (174), but the Badgers did a good job vs. the pass. Canes QB Malik Rosier hit just 11-of-26 passes for 203 yards with a TD and three interceptions as Miami had 377 yards of offense and was 2-of-10 on third downs.

SPECIAL TEAMS: B-. There were no big plays in the return game for either team. But Wisconsin got a lift from K Rafael Gaglione, who was money by hitting field goals from 35 and 47 yards. Miami's kicker hit just one-of-three field-goal attempts.