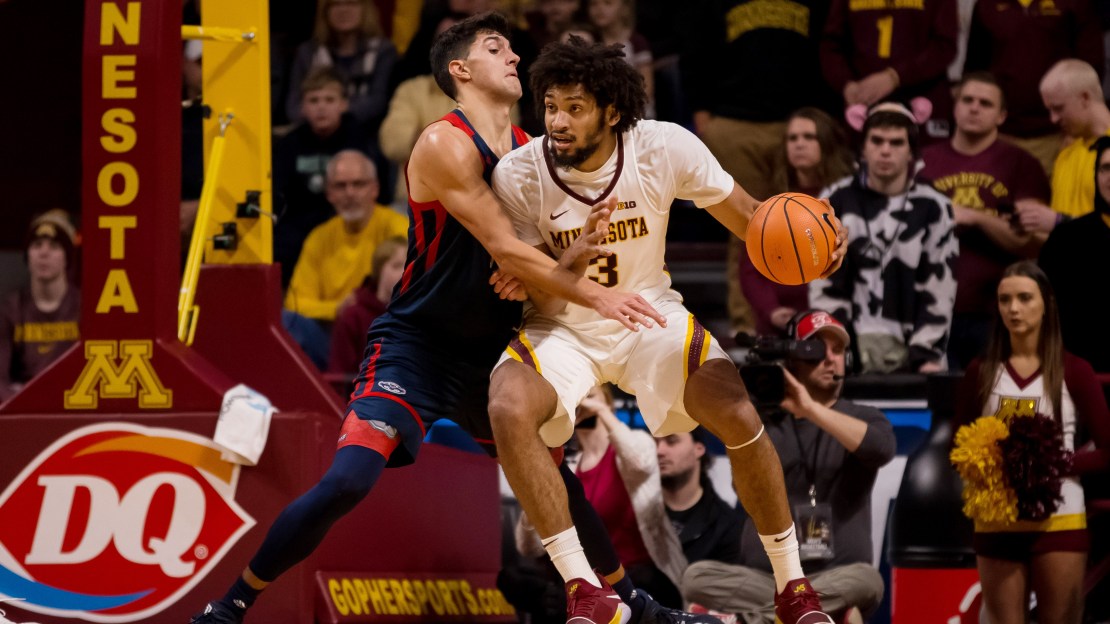 Dupree McBrayer returned from a two-game absence to a lower left leg injury with a team-leading 15 points on 3-for-6 shooting from 3-point range, a big boost for the Gophers backcourt with senior point guard Nate Mason sitting out to protect a sprained left ankle.

Freshman Isaiah Washington started in Mason's place and grabbed a game-high 13 rebounds to help soften the blow of a 4-for-17 shooting performance from the field.

Corey Johnson led the Crimson with 12 points, going 4 for 10 from 3-point range. The rest of his teammates were 3 for 22 behind the arc.

Amir Coffey, who had 12 points and five assists for the Gophers (12-3), started the second half with a corner 3-pointer to push their lead back to double digits. The Crimson (5-8) didn't fade despite their perimeter-shooting persistence, finally attempting their first free throw with 12:11 remaining in the game.

Chris Lewis, who added 10 points, converted a reverse layup before a 3-pointer by Johnson brought the Crimson within 45-42 and brought the bench players jumping to their feet to cheer. McBrayer coolly sank a 3-pointer at the 8-minute mark on the other end, though, and the Gophers muscled their way to an important victory in their final nonconference game of the season.

Williams Arena at tipoff was minus-7 degrees, and the jump-shooting by both teams was just about as cold at the beginning of the game. The Gophers bricked nine of their first 11 attempts from the floor, until a steal by McBrayer sent him on a one-man fast break for a one-handed dunk to cut the Crimson's lead to 9-7. The Gophers finished a 16-3 run with a 3-pointer by Davonte Fitzgerald for a 20-12 advantage that held until the 6 1/2-minute mark, but with 29 points at the break they registered their second-lowest halftime score of the season.

The Crimson, though, missed 12 of their 14 attempts from 3-point range in the first half.

Harvard: After winning 20 or more games in six of head coach Tommy Amaker's first nine seasons, including five shared or outright Ivy League titles and two NCAA Tournament victories, the Crimson slipped back toward the pack the last two years, finishing fourth and second in conference play. They were picked as the preseason favorite to win the league in 2017-18, but aside from a competitive 79-70 defeat at then-seventh-ranked Kentucky on Dec. 2 they've got plenty of blemishes on their record already. This kind of game ideally will further toughen them for conference play.

Minnesota: The Gophers did exactly what they needed to do in the program's first game against Harvard, avoiding further injuries and recording their fourth consecutive victory. Most promising over the last few weeks has been an uptick in production from a thin bench, with Hurt and Fitzgerald providing quality playing time on Saturday.

Harvard: The Crimson return home to host Vermont on Tuesday, before beginning Ivy League play with a game against Dartmouth next Saturday.

Minnesota: The Gophers resume Big Ten action next week with consecutive home games against Illinois on Wednesday and Indiana on Saturday.