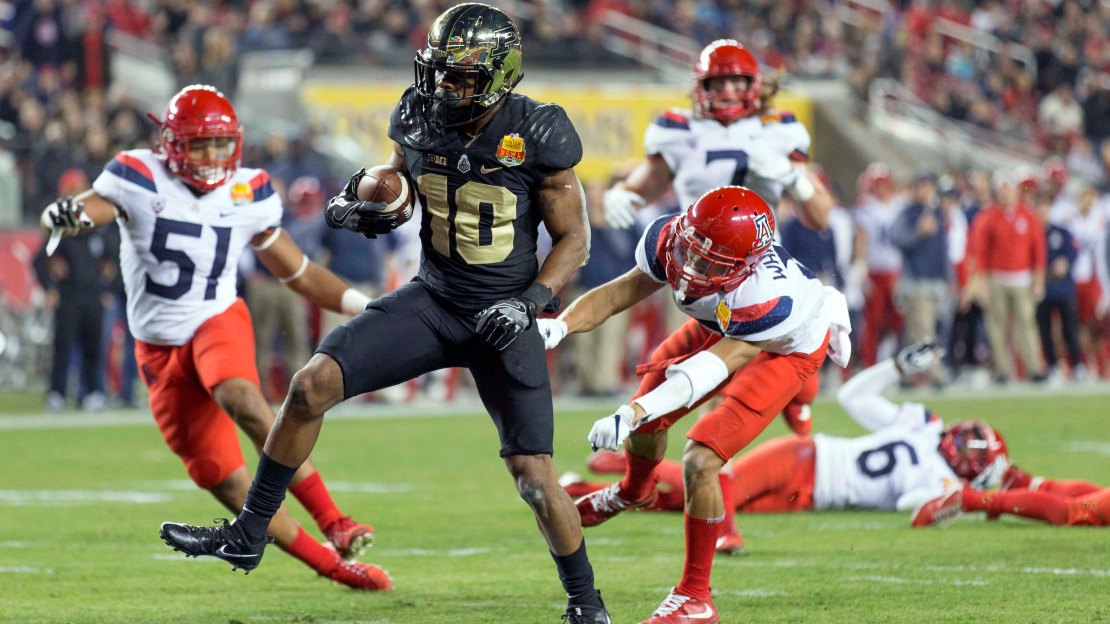 Few could have envisioned Purdue being in a bowl at this time last year. But first-year head coach Jeff Brohm delivered the Boilermakers to their first postseason berth since 2012. Even better, Purdue capped its remarkable turnaround season with a wild 38-35 win vs. Arizona, blowing a 31-14 lead before rallying for the game-winning TD with less than two minutes to go.

It's gonna be fun to see where Brohm has this program in a few years.

Best play: So many to choose from. Late in the first half after Boiler S Navon Mosley stripped Arizona QB Khalil Tate and recovered it, Purdue took over with 47 seconds left leading 28-14. The Boilermakers lined up as if to take a knee and kill the clock to end the first half. But instead, Purdue RB D.J. Knox took a sneaky hand-off and ran 30 yards. That led to a 26-yard field goal and 31-14 halftime lead.

Best player: Purdue QB Elijah Sindelar. The Boilermakers rode the sophomore's big right arm to a 3-1 finish and bowl bid. Sindelar wasn't done, however, hitting 33-of-55 passes for 396 yards and four TDs on this night. Special shout out to Purdue senior WRs Anthony Mahoungou and Gregory Phillips. Phillips made 14 catches for 149 yards and two TDs. Mahoungou had six grabs for 118 and two touchdowns. Each made a spectacular touchdown catch. Mahoungou's went for the game-winning TD, as he made a sensational grab over a defender.

Best stat: 30, as in catches for Purdue WR Gregory Phillips entering the game. He made 14 grabs tonight for 149 yards and two TDs.

OFFENSE: B+. The offense looked as good as it has all season in the first half, when Purdue built a 31-14 lead. There were balance and big plays. For how good the offense was in the first half, however, it was horrid in the second half. The Boilermakers took the opening drive of the second half and promptly missed a field goal. That was a portend of things to come, as Purdue did absolutely nothing for most of the final 30 minutes vs. an Arizona defense that entered the game ranked No. 10 in the Pac-12 in scoring and No. 10 in total defense. But when the chips were down and the Boilermakers absolutely positively had to have a TD ? Elijah Sindelar delivered a game-winning 38-yard TD pass to Anthony Mahoungou, who made a spectacular catch for a Purdue offense that tallied 555 yards.

DEFENSE: B-. Arizona entered the night ranked No. 3 in the nation in rushing (324.4 ypg). And for the most part, the Boilermakers bottled up the potent Wildcat attack. Arizona QB Khalil Tate came in with 1,353 yards rushing, averaging 10.2 yards per carry. On this night, he had 58 yards on 20 carries as the Wildcats had only 128 yards on 43 carries. But the problem? The Purdue pass defense was rotten. Time and again, Tate found open receivers down field en route to hitting 17-of-26 passes for 302 yards with five TDs. The last one looked like a game-winning dagger from 24 yards with 3:21 left that gave the Cats a 35-31 lead. The Boilermaker defensive backs often looked lost in coverage as there was busted coverage after busted coverage. But in the end, the beleagured secondary made a game-sealing interception.

SPECIAL TEAMS: C-. A missed 45-yard field goal to open the second half set a bad tone, as the Purdue offense struggled throughout the final 30 minutes. There also was a missed PAT, but Purdue got a do-over after an Arizona penalty and nailed it. Per usual, the Boilermakers got nada from the return game. Also per usual, punter Joe Schopper was excellent.