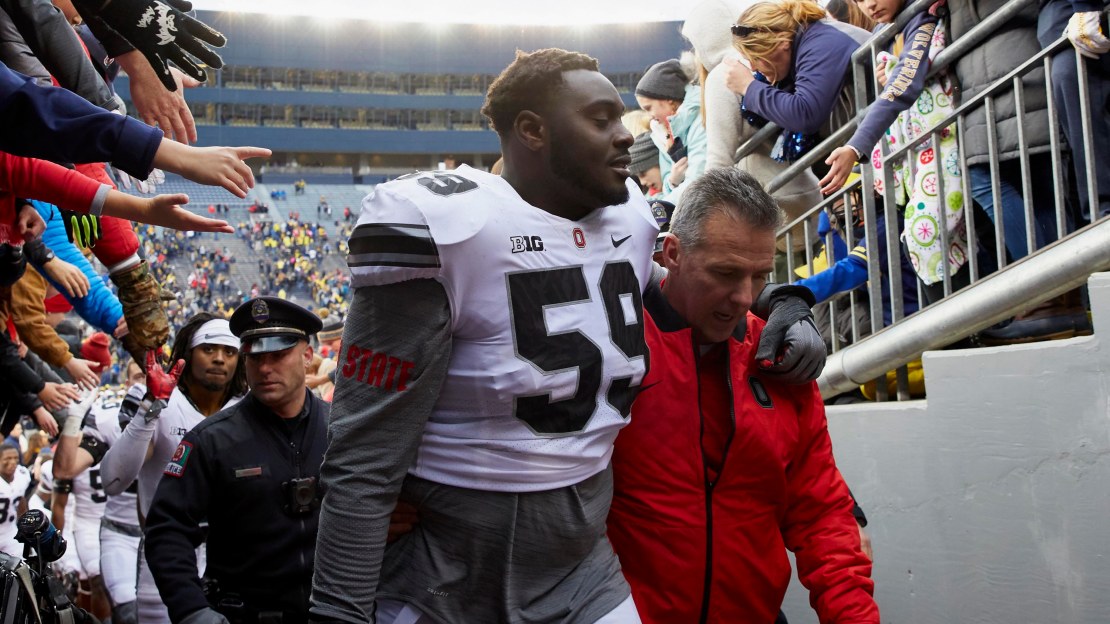 (AP) No. 5 Ohio State and No. 8 USC stated convincing cases for inclusion in the College Football Playoff at the conclusion of their conference championship-winning seasons.

The Big Ten champion Buckeyes and Pac-12-winning Trojans may not be in the Playoff, but their meeting Friday in the Cotton Bowl Classic at AT&T Stadium in Arlington, Texas, carries its own special aura.

"These matchups are just as exciting, and our kids are looking forward to it," USC coach Clay Helton said at his Dec. 23 press conference.

USC (11-2) and Ohio State (11-2) share extensive postseason history. They met in seven Rose Bowl Games from 1955-85, at which time the Trojans scored three of the wins in their current, seven-game streak against the Buckeyes.

The two programs last faced in 2009, three years prior to Urban Meyer taking over as head coach at Ohio State and before two-time national championship-winning coach Pete Carroll left for the NFL's Seattle Seahawks, setting in motion a chain of events that resulted in the mid-season firings of two coaches — Lane Kiffin in 2013 and Steve Sarkisian in 2015 — that led to Helton taking over.

USC has found stability in Helton's first two, full seasons. The Trojans have back-to-back double-digit-win seasons for the first time since 2007 and 2008, won their first Pac-12 Conference championship since 2008 this season, and in the Cotton Bowl Classic, seek a repeat of last season's thrilling finish. USC capped the 2016 campaign with a Rose Bowl Game win over Big Ten Conference champion Penn State.

The tumult at USC prior to Helton's tenure stands in stark contrast to Meyer's stint at Ohio State. He came to Columbus in 2012 with two national championships already to his name from his time at Florida, and a perfect season at Utah. Meyer enjoyed immediate success with the Buckeyes, going undefeated in his first season and winning the first College Football Playoff in his third.

The Cotton Bowl Classic marks Ohio State's first game at AT&T Stadium since winning that championship against Oregon in January 2015.

"I remember coming here in (the) 2014 (season) in the national championship run," defensive tackle Tracy Sprinkle said. "I wasn't fortunate enough to play back then, but I just remember walking in there and seeing that huge screen and just taking it all in. Now that we're both starters coming up — coming back this year to be able to play in it, it's going to be huge."

Ohio State may not be playing for a national championship, but an emphatic Cotton Bowl Classic win puts a fitting punctuation mark on the Buckeyes' season.

"It starts with the running game," linebacker Cameron Smith said of slowing the Buckeyes. "That's kind of our key every single time we walk out on the field, is we've got to limit that running game and make them one-dimensional."

Doing so is a tall task. Though USC features a talented front seven, including standouts Smith and Uchenna Nwosu at linebacker with breakout performers Rasheem Green and Christian Rector on the line, opponents have not had much success containing an Ohio State rushing attack averaging 249.4 yards per game.

Likewise, containment of the run game plays a central role in the Ohio State game plan.

"Their running back is ridiculous," Meyer said of USC's Ronald Jones II. "I finally had a chance to really watch him (on game film)."

Jones is cornerstone for an offense averaging 34.5 points per game, with an emphasis on run-pass balance. Quarterback Sam Darnold came alive in the back-half of the season with 14 touchdown passes against just three interceptions in USC's last seven games.

"Very good receivers. And the quarterback is obviously going to be a top two or three draft pick in the NFL," Meyer said. "So that's the biggest issue we're dealing with."

The Cotton Bowl Classic may not be the Playoff, but the players involved and the stakes surrounding it give this matchup its own significant feel.