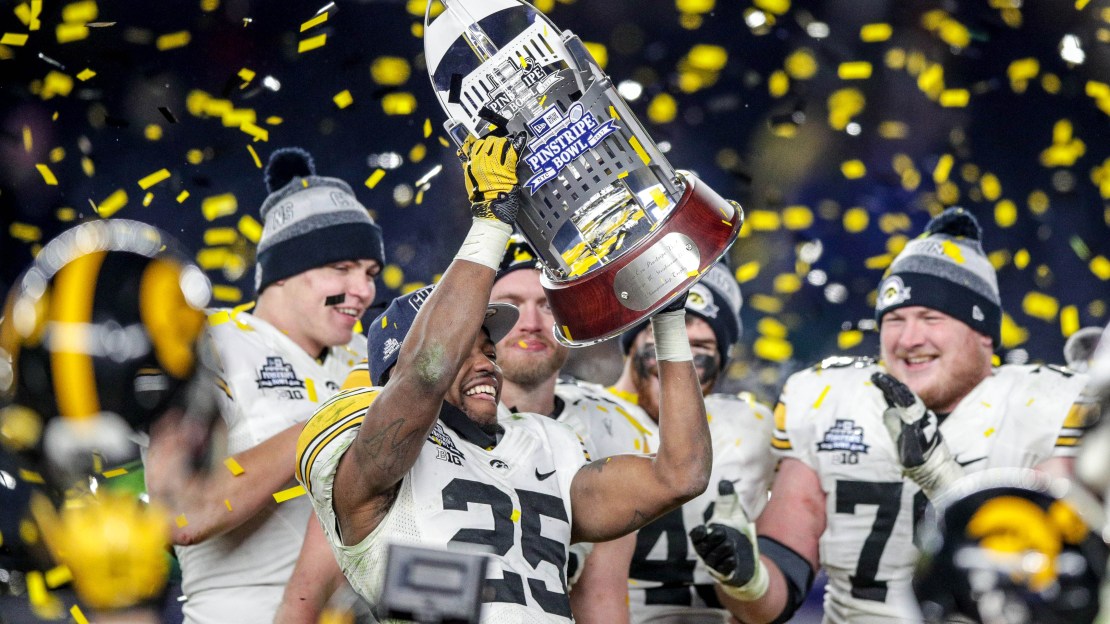 Iowa ended a Big Ten-long five-bowl losing streak, knocking off Boston College, 27-20, for its first postseason victory since knocking off Missouri in the 2010 insight Bowl. The win allowed Kirk Ferentz to tie Hayden Fry for the most wins in Hawkeye history with 143.

This game was a tale of two halves, as Boston College dominated in the first half in building a 17-10 lead. But the Hawkeyes came to life in the second half in a see-saw battle on a cold night in Yankee Stadium in the Bronx. This season didn't go as planned for Iowa, but it still reached a bowl for the fifth straight season and for the ninth time in the last 10 seasons. And it capped it with a win to finish with two wins in a row to go 8-5.

BEST OF THE PINSTRIPE BOWL

Best play: With the score tied, 20-20, late in the fourth quarter, Boston College began a drive on its 48. The Eagles looked primed to make a move and take the lead. But on third-and-eight, Hawkeye defensive end Anthony Nelson made a strip-sack of BC QB Darius Wade. Iowa recovered. Three plays later, Iowa scored the go-ahead TD on a one-yard plunge by Drake Kulick. That proved to be the winning score.

Best player: Iowa RB Akrum Wadley. Hailing from nearby Newark, N.J., Wadley carried Iowa to victory. The senior ran 22 times for 88 yards and a TD. He also caught two passes for 24 yards, while also running back four kickoffs for 146 yards. Add it up, and Wadley had 258 all-purpose yards. BC got great efforts from true freshman RB AJ Dillon, who has 157 yards rushing with a TD on 32 carries, and from TE Tommy Sweeney, who made seven grabs from 137 yards and a TD. But Wadley was the man tonight.

Best moment: Even though this game took place miles from Kinnick Stadium, Iowa fans in attendance at Yankee Stadium still did hospital wave that became the coolest new tradition in college football in 2017.

Cool to see the @UIchildrens Wave one last time in 2017, this time from Yankee Stadium: pic.twitter.com/q7aRidnq22

Best stat: 0, as in turnovers for Iowa. BC had three turnovers, which the Hawkeyes turned into 10 points.

Offense: C. The unit struggled mightily in the first half, notching less than 60 yards. But the Hawkeye offense got on track in the second half. Iowa finished with just 200 yards, but it was enough on this night. RB Akrum Wadley was working behind a line that was down to its fourth and fifth starting tackles with true freshman Tristan Wirfs moving to left tackle and sophomore Levi Paulsen-normally a guard–opening at right tackle. Freshman left tackle Alaric Jackson was suspended from the bowl game for violating team rules. QB Nate Stanley was efficient in hitting 8-of-15 passes for 99 yards and a TD.

Defense: B. At times, the tackling was spotty, which proved to be costly vs. a physical Boston College offense that was led by AJ Dillon. But the Hawkeye defense rose to the occasion and dominated in the second half. This unit sealed it with a Josh Jackson interception with 1:18 to go and BC driving for the tying score. It was Iowa's third forced turnover of the game and Jackson's FBS-high eighth INT on the season.

Special teams: A. This unit provided a nice lift. In the second quarter, Akrum Wadley raced 72 yards on a kickoff return to the Eagle 16-yard line after BC had taken a 7-3 lead. Four plays later, Iowa tight end Noah Fant caught an 8-yard TD pass to give Iowa a 10-7 lead. Iowa kicker Miguel Recinos also did his part, nailing both of this field goal attempts from 24 and 38 yards.