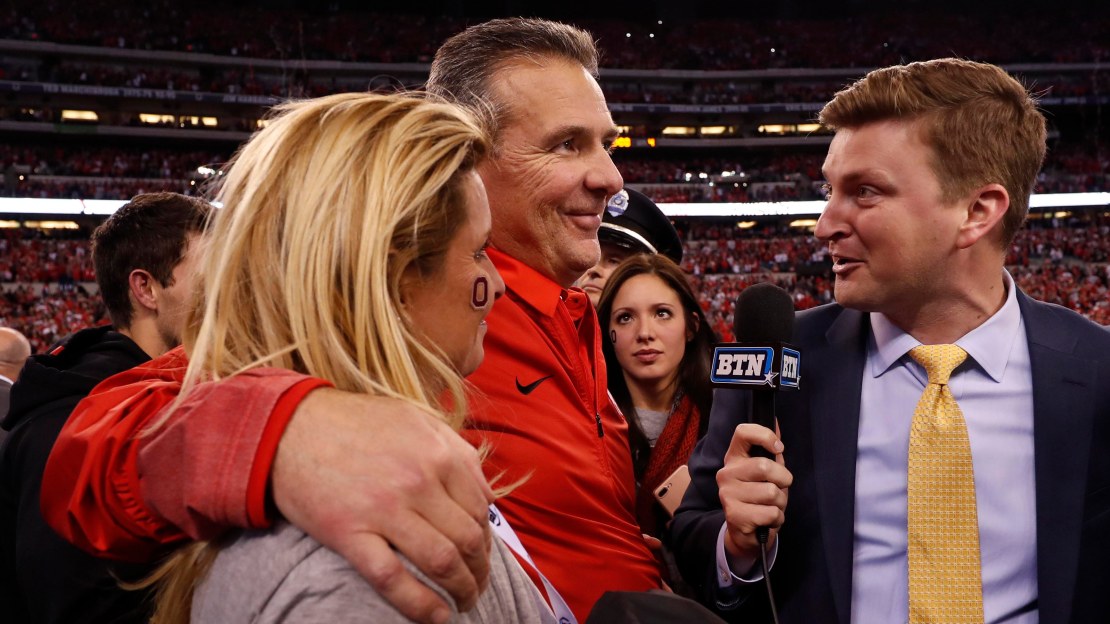 The dust is settling on the first early-signing period for college football. And this much is clear: Ohio State is cleaning up, owning the No. 1 class in the Big Ten and No. 2 in the nation, per 247.com.

While most schools inked the vast majority of their recruiting class today, we aren't finished yet. Blue-chippers remain to be plucked. The Buckeyes and the rest of the Big Ten will put the finishing touches on their 2018 class when the last signing period begins on Feb. 7.

Here is a look at today's goings-on from today.

BEST CLASS: Ohio State. Urban Meyer has had the top Big Ten class each year he has been at Columbus. But this year, a Buckeyes' haul that features 18 four- and five-star recruits is ranked No. 2 in the nation by 247.com. The unit is headlined by two, five-star recruits for the defending Big Ten champs: DT Taron Vincent and DB Jaelen Gill. Say it with me: "The rich keep getting richer."

BEST OF THE REST: Penn State. Some feel the Nittany Lions landed their most impactful class since 2006, as James Franklin has the second-best class in the Big Ten that has 12 four- and five-star recruits. The big prize on this day was landing DE Micah Parsons, a Keystone State product and the gem of this class. WR Justin Shorter is a rangy four-star prospect. And all-purpose back Ricky Slade is another headline talent.

BIG SURPRISE: Rutgers. Let's hear it for Chris Ash, who continues to lay a good foundation in Piscataway. His class ranks ninth in the Big Ten and is led by stud QB Arthur Sitkowski, a four-star talent. And no school needs better quarterback play more than the Scarlet Knights. There is good depth throughout this haul, which also is highlighted by athlete Daevon Robinson and wideouts Jalen Jordan and Zihir Lacewell.

THE RISING: Minnesota. P.J. Fleck worked recruiting magic at Western Michigan. And he's doing the same at Minnesota foe what looks like a Top 30 class, the best haul in school annals. A big emphasis was put on the offensive line, as the Golden Gophers landed two giants in Curtis Dunlap and Daniel Faalele from IMG Academy who are expected to help now. Keep an eye on four-star WR Rashod Bateman. And JC Victor Viramontes could be Minnesota's starting QB in 2018.

THE UNKNOWN: Nebraska. New coach Scott Frost hasn't had much time to assemble a class. What he inked today was a small group of players that ranks in the lower half of the Big Ten ? but it is a nice collection of talent that includes four, four-star players: TE Cameron Jurgens; QB Adrian Martinez; S C.J. Smith; DE Tate Wildeman. Frost and Co., could make noise in the next signing period in February. It's gonna be a lot of fun to see where Frost has the Cornhuskers in the 2019 rankings.

THE SLEEPER: Maryland. Since arriving in College Park, Md. Before the 2016 season, DJ Durkin has been a recruiting dynamo as he mines a wealth of talent in the "DMV" region-D.C., Maryland and Virginia. Now, for the first time in school annals, the Terps have back-to-back Top 25 classes. This group is led by DT Austin Fontaine and OT Jaelyn Duncan. Other studs are OT TJ Bradley, WR Darryl Jones, G Evan Gregory and CB Noah Boykin.

THE DISSAPOINTMENT: Northwestern. The Wildcats are riding a wave of three bowls in a row and are one win from notching a 10th victory in a season for the second time in four years. Plus, a glistening new facility is rising on the banks of Lake Michigan. Despite all of that, NU's class ranks near the bottom of the Big Ten. But Pat Fitzgerald knows what he's looking for and is tremendous at developing players. This year's gem is four-star DE Devin O'Rourke. CB Greg Newsome also is a cut-above. And keep an eye on QB Jason Whittaker and WR Jacob Jefferson.

THE CONTENDER: Michigan. Not much bombast out of Ann Arbor, but Jim Harbaugh quietly signed a top class that includes studs in TE Mustapha Muhammad; CB Myles Sims; LB Cameron McGrone; DE Aidan Hutchinson; OT Jalen Mayfield; OT Ryan Hayes. Will this be enough finally to get the Wolverines to the top of the Big Ten East? You have to think Michigan is inching closer to a big breakthrough.

BEST SIGNEES: There was no shortage of top players to sign with Big Ten teams. What team leads the way? Ohio State. No big shock. The defending Big Ten champion Buckeyes have seven of the Top 10 Big Ten signees, according to 247.com.

How the #NSD18 rankings stack up, at this moment.

(We ? you, @OhioStateFB & @PennStateFball.) pic.twitter.com/h1evIyMGKO