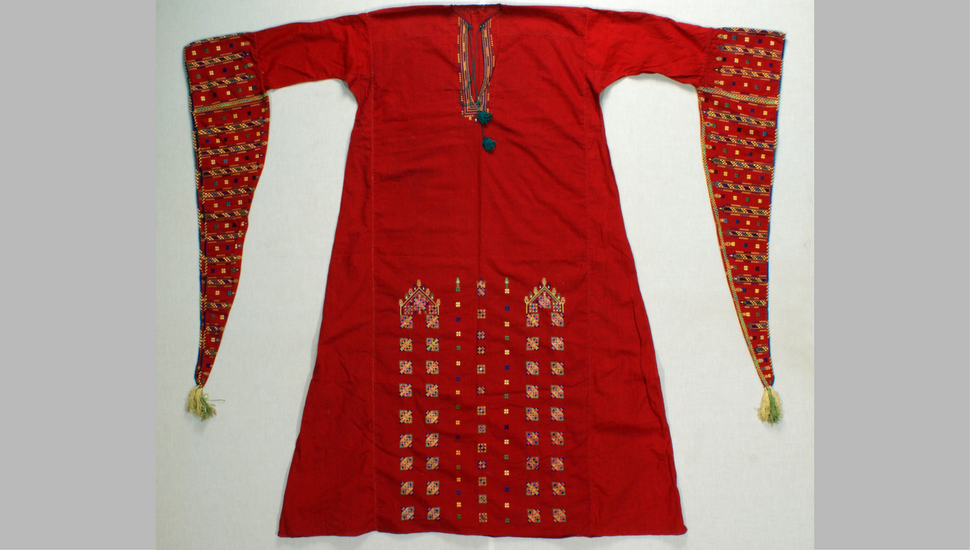 Where Africa, Asia and Europe come together you will find Syria, a nation which has long been an intersection of trading routes and cultures, where influences from far flung corners of the world have blended over time.

With much of our news these days is dominated by the ongoing strife in Syria, it is important that we acknowledge and celebrate this rich and dynamic cultural heritage and the humanity behind it.

At Indiana University's Mathers Museum of World Cultures, an ongoing exhibit examines the complexities of Syrian culture through the lens of fashion and textiles. As reported on the IU news service, the pieces in the exhibition are courtesy of Dee Birnbaum, a professor at Rhodes College, who has spent her career collecting clothing, jewelry and other items from North Africa, the Middle East and Central Asia.

The exhibit, entitled "A Different Look at Syria," seeks to supplant the political with the personal when it comes to this nation in crisis.

Exhibit curator Maggie Slaughter, a Clowes intern at the museum and a doctoral student in religious studies, said she chose items for the Bloomington-based exhibit to specifically focus on the intimacy of Syrian women's lives and how that relates to their traditional attire.

"One of the principal aims behind the project is to offer the everyday visitor a closer look at what Syria looks like, what it feels like to see the people wearing the garments that truly express their cultural identity," she said. "It's an opportunity to look into the rich history and cultural diversity of Syria, and not just a nation devastated by war."

According to Mathers Museum director Jason Jackson, the exhibit, which runs through January 21, 2018, is reflective of the institution's overarching mission to present a more multi-faceted view of global cultures.

Admission to the Mathers Museum is free and open to the public. In addition to the main exhibit, additional events include Stitching Syria: Crafting National Identities Through the Hands of Women, a discussion of the role women play in the cultural landscape of the nation and Roundtable on Syria, a discussion of "current political and social issues in Syria and the ramifications for refugees and host communities."