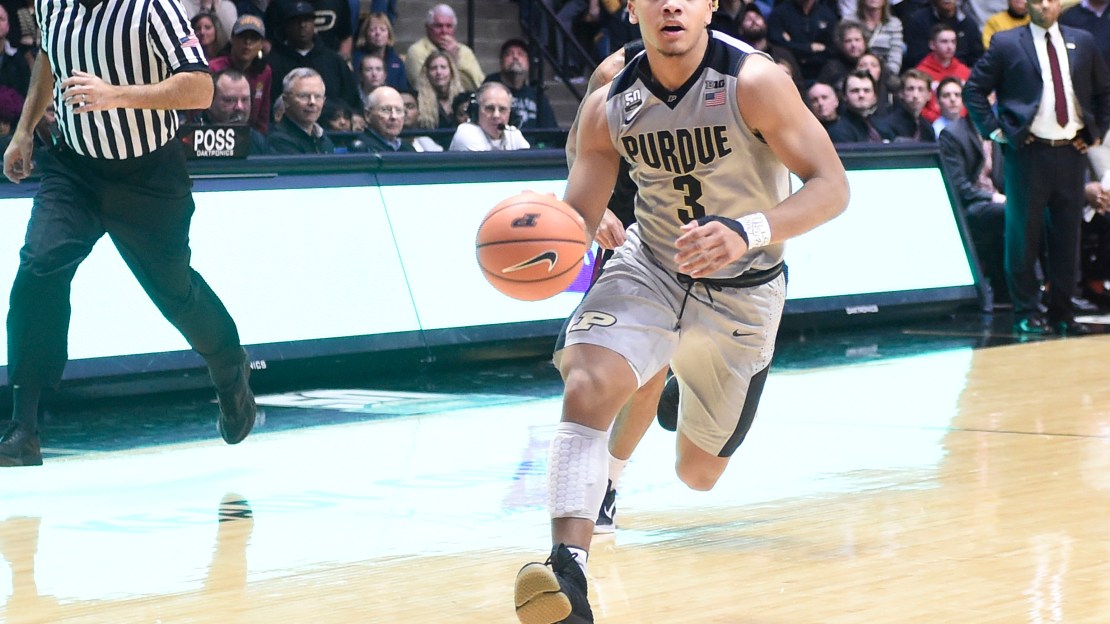 With each team playing a pair of early conference games last week, we learned a little bit about the Big Ten this year. While there have been a lot of questions about the strength of the conference following the Big Ten/ACC Challenge, the competitiveness will make for a tremendous and entirely unpredictable season.

Here's how my latest Big Ten Power Rankings, presented by ArcelorMittal, stack up.

1. Michigan State (9-1, 2-0). The Spartans haven't been perfect, but no one in the country has so far this season. December may be the most important month for Michigan State, but not for the games on the schedule. This team will benefit greatly from some practice time to clean up execution and certain defensive situations that has given it problems.
Last week: 1

2. Purdue (10-2, 2-0). The Boilers are beginning to play like an elite-level team. The guard depth and balance will keep them in games when Isaac Haas and Matt Haarms are limited by some of the conference's strong frontcourt players. The ceiling is high, but they'll still be tested by Big Ten opponents.
Last week: 3

3. Minnesota (8-3, 1-1). I'm not holding the loss at Nebraska against the Gophers, but they did show some certain vulnerabilities on the defensive end. Depth will be an issue, plus they'll receive the best effort from conference opponents as expectations are high for this team. A healthy Eric Curry would put them on another level.
Last week: 2

4. Maryland (9-3, 1-1). The Terps are still very young and they'll evolve a bit as the season goes on. Having Anthony Cowan and Kevin Huerter both capable of handling the ball and scoring is key, but the post activity of Bruno Fernando and Michal Cekovsky will be necessary in conference play.
Last week: 5

5. Northwestern (5-4, 1-1). It has been a rough start for the Wildcats, who still have high expectations. The approach last season was to achieve something special in reaching the NCAA tournament. This year they will have to bring the same level of intensity to make a return trip. That appears to have been the biggest issue early this year, however I see them beginning to turn it around.
Last week: 4

6. Ohio State (8-3, 2-0). The Buckeyes have been one of the most impressive Big Ten teams this season. While there is nothing flashy about them, they appear to have welcomed the coaching and teaching of Chris Holtmann and his staff. The fundamentals and principles with which they're adhering to mimic the recipe for success that has made Wisconsin so successful over the past 15 years.
Last week: 8

7. Penn State (8-3, 1-1). There are times when Penn State plays down to its competition, and that is a sign of youth. It is also a sign of a program that is not used to having the type of talent and potential that is present in State College. When the Nittany Lions force teams to play their game, and not simply try to match up with their opponent, they could end up being a top 5 Big Ten team. For them, it's all about belief.
Last week: 7

8. Michigan (8-3, 1-1). The Wolverines are an example of how important stability at point guard is. It wouldn't surprise me if they finish as high as fifth in conference, but it also wouldn't surprise me if they struggle from time to time and finish eighth. I'll keep them here for the time being, as I expect John Beilein to do what he always seems to do: teach and make his team better every day.
Last week: 6

9. Illinois (7-4, 0-2). I'm sold on the future of this program under Brad Underwood. It is a style of play that will require recruiting a specific type of athlete and player, but the pieces are there for them to be successful now. There will be some growing pains, which is to be expected anytime players are adjusting to a new system. The intensity and pressure will challenge Big Ten opponents from top to bottom.
Last week: 9

10. Indiana (5-5, 1-1). The Hoosiers are showing a willingness to compete, and they seem to be settling into a new system and coaching staff. While the process of building culture and accountability will take years, the potential to be competitive in the Big Ten is there now. This is particularly the case when Deron Davis is able to command attention in the post. He is very skilled and will be aggressive against some of the conference's notable frontcourt players.
Last week: 12

11. Iowa (5-6, 0-2). I've been encouraging Hawkeye fans to be patient with their team, but maybe I'm wrong. Maybe this team needs some pressure, as sense of urgency and intensity seem to be their biggest hindrance. I still love the individual pieces, but the swagger they had last season seems to be dormant. Someone needs to emerge as the alpha on this team if it wants to turn it around.
Last week: 10

12. Wisconsin (4-7, 1-1). Although Wisconsin was able to pick up a good road win at Penn State, I struggle to see how this team will be able to compete at a high level in conference play. The injuries to D'Mitrik Trice and Kobe King make it that much tougher. I hope the Badgers struggles don't take away from anyone's perception of how good Ethan Happ is, though. He'll earn every basket he makes this year.
Last week: 11

13. Nebraska (7-4, 1-1). The home win vs. Minnesota seemed all too typical of Huskers teams, but it's a reminder that the ability to be competitive in the Big Ten is there. That's particularly the case at Pinnacle Bank Arena, where Nebraska has a clear home court advantage. It's hard to imagine Nebraska maintaining that level of play, but developing chemistry and consistency could change that perception.
Last week: 13

14. Rutgers (8-3, 0-2). After seeing Rutgers play Michigan State in person, the growth, the belief and the potential of this program is steadily on the rise. Geo Baker is likely the future of this program, and if so, the future is bright. Winning five or six games in conference play wouldn't surprise me, and it would certainly be a step in the right direction.
Last week: 14