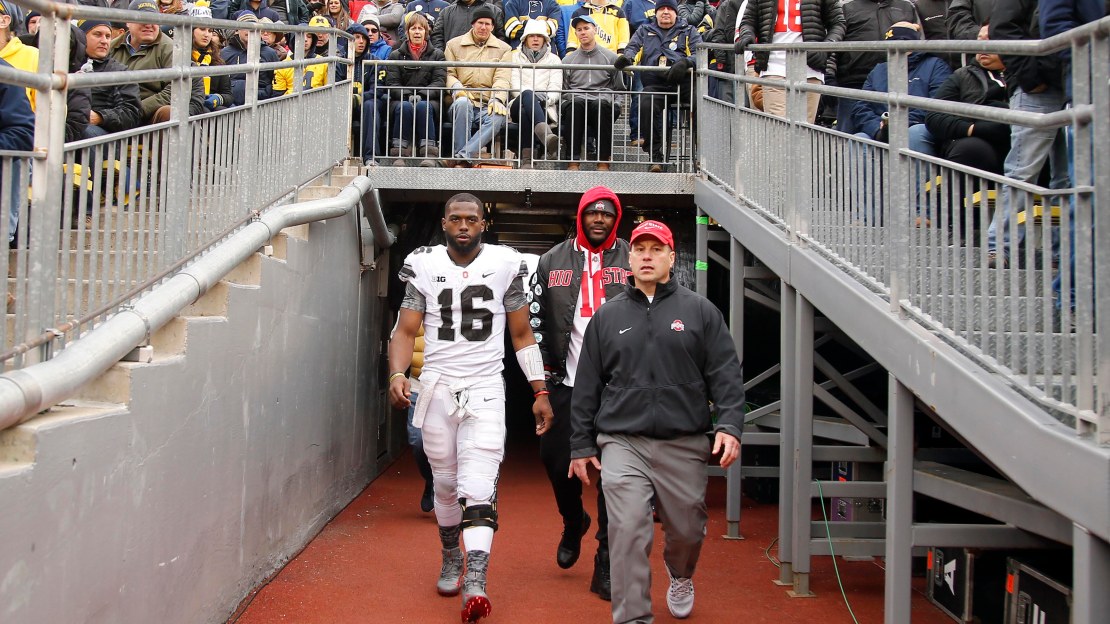 The sting of being left out of the College Football Playoff has subsided for Ohio State, as the Big Ten champs look for a strong finish in the Cotton Bowl vs. USC, a fellow college football blueblood. In fact, many feel the Buckeyes' clash with Pac-12 champ Trojans is one of the best postseason matchups.

The Buckeyes will be playing in their 48th bowl game and for the first time in the Cotton Bowl since Jan. 1, 1987, a 28-12 victory over Texas A&M. The Buckeyes and Trojans have met in bowls seven times previously. USC has won four of those seven games. The last time the two teams met was in 2009, an 18-15 win for the Trojans at Ohio Stadium.

Ohio State is 22-25 all-time in bowls and has won three of its last four contests. Urban Meyer is 10-3 in bowl games, including a 3-2 mark at Ohio State. This will mark the fourth consecutive year the Buckeyes will be playing in a New Year's 6 game, posting previous wins in the Sugar Bowl, CFP National Championship Game and Fiesta Bowl.

Ohio State is the only team nationally to rank in the top 10 in both total offense (523.6 ypg) and total defense (292.3 ypg). The Buckeyes also are the only team to average at least 250 yards passing and rushing.

USC holds a 13-9-1 series record over Ohio State. Seven of the meetings have been in the Rose Bowl.

USC, which played all of its 12 regular-season games in 2017 without a bye, was the first South Division representative to win the Pac-12 Championship game when it defeated Stanford, 31-28. This will be the second year in a row the Trojans will have played the Big Ten champ, toppling Penn State last season in the Rose Bowl.

Player on the spot: Ohio State QB J.T. Barrett. The senior gave a gutsy effort in the Big Ten title game, playing just days after undergoing knee surgery en route to leading the Buckeyes to victory over Wisconsin. Barrett has thrown for 2,939 yards with 35 TDs to rank eighth nationally in passing efficiency, and he has run for another 732 yards with 10 scores this year. He is the hub of an offense that ranks sixth nationally in total offense (523.6) and fifth in scoring offense (42.5). No doubt, SC LBs Cameron Smith and Uchenna Nwosu will be tracking Barrett.

Best individual matchup: Ohio State DE Nick Bosa vs. USC QB Sam Darnold. No doubt, Bosa will be pinning his ears back and coming after the star Trojan signal-caller. He paces the Buckeyes in sacks (six) and tackles for loss (12.5), earning Big Ten Defensive Lineman of the Year honors. Darnold is 20-3 as a starter and is on the verge of becoming the first Trojan signal-caller to throw for 4,000 yards in a season, entering this game with 3,787 yards passing and completing 63.7 percent of his attempts with 26 touchdowns. Darnold threw for 453 yards and five touchdowns with an interception against Penn State last season in the Rose Bowl.

Best unit matchup: Ohio State offensive line vs. USC defensive line. The Buckeye front is led by Rimington Award winner Billy Price. Tackle Jamarco Jones is an anchor on the edge for a unit that has gotten better as the season has progressed. OSU must deal with a Trojan front that helps USC lead the nation in sacks (43) and has 24 takeaways. Rasheem Green is the bellwether along the Trojan front, as he led the team with nine sacks.

Number: 7, times in a row USC has beaten Ohio State. The iconic programs haven't faced each other since a win by the Trojans in Columbus in 2009. It's the first time the schools have met in a bowl since the 1984 season, when USC downed the Buckeyes in the Rose Bowl.