Dienhart: Ohio State wins Big Ten, but is it playoff-bound? 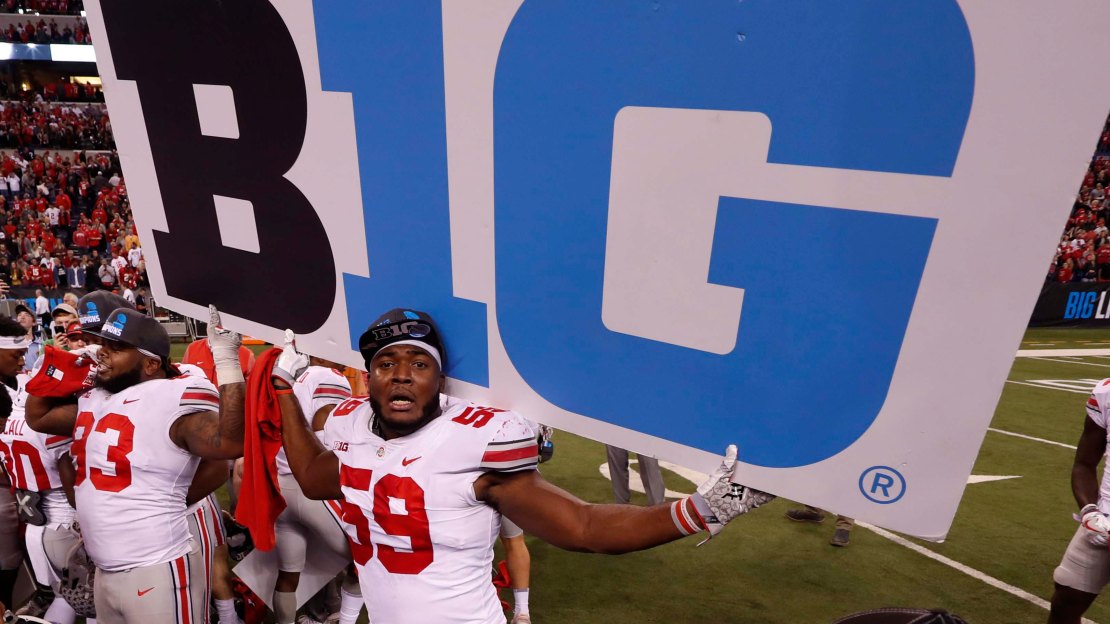 That notion seemed doubtful when news broke this week that star Buckeye quarterback J.T. Barrett had undergone knee surgery after suffering an injury in last week's win at Michigan. Could Barrett still play? If so, how effective would he be?

Turns out, Barrett was plenty good enough on this night to lead the No. 8 Buckeyes to a 27-21 win vs. No. 4 Wisconsin to take the Big Ten title for the first time since 2012 ? along with a possible playoff bid. More on that later.

"Hat's off to him," said Wisconsin coach Paul Chryst amid the din of celebration. "For him to do what he has done, you have to have a lot of respect for him."

Barrett's performance was one for the ages. He hit 12-of-26 passes for 211 yards with two touchdowns and two interceptions. He also ran a game-high 19 times for 60 yards and a score. But this effort wasn't about Barrett's numbers. This was about guts, courage and grit.

To not just play-but to play effectively after undergoing a surgical procedure-was nothing short of remarkable. It's the type of effort that will make him as an all-time Buckeye great. But, heck, he was already that before this game. This contest just further solidified his legacy. Now, Barrett can author another chapter in his great career if Ohio State can get into the four-team College Football Playoff.

Ohio State will find out its fate on Sunday, hoping to make the playoff for a second year in a row. For all intents and purposes, Clemson, Oklahoma and Georgia wrapped up three of the four spots by winning their respective league championship games on Saturday.

The fourth slot figures to go to either Ohio State or Alabama. The Buckeyes were No. 8 in the last poll; the Crimson Tide were No. 5. Losses by No. 2 Auburn, No. 4 Wisconsin and No. 7 Miami create room for OSU and Bama to move up and make a case to join No. 1 Clemson, No. 3 Oklahoma and No. 6 Georgia, which will move up, in the likely playoff field

Who has the better resume between Ohio State and Alabama? No doubt, Ohio State has positives, including wins over Top 10 teams Wisconsin, Michigan State and Penn State. A 31-16 home loss to Oklahoma taints the OSU resume. But the biggest stain is a 55-24 loss at Iowa.

Alabama's resume doesn't glisten but has positives. The best wins? At Mississippi State and vs. LSU. And the Crimson Tide got beat at Auburn, which got drummed by Georgia today. How impressive is that body of work, especially compared to Ohio State's?

It's up for debate. But the fact Ohio State is a conference champ and Alabama isn't may tip the scales in the Buckeyes' favor. That said, the committee put the Buckeyes in last season despite not winning its division, let alone conference, so the precedent has been set.

"I don't know how you keep him out," said Meyer, who noted Barrett underwent as much as 15 hours of therapy a day to hasten his recovery. "I had one other player have a scope and play in week."

Meyer said there was no structural damage in Barrett's knee and that the injury couldn't get worse. It was just a matter if Barrett could withstand the pain.

Credit also must be given to the Buckeye defense, which limited Wisconsin to 298 yards even though it was averaging 426.0 yards. The vaunted Badger ground game had just 60 yards on 32 carries after it entered the game averaging 243.3 yards. OSU also got after Wisconsin quarterback Alex Hornibrook, who hit only 19-of-40 passes for 229 yards with two picks.

"We knew running the ball was a big part of their offense," said Ohio State linebacker Jerome Baker, who led the team with 12 tackles. "We took a lot of pride in stopping it.

These teams met in the 2014 Big Ten title game. And the storyline for Ohio State was hauntingly similar with the Buckeyes suffering an early-season-non-conference loss (to Virginia Tech in 2014 and Oklahoma this year) and a late-season injury to Barrett.

We know what happened on that night. Fast-forward two years, and Ohio State found itself in a similar spot, with Barrett entering the game with an injury. Barrett underwent surgery this week and was listed as a "game-time decision."

But unlike back in 2014, Ohio State didn't have to turn to a backup, which would have been redshirt freshman Dawayne Haskins. Turns out, Barrett was just fine. In fact, he was more than fine. He was outstanding.