The Buckeye Bullet is proving just how fast a green machine can go: BTN LiveBIG 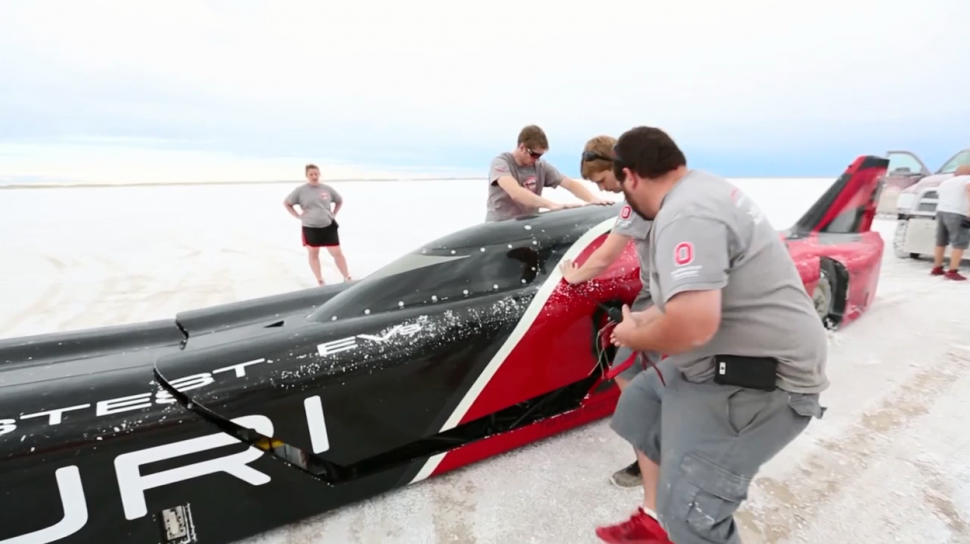 Here?s an interesting fact: more people have walked on the surface of the moon than have driven 400 miles per hour.

But, if The Ohio State University student engineers and designers helming the Venturi Buckeye Bullet team meet their goals, they?ll chipping away at that ratio. Their long and lean automobile has already top 350 miles per hour at the famed Bonneville Salt Flats proving ground, but it is what?s under the hood that?s really turning heads: the Buckeye Bullet is a completely electric vehicle.

?We want to show the world what this technology can do,? says Michael Johanni, a former student team leader turned staff advisor to the team. ?Automotive innovation is born on the race track, and we?re pushing the limits to see what is possible.

Since 1993, Ohio State has been at the leading edge of electric vehicle racing as a founding member of the intercollegiate Formula Lightning Racing series. Over the years, the university has pivoted from head-to-head racing to setting landspeed records with their various Bullet iterations: 1, 2, 2.5, and now the Buckeye Bullet 3 which holds the landspeed record for an all-electric vehicle.

Another remarkable fact about the Buckeye Bullet team is that its members aren?t executing the vision or research of professors. Rather, the team and every design decision and engineering choice is completely student-led.

?While we?re very committed to going fast and pushing technology, the most important thing we do here is train students,? says David Cooke, who, like Johanni, is a former team member turned faculty advisor. ?When you take a project like this, it really teaches students to think in a new way.?

For students like Peter Bruce, working on the team has been the opportunity of a lifetime, and one that, despite an extensive college search, he didn?t come close to finding anywhere but at The Ohio State University. An inveterate racer who has been tearing up tracks since the age of 12, Bruce says that the chance to apply his knowledge outside the classroom has been invaluable.

?Being on the Buckeye Bullet team allows us to get practical experience that we wouldn?t have otherwise,? says the leader of the team?s mechanical group. ?It really puts us ahead of other students in our field, and it?s a just a great opportunity to learn further than you would in the classroom as well as put your knowledge into a really cool project.?

Beyond breaking the 400 mile per hour mark, the Buckeye Bullet team hopes to effect real change in how electric automotive technology is viewed by and ultimately embraced by the public. While many still view electric vehicles as clean, but boring, the technology being developed for cars like the Buckeye Bullet will go a long way towards showing how an electric vehicle can perform.

?The industry is going towards electric more and more,? Bruce notes. ?A lot of the research and development that is going into our vehicle, we?re hoping that people will see and want to put into their vehicles. The fact that it is students coming up with this research and this data, it?s really setting a precedent for The Ohio State University.?