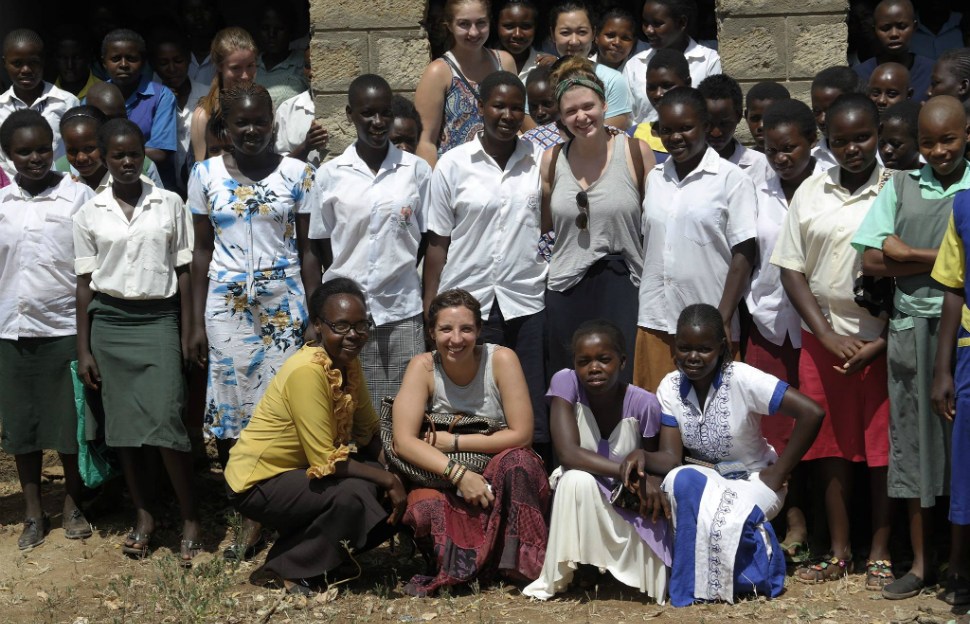 Lesley Sager's work in Kenya started with building houses, but quickly became about building up the people who lived in them.

In the spring of 2012, Sager asked her students at the University of Wisconsin?s School of Human Ecology to help design a shelter for people displaced by natural disasters.

This assignment led Sager and some students to travel to Kenya to research how best to implement their shelter designs, which used water-resistant cardboard structures for housing frames. The professor's class also brought laptops and other materials with them. But Sager saw the locals in need of much more than physical items or a new design for a shelter.

During another trip to the country a year later, Sager identified the best way to provide a more sustainable way to help.

On a 2013 trip to Kenya, Sager was introduced to Aniceta Kiriga, the founder of the Tharaka Women?s Welfare Program. The goal of Kiriga's work is to eliminate female genital mutilation (FGM), a practice the World Health Organization categorizes as "a violation of the human rights of girls and women," but one that a number of Kenyan women are still forced to endure. Though the country banned FGM in 2011, the Guardian reported that 21% of the women and girls in the country underwent the procedure in 2014. As part of the procedure, girls participate in a ceremony and receive gifts, which is intended to serve as a rite of passage into adulthood though FGM often leaves women with a lifetime of medical problems.

Though the number of women and girls undergoing FGM has decreased significantly over the last several years, the number is still larger than Kiriga's goal: zero.

When Sager learned of Kiriga's efforts, she decided to work with her to create another way to empower the women of Kenya.

?What Aniceta asked the women was, ?If we give you the gifts, the ceremony, the food, the rest and the education, would you be OK not going through FGM?? And they were,? Sager said. ?So she developed an alternative right of passage and I got to learn about that when I was there.?

Kiriga?s program reached more than 250 girls per year when Sager met her. To increase that number, the Wisconsin professor launched Merry-Go-Strong, a nonprofit that helps Kenyan women earn a regular income so that they aren?t forced to undergo FGM.

Merry-Go-Strong provides Kenyan women with materials to weave baskets and sew bags, which the locals call viondo. Sager then buys the goods and brings them back to the U.S., where they are sold at markets around Wisconsin. The proceeds from the bags go to more projects that assist the Kenyan women, including to Kiriga?s organization, which has also developed an annual Alternate Rite of Passage ceremony.

The money also goes to paying the makers of the baskets and bags. The average family in Kenya earns the equivalent of $24 per month, so any additional income is very useful to the people in need.

?Access to money was still a challenge and school fees are really, really difficult for a lot of families," Sager said. ?So a lot of the girls weren?t able to afford school and ended up back into poverty. Aniceta made the realization that we should focus on mothers, since they can help mold the future for their children. So what I decided to do is find ways to provide women the opportunities to develop an income and feed their families, so they can provide an education for their daughters.?

Sager also asks her students to help out by continuing to think of ways to improve daily life in Kenya. Her course – Design Studies 501: Design Thinking-Inspire, Innovate, Implement- is a think tank for ideas. In 2016, students developed a light source that kept energy costs down while allowing the women in Kenya to work longer on the goods for Merry-Go-Strong.

The professor still goes to Kenya once or twice a year to meet up with Kiriga and see how the progress in the fight against FGM is going. Through creative ideas, and beautifully made goods, Sager is hopeful that the issue will soon be gone for good.