Dot Commentary: Which is the best Big Ten rivalry trophy? 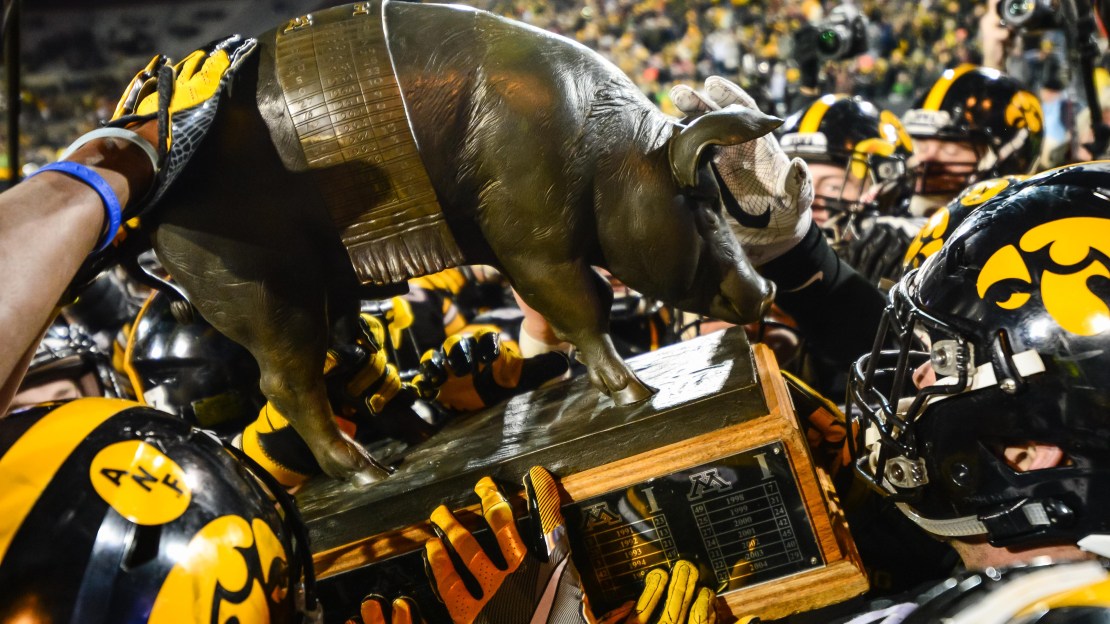 The Big Ten in particular is known for its rivalry trophies, which are battled for as the season winds down–especially during the final week of the regular season. Some trophies are newer than others, but they all have some sort of back story that makes each one unique. With so many taking center stage this weekend, the only logical thing for the BTN.com team of Tom Dienhart and Alex Roux to do is choose which one they like best. So whether you're meal prepping or waiting for that Thanksgiving food baby to pass, have fun reading, learning and disagreeing with the answers to this question:

Which is the best rivalry trophy in the Big Ten?

There are a lot of things to like about the Big Ten: storied history, legendary programs and top rivalries. The league also has myriad iconic trophies. The Old Brass Spittoon (Indiana-Michigan State), Illibuck (Ohio State-Illinois), Paul Bunyan's Axe (Wisconsin-Minnesota), the Old Oaken Bucket (Purdue-Indiana), The Cannon (Illinois-Purdue) and the Little Brown Jug (Minnesota-Michigan). But the best trophy of all is Floyd of Rosedale, given to the winner of the Iowa-Minnesota game.

I mean, it's a bronzed pig, for crying out loud. How can it get any better than that?

Both are lame. Floyd of Rosedale? Cool.

The bronzed bauble was introduced in 1935. Yes, at one time, Floyd was a real, live squealing pig. Later, Floyd was immortalized forever into a beautiful 98-pound piece of art suitable for any mantle.

The genesis of Floyd began with Minnesota Gov. Floyd B. Olson, for whom the trophy is named. He is the one who offered up the idea of the winner between Iowa-Minnesota taking home a prized hog to cool tensions between the schools.

And just like that, the greatest rivalry trophy in college sports was born.

Before laying out my reasoning for why Paul Bunyan's Axe is the coolest rivalry trophy, I've got to ask: Why does Minnesota get a monopoly on all the best trophy games? Between the jug, the pig and the axe, Minnesota could have the coolest mantle in the Midwest. Maybe P.J. Fleck can get the Gophers to the point where they're winning all three more often. But let's focus on the Axe for now.

One thing the Axe has going for it is its size. Have you ever seen The Cannon that goes to the winner of Illinois/Purdue? It's pretty underwhelming when a massive football player hoists such a puny thing. But there's no such issue when the Gophers or Badgers haul that Axe around. With a six-foot long handle on which the final scores throughout the series are inscribed, the wooden trophy as a whole is monstrous. And since the series (currently tied at 59-59-8, and Wisconsin has never led!) lays claim to the most games played between two teams in any rivalry, anywhere, the size of the Axe is warranted.

The Axe is also the best because it really provides the only opportunity for grown men to run around brandishing a (fake) weapon without getting arrested. Unless you're a lumberjack, swinging an axe around in public is generally frowned upon. But if you win the annual Wisconsin-Minnesota game, you can hoist it, swing it or–as was tradition until a brawl nearly broke out a few years back–use it to mock-chop down your defeated opponents' goalposts. Is there anything that gets the juices flowing more than swinging a giant axe around after winning a football game? If there is, I'd like to hear it.

I could go on, but you get the idea. And for a pair of states as outdoorsy as Minnesota as Wisconsin, the Axe just fits.