Dot Commentary: Which is the B1G's best football stadium? 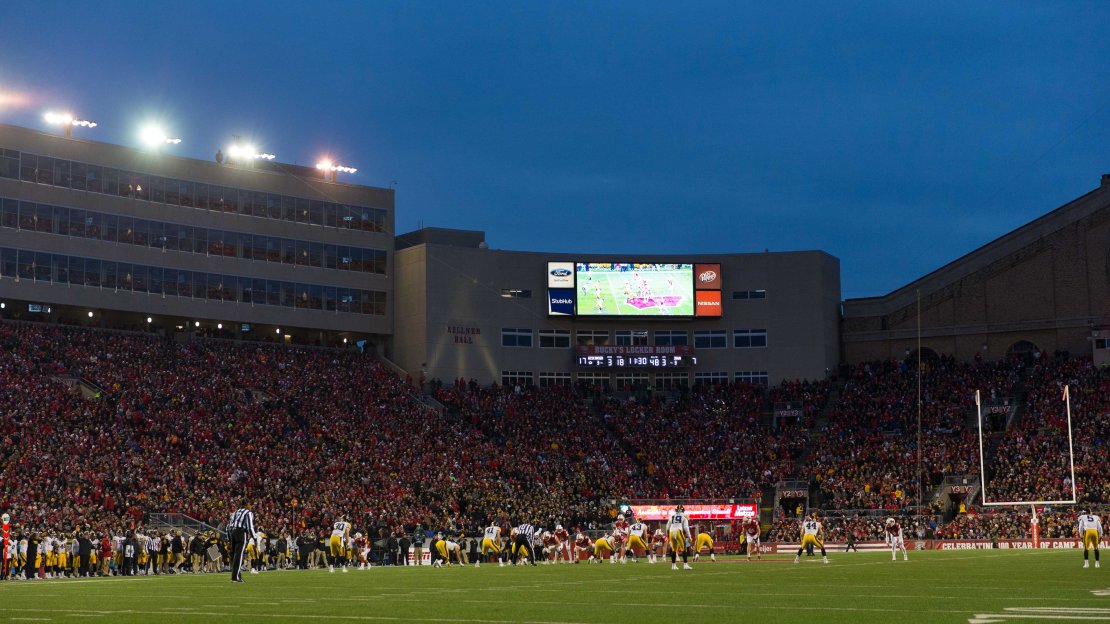 The Big Ten is blessed with some of the best stadiums in not only college football, but in all of sports.

With so many great options to choose from, choosing the "best" stadium in the conference comes down to subjective preferences. The band, the game day traditions and the impression a visit left on you can all contribute to the aura surrounding the venue and be determining factors in your pick.

Those are the hairs we asked BTN.com's Tom Dienhart and Alex Roux to split to answer this week's Dot Commentary question: Which is the best football stadium in the Big Ten?

No other Saturday afternoon cathedral in the Big Ten rocks and rolls like this ancient place, opened in 1917. From kickoff to the final gun, it's like a frat party on a Friday night. The land that the edifice sits on was originally used for training Wisconsin troops during the Civil War and is named after Wisconsin's first wartime governor, Alexander W. Randall. How cool is that?

But it's what goes on inside today that makes Camp Randall the place to be on Saturdays from September to November. The stadium is shaken to its foundation by "Jump Around," a song by the House of Pain that is cranked up between the third and fourth quarters. If you are in the press box, you can feel it sway. Pretty scary and pretty neat, all at the same time.

All of this mayhem is capped by the "Fifth Quarter," a postgame concert by the band that has fans singing along to "On, Wisconsin," and to the Bud Song with altered lyrics: "When you've said Wisconsin, you've said it all!"

On top of all that, the brand of football played for the last quarter century in Camp Randall has been among the best in America.

So, before you die, get yourself to Camp Randall Stadium to soak in all the glory of what makes college football in the Midwest so special.

This was actually one of the harder Dot Commentary topics to make a decision on, because there is no real wrong answer here. The Big Ten is home to the three biggest stadiums in the United States, and several of the other ones holding less than 100,000 people are just as iconic. And embedded in the fabric of college sports is the fact that a lot of these stadiums are ancient by modern standards, but have upgraded to add seats and amenities while preserving historical significance of the buildings themselves.

I've been to games at The Big House, Ohio Stadium and Camp Randall and was blown away at the atmospheres of all three. But the biggest impression a stadium left on me that has stuck with me to this day came through a TV screen, when No. 22 Illinois was welcomed by No. 12 Penn State and a White Out at Beaver Stadium in September 2008. That was the first time I'd really watched a Penn State home game on TV, and the endless seas of people on that prime time ABC telecast projected an environment like nothing I'd ever seen in a sporting event. The perception that Penn State had the best stadium and best home-field advantage was crafted in my teenage mind by the 109,626 who showed up in white with pom poms that evening–and that perception still persists today.

I realize this is a somewhat silly opinion to hold without having been to a game at Beaver Stadium (or Memorial Stadium in Nebraska, for that matter–another awesome venue) while having attended the other Big Ten cathedrals on game day at one point or another. But I have been to State College on a non-game day, and Beaver Stadium's absurd dimensions and mythic proportions in a town that couldn't fill it with its entire population stick out like something out of a comic book.

Sure, luxury boxes and modern facilities have been added around the edges of the 57-year old venue along the way, but a huge emphasis has been on adding more seats wherever possible. Just seats on seats on seats, and the asymmetry of the additional stands contributes to an overwhelming fan presence on game day. Every game, crowd shots pan over clusters of fans without a concourse or skybox in sight. In my opinion, that vibe separates Beaver Stadium from other cookie-cutter stadiums and tidy venues that would make an architect proud but lose some of the unique ambiance of college football.

Beaver Stadium is proof college football doesn't need corporate fan zones or a new taxpayer-funded stadium built every 25 years like in the pros. Six-figure crowds losing their minds on a Saturday will do.