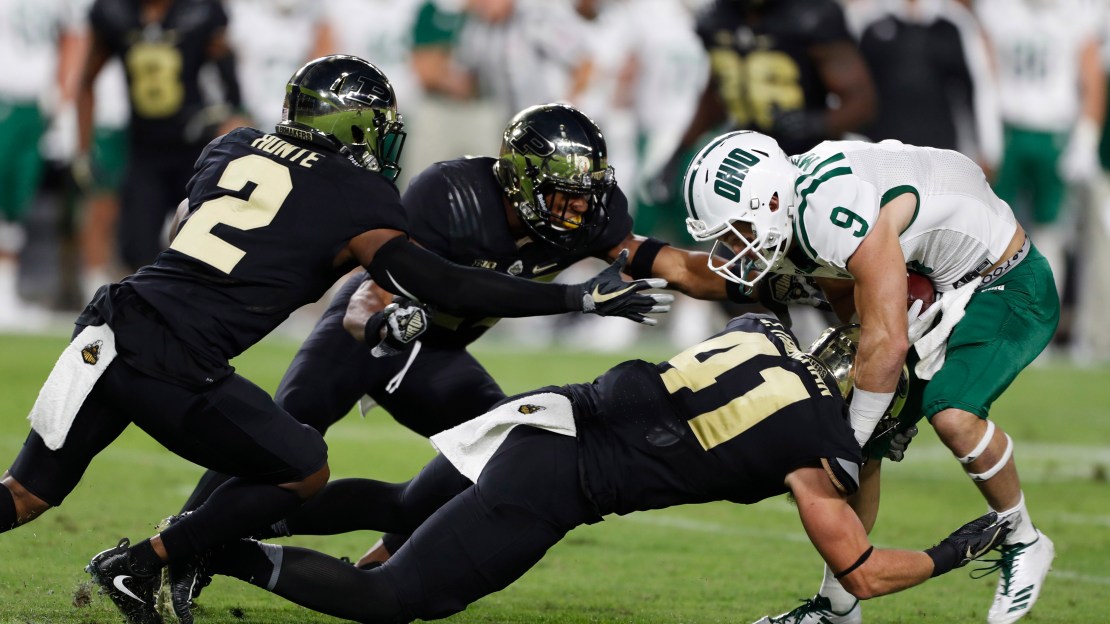 The calendar says "November," and Purdue is in contention for a bowl game. Few could have envisioned that back in August, as new coach Jeff Brohm settled in for his first season in West Lafayette to begin to clean up the wreckage from the previous staff. A big reason for the unexpected success in 2017 of the Boilermakers (4-5 overall, 2-4 Big Ten) has been defense.

The 6-1, 210-pound junior safety from Noblesville, Ind., Thieneman ranks No. 3 on the team in tackles with 50 to go along with 4.5 TFLs and two sacks. Not bad for a guy who arrived on campus as a walk-on. The mechanical engineer major made a spectacular diving interception last week in a win vs. Illinois. Coaches love his savvy and underrated athletic ability.

I caught up with Thieneman as he prepped for a game at Northwestern, one of the Big Ten's hottest teams as it comes off three OT wins in a row.

Q: You have had time to watch film. What do you think of Northwestern?
A: They are a good, solid team. They will try to get us on the edge with the run game running a lot of stretch. A lot of mesh routes. They will attack our weaknesses on defense. They know their opponent well. And they know how to attack them. We have to be ready for it.

Q: When you saw your diving pick from last week on film, what did you think?
A: I was pretty happy about it. It was probably one of the best plays I've ever made. Going into it, I saw the arrow route on third-and-14 and I saw the tight end try to get behind me, so I just watched the quarterback's eyes and made a play on the ball.

Q: Who is the hardest hitter on the defense?
A: Ja'Whaun Bentley. One time, a tight end caught an out route, he hit him high and just completely stopped his momentum and put him on his back. He is known for being a heavy hitter.

Q: How would you describe Jeff Brohm?
A: Jeff Brohm is extremely competitive, an extremely intense coach that cares for and loves his players. And he wants to win.

Q: His son Brady is a big part of the team. What's his role?
A: He brings a lot of energy. There's always trash talk between receivers and defensive backs, and he joins right in. He is pumping us up on the sideline. He is fun to have around.

Q: Who is the toughest guy for you to tackle on the Purdue offense when you scrimmage?
A: That is a tough one. I'd probably have to say Richie (Worship). He is a load.

Q: Who is the loudest coach?
A: Coach Shep. (WR coach JaMarcus Shepard). No doubt. By far. We call him the "juice" coach.

Q: If you can pick two teammates to play with you in a 3-on-3 hoop tourney, who are you taking?
A: Rob Simmons and Elijah Sindelar.

Q: Have you talked to David Blough since he suffered his season-ending injury?
A: I have talked to him a little bit. He is doing well, hanging in there. I told him to keep his head up, we are praying for you and we love you. He will be back. He's a fighter. He will be all right.

Q: Who were you a fan of growing up?
A: Growing up, I was a Colts fan, a White Sox fan and a Pacers fan. Bob Sanders was my guy.

Q: What are you currently watching on TV?
A: I am into "Stranger Things." That's a favorite now. And "Shameless." Those two.

Q: What is your toughest class this semester?
A: ME 475, it is a senior-level control systems class.