How the International Writing Program brings Iowa to the world: BTN LiveBIG 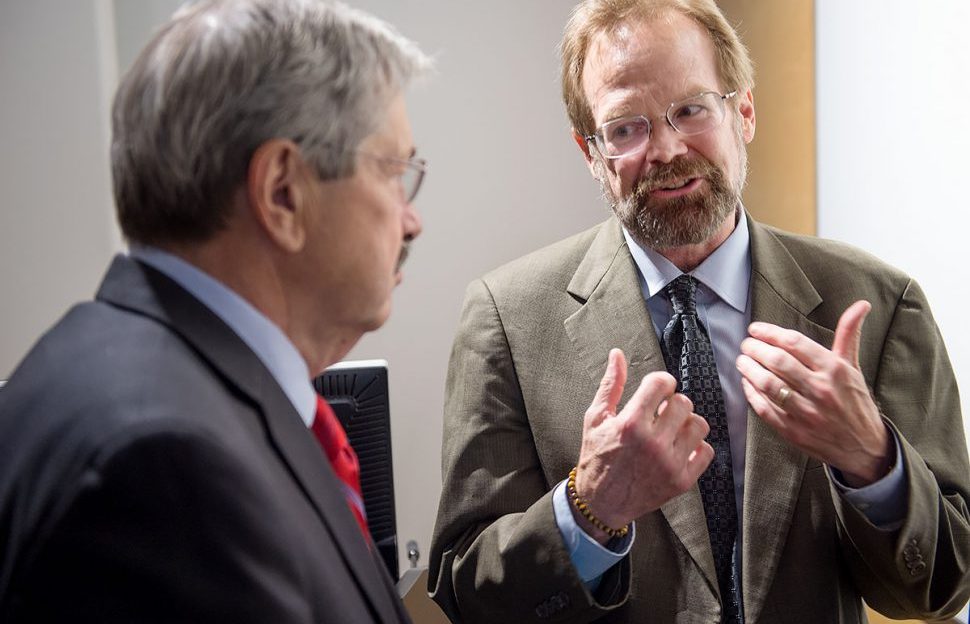 In order to serve his mission as director of the International Writing Program at the University of Iowa, Christopher Merrill is spending this week in Armenia some 6,000 miles away from IWP's home in Iowa City. Last week he was in Portland, Oregon and Washington, D.C.

In the fifty-year history of the IWP, the organization?s fall residency has become a legendary brass ring for writers from around the world who wish to develop their skills. But just as important is bringing what Merrill calls ?the Iowa model of writing? to all corners of the globe.

?In my tenure, as a result of our interactions with the State Department, we've started to think of cultural diplomacy more as a two-way street,? says Merrill.

Since 2011, he has served on the U.S. National Commission for UNESCO and in 2012 was appointed to the National Council for the Humanities. Throughout his career, including on behalf of the U.S. State Department, Merrill has used the art of words to bring the world closer together.

An author on subjects as diverse as soccer, the Balkan War and nature, Merrill works in poetry and prose, offering forth his own words and translating the works of others for wider consumption. His most recent book is Self-Portrait with Dogwood, a memoir of reflections about his life set against the backdrop of nature.

BTN LiveBIG talked to Merrill about the role of cultural diplomacy in times of strife, whether good writing can be taught and why the topic of nature is so crucial at this moment.

BTN LiveBIG: You wrote a paper in 2005 for the State Department called ?Cultural Diplomacy: The Linchpin of Public Diplomacy.? Why is cultural diplomacy important right now and what role does IWP play in that?
Christopher Merrill: The initial idea of the IWP was that if we brought together writers from around the world and gave them the chance to interact with writers from countries their own countries were at war or at political odds [with] then that would be useful not only for their work but for the larger diplomatic purpose of creating a space in which [a] free and frank exchange of ideas and impressions might take place. And, you know, that there might be a spinoff benefit for the U.S. in the sense that we would help to build up that reservoir of goodwill that every country depends upon.

That's been an operating principle of what we do. So when we go out to a place like a Somali refugee camp in Kenya or to Ukraine, as we did last year, or Afghanistan or Iraq or the Congo, we're hoping to introduce ideas that are central to the American experience – freedom of expression, what our Constitution is about, the importance of honoring different perspectives –
as well as, on a most basic level, talk about how we become writers: how poems get written and novels get written and plays get put together, that sort of thing.

BTN LiveBIG: This is the 50th anniversary of the IWP. From your perspective, what is the accomplishment that's had the greatest impact?
Merrill: We give writers that space and time in which to develop their talent as well as they can. And enough stimulation in terms of programming that gives them contact with writers from so many different literary traditions that, with any luck, they become better writers when they leave.

The effect of that is it cements in the public imagination the centrality of the University of Iowa. Not just in American literature, but in world literature. And it creates friendships and literary networks all around the world. So if you've been in the IWP on some level you have literary friends now in every land.

BTN LiveBIG: What role does literature serve in the political moment we're in now?
Merrill: That's actually a question of continuing interest in our program. The relationship between literature and politics is always thorny. We are all political beings. We all pay attention to politics, particularly at a complicated moment like this. And each writer will approach political issues from different angles. If journalism is the first draft in history one likes to think that poetry or fiction might provide more enduring visions of what happened at a particular moment in history.

BTN LiveBIG: You've written war journalism, poetry and, most recently, this lovely memoir with the backdrop of nature against it. Is there a particular form that you're drawn to more than others?
Merrill: Well, I think if I had my druthers I would write poetry all the time but the fact is that everything that comes to me comes in different rhythms or within different forms. But then there are other writing obligations. I write a lot of essays. I write introductions and afterwords and blogs and things like that. I hope that what I do is make myself available to whatever might come down the pipes.

BTN LiveBIG: Has nature always been a source of inspiration for you?
Merrill: The short answer is yes. I love to hike. I worked as a gardener for a long time. As it happens, I was the poetry editor for Orion magazine for 10 years. I edited an anthology called the Forgotten Language, Temporary Poets in Nature.

So I would like to think that I'm open to different kinds of subjects, but there is an abiding love of nature and, particularly in the age of climate change, just a deep anxiety about what we have done to the earth and continue to do to it in the face of so much scientific evidence that we are doing great damage. I think as a writer I have an obligation to try to point that out in whatever artful ways I can as a stay against that form of confusion.