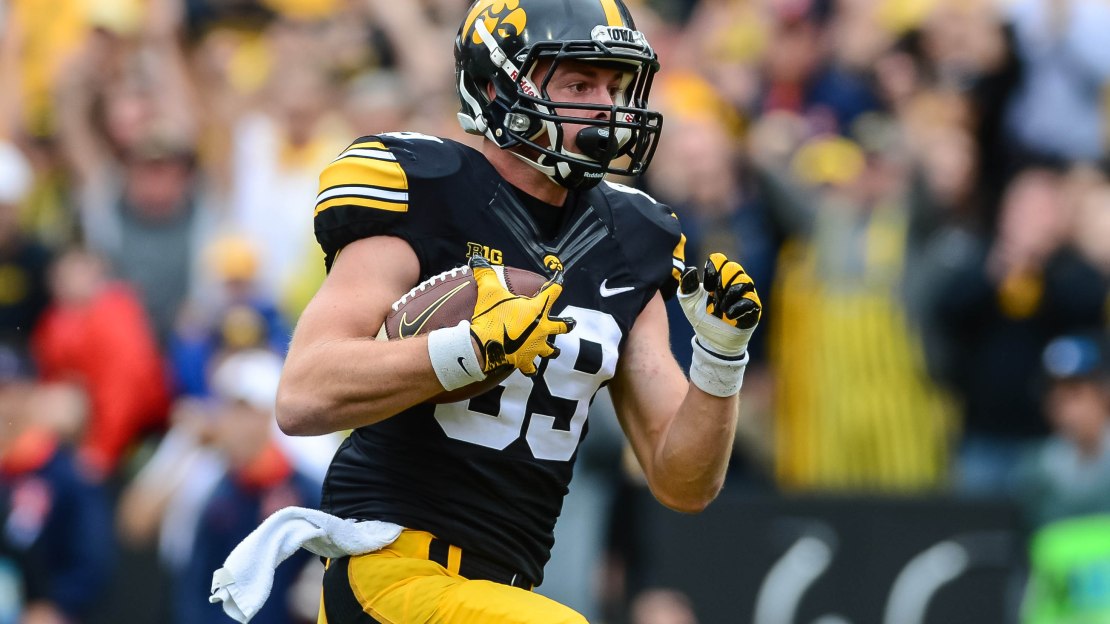 So far, so good for Matt VandeBerg.

The Hawkeye wideout has stayed healthy through the first half of the season for Iowa (4-2 overall; 1-2 Big Ten). And, he' like to keep it that away after dealing with injury last year.

VandeBerg went down with a foot injury last season and then re-injured the same foot in the offseason which caused him to miss spring ball. He was enjoying a nice start to the 2016 season, catching 10 passes for 284 yards and three touchdowns in four games before suffering his season-ending injury. Without him, Iowa's passing attack finished 13th in the Big Ten (153.2 ypg). This year, Iowa ranks No. 7 in the Big Ten in passing (218.0 ypg).

The 6-1, 185-pound senior from Brandon, South Dakota, has 15 catches for 186 yards and two TDs this season for Iowa, which plays host to Northwestern this Saturday. His 15 receptions rank second on the team to Nick Easley, who paces the squad with 27 catches for 281 yards and four TDs.

I caught up with VandeBerg as he prepped to play the Wildcats.

Q: How is your foot? Is it holding up?
A: It is doing great.

Q: Who impresses you among the wideouts on the staff?
A: It is a bunch of guys who want to get better each day in practice. That's where it all starts. We have a lot of young guys, a lot of first-year guys who are seeing the field. They got themselves in position to get on the field early.

Q: Who has the best hands among the receivers?
A: I have to say myself, right? But we all have great hands. I don't think there is any weak link in the system.

Q: Who is the fastest receiver?
A: Ihmir (Smith-Marsette) can stretch the field pretty good. He can run. He can run pretty fast. Probably him.

Q: Who is the best blocker?
A: Brandon Smith is a good one. But we all can do a good job on the perimeter. For a team that runs as much as we do, you have to be able to block.

Q: What impresses you most about Nate Stanley?
A: His composure. His calmness. Whether it's a big play or a bad play. Being able to come back and do whatever is needed to be done on the next play.

Q: What is your favorite route?
A: The one that gets me open. I am excited about any pass route.

Q: Few will forget when you proposed to your girlfriend last year after making seven catches for 129 yards and a TD in a 42-3 win vs. Iowa State. How is married life?
A: We got married May 19 this year. Married life is good.

Q: What do you two do for fun?
A: We pretty much just hang out. We have bowled a few times. Her family is really close in proximity.

Q: The University of Iowa Stead Family Children's Hospital overlooks Kinnick Stadium. The crowd waves to the children's hospital at the end of every first quarter. What does the new tradition mean to you?
A: It is awesome. It is an incredible thing to be able to give back. For us to be able to see them during a game and give them a wave is great. Let's them know we are thinking about them.

Q: What do you think of Northwestern, which is coming off a big win at Maryland?
A: A tough team that is well-coached. They want to win each time they step on the field.