How Maryland researchers are improving reading for the visually impaired: BTN LiveBIG 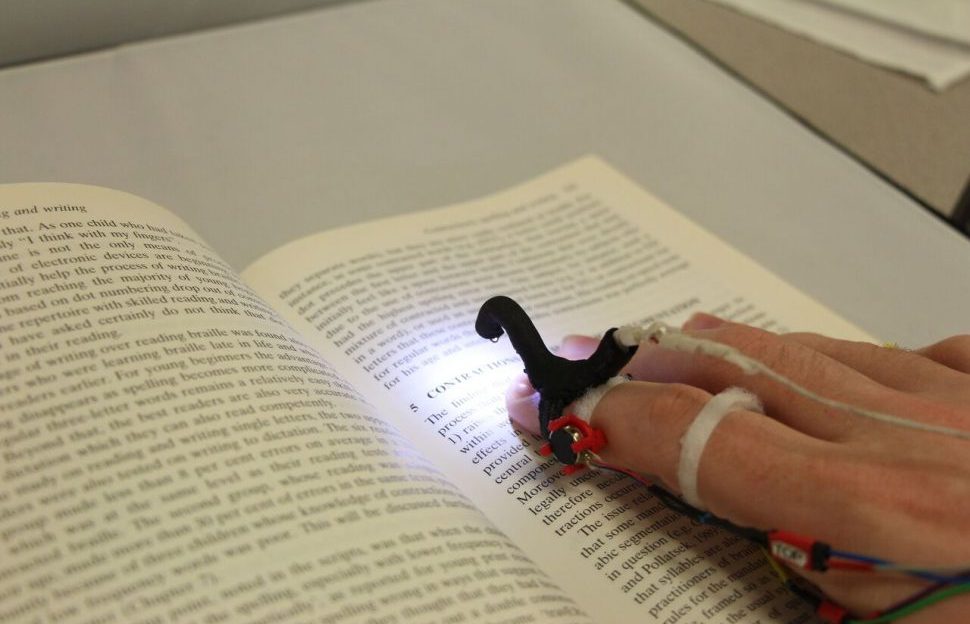 Technology can make it possible for many with visual impairments to regain aspects of their sight. But for those who do not have full use of their vision, a group from the University of Maryland hopes its innovations will offer some improvement.

In an development that recalls Louis Braille?s 200-year-old system of reading for the blind, the Maryland team created what they call HandSight — a device that guides users as they move their hands along lines of text.

Lee Stearns, a PhD student with a background in computer science, is one of the project leads, and has worked on it for the past five years.

He said the group?s research has gone through a number of iterations, refining what they hope becomes a finished product.

?We wanted to come up with some sort of tangible computing,? Stearns says. ?Our initial idea was to make a glove for [the] blind or impaired to feel shapes or textures like a map.?

That has evolved into a much less intrusive device, one which they have tested extensively on more than 50 subjects.

?Our envisioned solution would make it as small and unobtrusive as possible,? Stearns says. ?Sensors and a ring. So not interfering with sense of touch. Ideally it would be wired to a smartwatch, which could provide power for processing. The glove tends to cover up the palm and pad of finger. We want to avoid messing with sense of touch.?

As the research progresses, the group sees more and more what they can do with their technology. It?s become more than just reading for those who can?t see. They want to provide a full contextual experience.

?The end goal would be to enable access that you can?t through touch — images, colors, things like that,? Stearns says. ?You have a newspaper, you could run your fingers across the text and get a sense of where it?s laid out, where there?s a picture, captions. You can do it with prices on menus.?

While there is still much work to be done, Stearns hopes some iteration of their work could end up available to the public. He said that through their testing, people have been very interested in having something similar to this for their own use.

?Of course, the ultimate goal would be to have a product,? he says. ?We?re more focused on the research. There are a lot of open questions. Hopefully our work will inspire people to provide a new product. Who knows? When I graduate, it could be me. This could fit in line with that.?

It has certainly been a collaborative effort, with help from computer science, engineering and health care backgrounds. They partnered with the Atlanta Veterans Affairs Medical Center to help find potential patients for testing.

For Stearns, his work on the project has been a long journey stretching back to his undergraduate days. He was part of the Gemstone program at Maryland, which is a four-year research project that evaluates different product proposals.

?I?m a fan of the university and a fan of the people,? he says. ?As an undergrad, I did some research then and established connections. That?s what helped me stay here.?

His work could help lead to a bright future, even for the visually impaired.