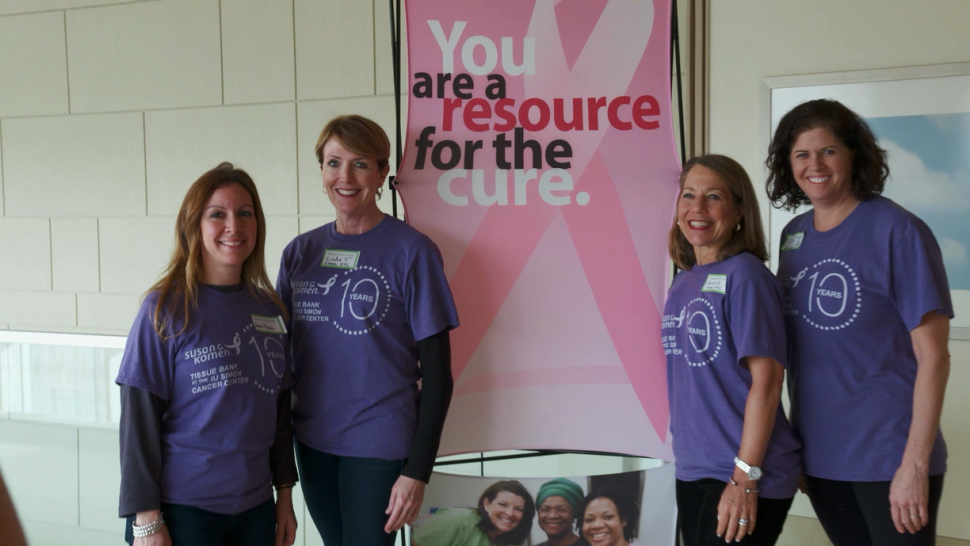 There's a very special place in Indiana where women, from nearly every race and age group, are giving a very special gift to every other woman on earth. This gift is for their mothers, sisters, aunts, nieces, daughters, granddaughters and for the billions of women they will never meet.

The place is the Susan G. Komen Tissue Bank at the Indiana University Simon Cancer Center. The gift these women are volunteering is a sample of their non-cancerous breast tissue which just may help unlock the cure for breast cancer.

"As you are following the women that donate through the process," says Connie Rufenbarger, consumer representative at the Komen Tissue Bank, "there is more hugging and loving than I have ever seen anywhere else in the world. These women are empowered by the ability to make a difference."

The tissue bank, which was the brainchild of Rufenbarger and Dr. Anna Maria Storniolo, began collecting samples in 2005. Before that doctors lacked a reliable source for healthy breast tissue to use as a control in their research. Largely, they depended on tissue donated by women undergoing breast reduction surgery or from tissue that surrounded malignant breast tumors. In both cases, the samples used were far from the normal tissue that was needed to further breast cancer science.

Around 2004, Rufenbarger, who has survived breast cancer twice herself, approached Storniolo about creating a repository for healthy breast tissue at IU. Both saw the imminent need, but were skeptical if they could get women to volunteer to undergo a biopsy. Storniolo, remembering the advice of friend, figured that they would never know unless they asked.

"I was a soccer mom," said Storniolo. "So, on a Saturday my son was playing, and I asked about 20 to 25 women at the game if they would be willing to come into the cancer center and have a breast biopsy. And, I think nearly everyone said yes."

To date, the bank has collected tissue samples from over 4,900. The donors, who remain anonymous, have their medical history documented, blood samples taken and then a needle is used to take several samples of tissue from their breast. The whole process takes less than an hour.

Researchers from all over the world have made use of the Komen Tissue Bank's samples. The broad swath of demographics represented in the bank has allowed doctors to look at how the breast develops and changes over time and tissue differs among groups.

The hope is that the findings derived from studies which make use of the bank's samples will allow doctors to catch breast cancer at stages earlier than can be detected through traditional mammograms. Studies are also examining possible risk factors and changes in the breast tissue that could be a precursor to cancer.

"We have a cadre of women who, after donating, developed breast cancer within a few years," explains Storniolo. "We're now looking at their normal tissue and comparing it to other normal tissue from the rest of the bank. What we're seeing is that their normal tissue, which became cancerous within two to three years, is very different. We are beginning to see the earliest changes of cancer before it even manifests itself as cancer."

Rufenbarger is quick to mention three important components of the fight against breast cancer, talent, technology and tissue, which have coalesced at IU. But there is a fourth, less tangible component, that never ceases to amaze her.

"It's IU and it's the women who have donated and the women who volunteer. To walk in here on a Saturday knowing absolutely nothing about what's going to happen, other than the fact that you're going to have a biopsy, doesn't seem like a big deal to these women and that just blows my mind."