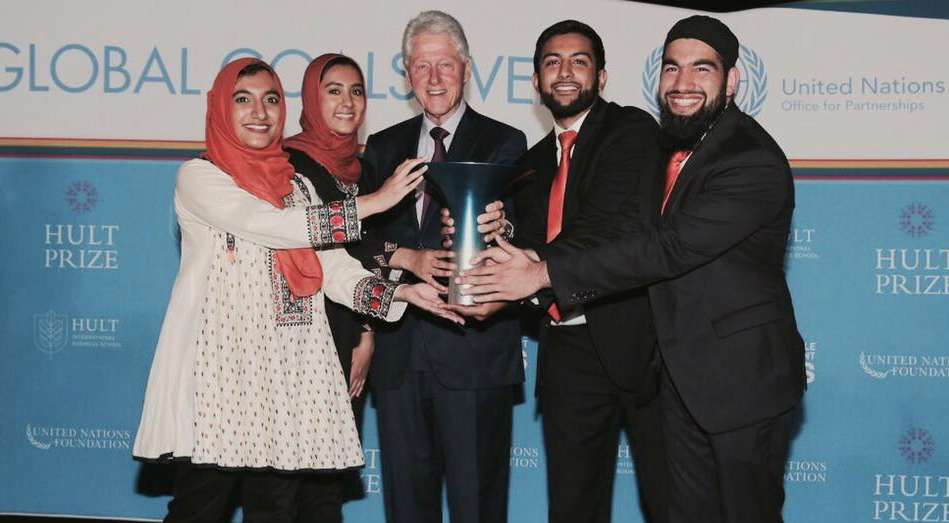 Using a combination of modern thinking and old-school technology, a group of current and former Rutgers Business School students created a business to help people in South Asia commute more effectively and improve their lives.

The company delivers an affordable and reliable public transportation infrastructure throughout Orangi Town, Pakistan, by providing rickshaws and an electronic payment system, similar to modern transit systems across the world. Along with a way to get from place-to-place, Roshni Rides gives a steady source of income for the millions of refugees living in that part of the world.

Roshni Rides was created in 2016, as a response to the Hult Prize Foundation's annual challenge. The foundation asks teams from around the country to solve a social issue; the most recent prompt was to develop a business capable of restoring dignity for a million refugees by 2022.

Rutgers student Gia Farooqi-the company's CEO-along with recent alums Hasan Usmani (COO), Moneeb Mian (CFO) and Hanaa Lakhani (CMO), decided that transportation would be the best method for accomplishing that task and solving another major issue at the same time.

"We tried to identify some of the main problems that refugees faced," Usmani said. "A recurring problem was transportation, and because the industry had the ability to enable so many people and have countless multiplier effects, we zoned in on it. Any vehicle is welcome to join the Roshni Rides network, but the reason we are targeting rickshaws is because we saw that there is a supply of these vehicles, and a demand not being met, so we wanted to optimize the existing infrastructure by getting multiple people to ride rickshaws."

The Roshni Rides business is modeled after public transportation systems around the globe, with maps, stations and payment cards. The ridesharing system partners with stores, schools and hospitals around Orangi Town, creating stops that customers can meet at. The vehicles go to those stops and provide rides for the people waiting there. Everything is paid for with a preloaded payment card, so there is no cash needed.

The idea was well received. On Sept. 16, Roshni Rides won the annual Hult Prize competition and was awarded $1 million in funding by former President Bill Clinton. Clinton himself had issued the challenge for restoring dignity to refugees, and was impressed at how Roshni Rides created a private solution to a large public problem.

The victory highlighted how far the company had come: in just 11 months, the Rutgers group developed a business and put its plan into action.

Like any company, the Roshni Rides team had to overcome some issues. But creating a business that involved social entrepreneurship was important for all four of the company's leaders because it gave them an opportunity to use the skills they learned in school to benefit the greater good of the world.

"There are many challenges associated with any operation, especially an international one," Usmani said. "I believe our biggest challenge was learning how to react to the market and our customers, and pivoting our idea accordingly."

"As a business student, I often questioned ethical choices that businesses had to make on a daily basis," added Lakhani. "After working for a year in the corporate space, I quickly realized that I wanted to find a position that was more fulfilling. Social entrepreneurship is important to me because it is the intersection of what I am passionate about: business and giving back."

The team believes Roshni Rides will continue to grow. All four founders will be moving to Pakistan to execute the business and see their plan roll out. And thanks to their Hult Prize winnings, they'll have the resources to make a major difference.

"Winning the million dollars meant we could create real impact and change for the people of Orangi Town," said Usmani.