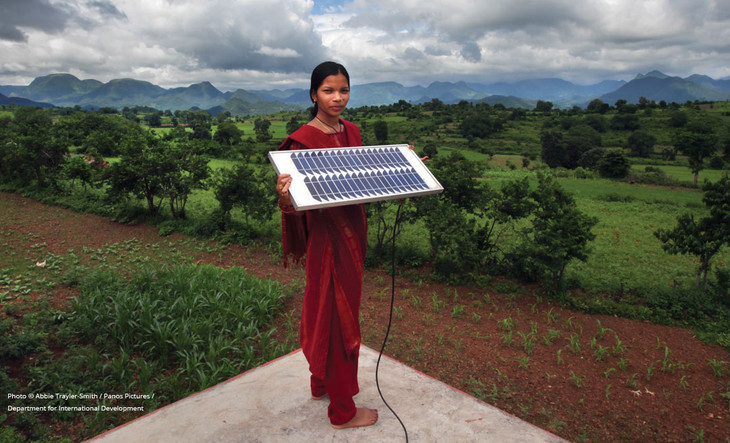 Solar cells are not easy to create, but they can do amazing things.

Akhlesh Lakhtakia is a world-renowned researcher in electromagnetic fields, and he knows all about their power. A Charles Godfrey Binder Professor in Engineering Science and Mechanics at Penn State, Lakhtakiahas has done extensive research and written several books on complex materials, including silicon semiconductors. Thanks to his knowledge in the field, Lakhtakia was able to see the potential of solar cells and figure out how they could help millions of people across the world.

Lakhtakia is working to create and distribute solar cells that would be used to power homes in under-developed countries, cities and neighborhoods, both locally and abroad. Since the cells use the heat of the sun to produce energy, the costs are lower for those who cannot afford traditional electricity. The International Energy Agency reported that 1.2 billion people worldwide did not have access to electricity in 2016, roughly 16 percent of the global population.

The key for Lakhtakia and his colleagues was lowering the price of solar cell production, allowing them to be financially accessible for everyone. Because of the complex process involved in them being made, solar cells have a large manufacturing cost. Another significant investment is required to send the cells to the areas of the world that need them.

To make a traditional solar cell, scientists create layers of silicon so that the material acts as a semiconductor. Solar cells require a proper electron balance to work properly, meaning two layers of electrons must counter each other evenly. The top half of the cell has positive-type silicon, also known as p-type, which has a larger hole concentration than electron concentration. The bottom half is made from negative, or n-type, which has more electrons than hole concentration. When placed together, the two types balance each other out, allowing the solar cell to produce energy when light is shined on it.

?What happens is, when light conforms, that means there is absorption of optical energy,? Lakhtakia said. He explained that the layering of semiconductors capture and ingest solar radiation, and the solar cells then turn that into energy.

To combat the price problem, Lakhtakia and his team worked to make the solar cells more efficient. He discovered a solar cell structure that only requires a single semiconductor, called a Schottky-barrier solar cell. When they looked closely at the Schottky cell, they also determined they could use other materials besides silicon to lower costs. They decided upon indium gallium nitride, a versatile material that can expand in thickness. Added to the newly-designed solar cell was a metallic reflector on the back, which increased photon absorption. That allowed the solar cells to produce energy for a longer period of time at a lower cost than previous models.

?We looked at many different materials and methods and determined that this method would allow us to have maximum efficiency at the most affordable cost,? Lakhtakia said. ?By changing the way we created solar cells, our efficiency jumped to 17 percent, which is enough to provide everyday power use.?

?Giving every home a chance to access power allows students to have the lights on longer to study, refrigerators can keep food fresh for longer periods of time, all sorts of advantages that are made possible because of these renewable energy cells.?

Lakhtakia is confident that the solar cells can make a tremendous impact for people in need. And now with their lower cost, he?s hopeful more people can access solar cells than ever before.