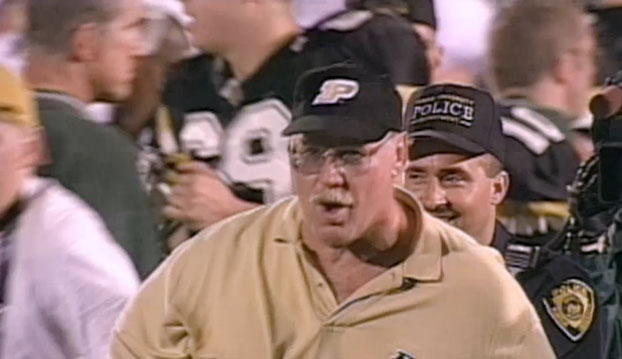 The Big Ten lost one of its most innovative, influential and beloved coaches with the passing of Purdue?s Joe Tiller, who was 74.

Tiller forever changed the face of Big Ten football upon being hired at Purdue in 1997, showing a wide-open offense could be a success in the black-and-blue Big Ten. And in doing so, Tiller reversed the fortunes of Purdue during a 12-year run that included 10 bowl trips and the school?s first Rose Bowl since the 1966 season.

Tiller left West Lafayette as the school?s all-time winningest coach, passing Jack Mollenkopf by going 87-62 overall and 53-43 in the Big Ten from 1997-2008. While Tiller?s prowess as a coach was formidable, he was an even better person who I enjoyed getting to know over the years.

I?ll never forget first sitting in his office in the winter of 1998. I was in West Lafayette to do a story on his magical 9-3 debut in 1997. I soon discovered: No one told stories like Tiller. He just had a knack. We all know people like that. So, I?m asking Tiller if recruiting is getting easier for him since he led the Boilermakers to a bowl win in his first season after the school hadn?t been to the postseason since 1984. He leans back in his chair ?

?In recruiting, most kids had a real phone number and a chump phone number,? Tiller said. ?We aren?t getting the chump line too often anymore.?

There was an ?Everyman? quality about Tiller whose personality was perfect for slow-paced West Lafayette and conservative Purdue. His house in West Lafayette was nice-but modest. No gated community or five-car garage. Nope. Tiller bought his milk and bread just down the street at Marsh supermarket, cut his lawn and just may even borrow your chainsaw. And Tiller went to church every day. He made it easy by living a short walk from Blessed Sacrament Catholic Church on Sacramento Drive in West Lafayette.

Tiller had a presence about his. He was a big man, a former offensive lineman at Montana State who filled a room. I first encountered Tiller when he was the Boilermakers? defensive coordinator-that?s right, defensive coordinator-while I was at Purdue from 1983-86. The guy was intimidating for a student assistant in the school?s sports information department who was looking for a quote for program feature stories I wrote on guys like Rod Woodson, Fred Strickland, Cris Dishman and Kevin Sumlin.

But as the years past, and he circled back into my life as Purdue?s head coach, Tiller softened-at least a little bit. But he still was intimidating. I recall being in his office on another occasion and watching him rip into a misbehaving player. It made me slump in the chair.

On my last visit with Tiller as Purdue coach prior to the 2008 season, he had something we wanted to show me. Tiller reached over to a shelf in his office and showed me the plans for his house in Wyoming. Man, was he proud. Tiller beamed as he unfurled the papers and showed me the layout. He had dreamed and yearned for this for years.

?Just me and the trout,? Tiller said. ?They don?t tell me what play I should have called on third-and-five.?

And then there were the calls. When you looked at your phone and saw it was Tiller, you knew it wasn?t going to be a short conversation. Tiller told stories of Purdue fans who would stop by his cabin and visit. ?You should see these people, Tom,? Tiller would say. ?They look at my Purdue memorabilia and almost cry.?

Tiller loved to talk-about pretty much anything-but especially his love of the West. Tiller fell in love with Big Sky county as a player at Montana State-and then as an assistant and later head coach of Wyoming. Now, he was living among the coyotes, wolves and bears. And, he loved it. Tiller was living his dream. How many of us can say that?

The last time I heard from Tiller was via a phone call about a year ago.

?Do you know how much snow we got out here last winter?? Tiller asked, waiting for me to say: ?How much??

I asked him about what he thought of Purdue?s chances in the coming the season. He didn?t seem too interested, relating he had lost desire to follow the team as his connections to the school faded. Understandable.

I could go on about Tiller?s football resume. Yes, it was impressive. The Big Ten never had seen an offense like the one Tiller brought with him from the plains of Wyoming to take over for Jim Colletto. Tiller introduced a wide-open offensive style to the button-upped Big Ten. Some analysts affectionately called Tiller?s spread attack ?basketball on grass.? And many of those same analysts doubted such an offense could be successful in the Big Ten. Boy, were they wrong.

But Brees, of course, was the prized pupil. Whenever you asked Tiller about the two-time Heisman finalist, he got a bit excited. Why not? Brees is a Big Ten icon who delivered Tiller to the Rose Bowl in the 2000 season.

Can you believe that? Purdue? In the Rose Bowl? Yep.

As Tiller liked to say about himself: ?Not bad for a guy from a dead-end street in Toledo.?

I am gonna miss Joe Tiller.