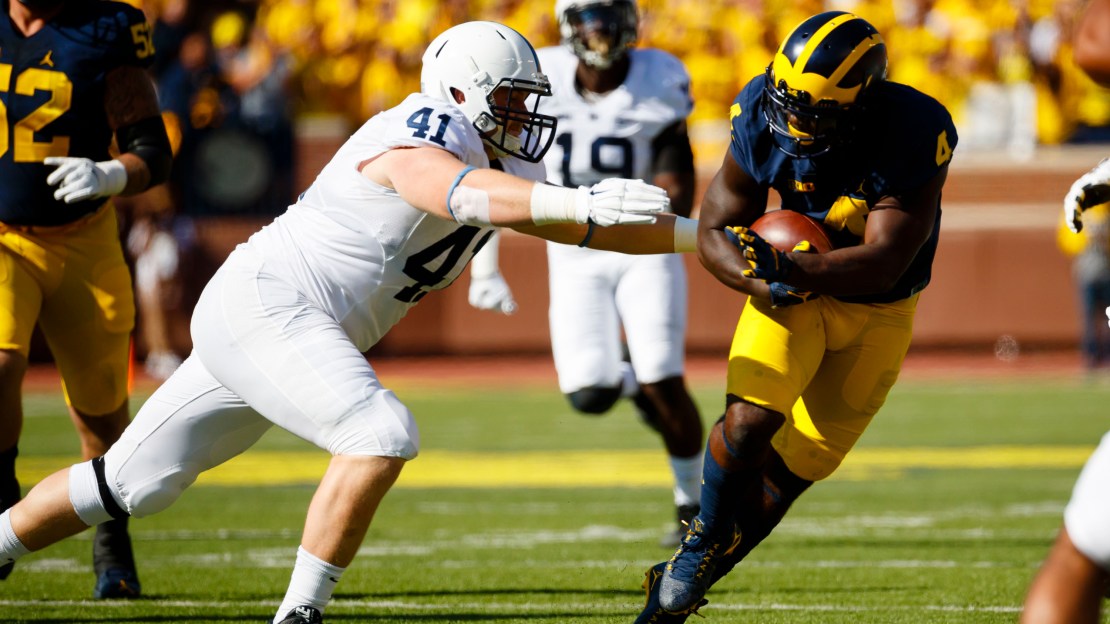 It's all about keeping the momentum going for Penn State, the defending Big Ten champs who have been impressive out of the gate in starting 3-0.

Up next: A trip to Iowa.

Nittany Lions senior defensive tackle Parker Cothren knows it will be a challenge to beat the Hawkeyes in Kinnick Stadium, where Penn State hasn't played since 2012. The Huntsville, Ala., native is ready. Since 2000, Penn State has lost four of five games in Iowa City, but it did win that 2012 game, 38-14.

Cothren was a key cog in Penn State's improbable run to the Big Ten title last year, starting 13 games and earning honorable mention All-Big Ten honors from the league coaches. He finished the year with 26 tackles along with two sacks and 5.5 tackles for loss. Cothren has five tackles this season, as he plays a key role as a disruptor on the interior of the Nittany Lion defensive line.

The standout play of the Penn State offense has overshadowed the work of a defense that is No. 1 in the Big Ten in scoring (4.7 ppg) and No. 5 in total defense (273.7 ypg).

I caught up with the 6-4, 304-pound Cothren as he prepped to take on 3-0 Iowa this Saturday in Kinnick Stadium.

Q: What have been some keys to the strong defensive start for Penn State?
A: We have been trying to play to our standards. We haven't really focused on who we were playing. We just have been wanting to play our style of football. That has what has allowed us to be successful in the first three games.

Q: Who are some key guys up front you play with?
A: We have some young, talented ends who have played well these first three games. They work hard and communicate well. They have done a good job tell us tackles what is going on with the formations since we can't always see what's going on. It helps us all stay coordinated.

Q: Who is the strongest defensive lineman?
A: I'd say it's between Kevin Givens and Curtis (Cotheran).

Q: Who is the fastest?
A: Shareef (Miller) and Torrance (Brown) for sure.

Q: Who is the toughest?
A: That would be me.

Q: When you go to the Penn State Creamery, what is your go-to flavor?
A: I go with chocolate chip cookie dough each time.

Q: Where is your go-to place to eat on campus?
A: There is a little taco shack I like to go to.

Q: What would you order for your last meal on earth?
A: A cheeseburger.

Q: What TV show are you obsessed with right now?
A: I watch "Game of Thrones" religiously. The storyline is cool. And there are so many characters we have gotten to know throughout the seasons.

Q: How does a kid from Alabama get to Penn State?
A: I came and visited and loved the school and loved the place. I could tell how well the players got along and liked each other. And seeing the atmosphere in the stadium was good.

Q: What do you think of the Iowa offensive line?
A: They look really good. We respect them. We want to be prepared. They have a good scheme and run it well.