Dienhart: Ohio State's passing game is in need of a fix 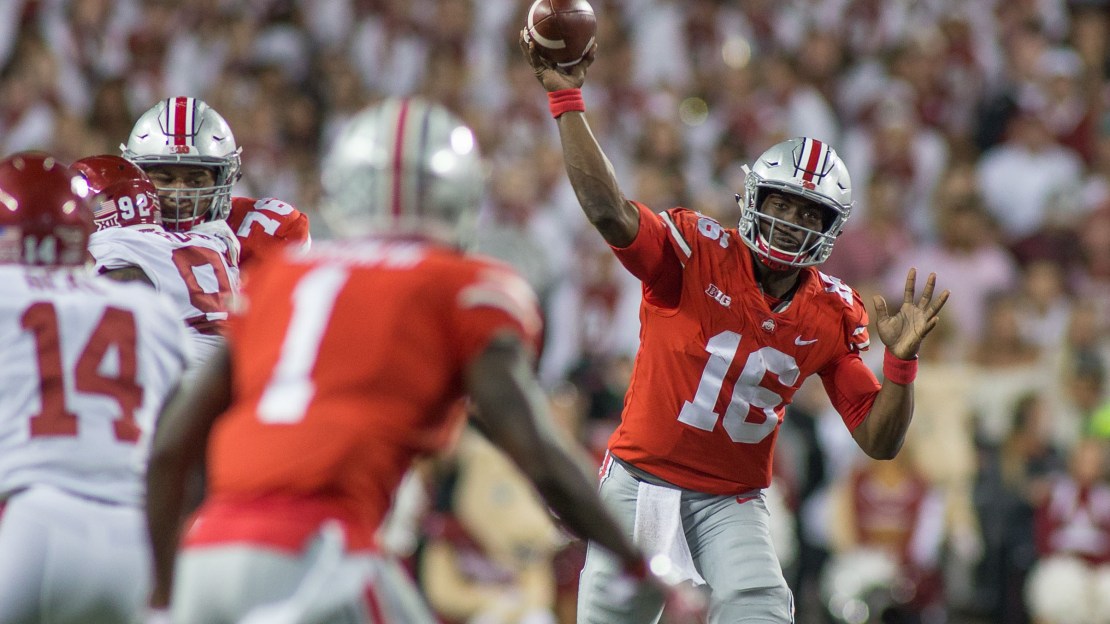 Look, we all know it: Ohio State's passing game is broken. My dog Zoe could tell you that. And she doesn't even like football. Just Frisbee.

How bad has it been? Buckeye quarterback J.T. Barrett has thrown for less than 200 yards in four of his last five games. Last week's 31-16 home loss to Oklahoma may have been a nadir, as Barrett went 19-of-35 for 183 yards with an interception.

Or, was the low point it the 31-0 loss to Clemson in the College Football Playoff last season, when Barrett went 19-of-33 for 127 yards with two picks?

Or, perhaps it was Barrett's effort vs. Michigan last year, when he connected on just 15-of-32 passes for 124 yards with a pick?

Or, maybe the Ohio State passing game hasn't bottomed out yet. Man, that's a scary thought for a proud program hailed by most as the Big Ten favorite in 2017.

Add it all up, and in Barrett's last five games, he is 83-of-157 (53 percent) for 824 yards with four touchdowns and four interceptions. The Buckeyes are 3-2 in that time, with the wins being in double OT vs. Michigan in 2016, last season vs. a Michigan State squad that would finish 3-9 and vs. Indiana this year.

Ask yourself this as you settle in to watch Ohio State on Saturday vs. Army: What is the offensive identity of this team? If you had a 15-second elevator ride with someone, how would you describe the Buckeye offense?

Against the Sooners, Barrett had three pass plays of longer than 15 yards. He has had trouble throwing the ball beyond 10 yards most of his career and Saturday's was no exception. Entering that game, Barrett's completion percentage on throws of 10-plus yards downfield was 44.8 percent against power conference opponents. He was 5-of-15 against the Sooners. No wonder Ohio State has scored 20 points or fewer in regulation in four of the last five games (Oklahoma, Clemson, Michigan, and Michigan State).

As you would suspect, Barrett has been a target of fan unrest. How crazy has it gotten? Some Columbus denizens want a change under center, calling for Joe Burrow or Dwayne Haskins. Safe to say, that won't happen. And, it shouldn't.

"He's an old veteran," Meyer said this week of his senior signal-caller who has a 27-5 career record. "He's been through it. I'm the first one to say from Day One you get far too much credit and too much blame. The best way to answer issues is to play really well and make sure those around you play really well."

The good news for Meyer and Company: The next three games should offer ample opportunity to work on the aerial assault. First up, a visit from Army. That's followed by a home game vs. UNLV and then a trip to Rutgers.

But, honestly, how much will the Buckeyes have to pass to beat those three teams? Probably not much. Ohio State offensive coordinator Kevin Wilson may not get past page 4 in his playbook. So, how much work will the listing Buckeye passing game get before Maryland comes to Columbus on Oct. 7? When will this attack come to life? At Nebraska on Oct. 14? Vs. Penn State on Oct. 28? At Iowa on Nov. 4? At Michigan on Nov. 25?

Remember Meyer's disgust following the Clemson loss in the College Football Playoff last season? Remember that? The Buckeyes were blanked for the first time since 1993, and Meyer was held scoreless for the first time in 194 games as a head coach.

In the postgame, Meyer stated: "I'm not used to it. We're not used it. It's not going to happen again."

This, despite Meyer bidding adieu to co-coordinators Ed Warinner and Tim Beck and bringing in Wilson to fix the offense after he parted ways with Indiana. Meyer didn't stop there, tabbing wunderkind Ryan Day, a protégé of Chip Kelly, as co-offensive coordinator and quarterbacks coach.

Now, two games into the 2017 season, and things are looking very familiar along the banks of the Olentangy River. What gives with the offense?

"It's a work in progress," Meyer said on his radio show this week. "It's a new offensive coordinator and a new quarterback coach that we're trying to mesh the good things that Indiana did and the good things that Ryan Day did when he was with Chip Kelly and continue to enhance our offense."

Before addressing the pass game, the Buckeyes need to consider this: Run the tailbacks more often. Ohio State has two good ones in true freshman J.K. Dobbins and Mike Weber. But the staff seems to neglect using them. That was especially the case in last week's loss to Oklahoma. Dobbins and Weber combined for 16 carries for 101 yards with a TD. That comes out to 6.3 yards per carry. Not bad. Barrett ran 18 times for 66 yards, 3.7 yards per tote.

Look, Weber was the 2016 Big Ten Freshman of the Year, running for 1,096 yards and nine touchdowns. And Dobbins looks like one of the nation's top true freshmen, running 42 times for 253 yards (6.0 ypc) with a TD as Weber has dealt with injury (hamstring) so far this year. Let these guys carry the bulk of the rushing load.

There is no time for radical change on offense. The season is rolling and gaining steam. It's important to remember that all is not lost for the Buckeyes. A 12-1 Ohio State team that won the Big Ten title would likely control its destiny for a spot in the College Football Playoff. But the Buckeyes don't have any margin for error.

Perhaps this note will perk up fans along High Street: Five of the last six national champions all had a home loss, including Ohio State in 2014 in Week 2 to an unranked Virginia Tech team.

Still, Wilson and the offensive staff have to find a way to make this pass game work. Barrett has struggled working against zone defenses. Is Barrett patient enough in the pocket? Does he have the swagger and confidence to make tight throws?

There is talent on this roster. Yes, the tight end spot is not a strong area. But wideouts like Parris Campbell, Johnnie Dixon, Terry McLaurin, K.J. Hill and Austin Mack all arrived in Columbus with fat scrapbooks.

As is the case with most every problem in life, it's not just one thing that is the cause of the issue. Barrett can do better. But, so can the wideouts ? and coaches.

Ohio State wants to get back to the summit. The uber-talented Buckeyes can beat most teams on their schedule with a basic game plan drawn up by a Pop Warner coach. But Ohio State ultimately will be judged by how they do against the heavyweights on their schedule.

Big wins and gaudy offensive numbers against Army, UNL, Rutgers, Illinois and the like won't be impressive. Let's see how the Buckeye offense looks vs. Penn State ? at Iowa ? at Michigan.