Simmie Cobbs Q&A: 'It was good to get Coach Allen his first win' 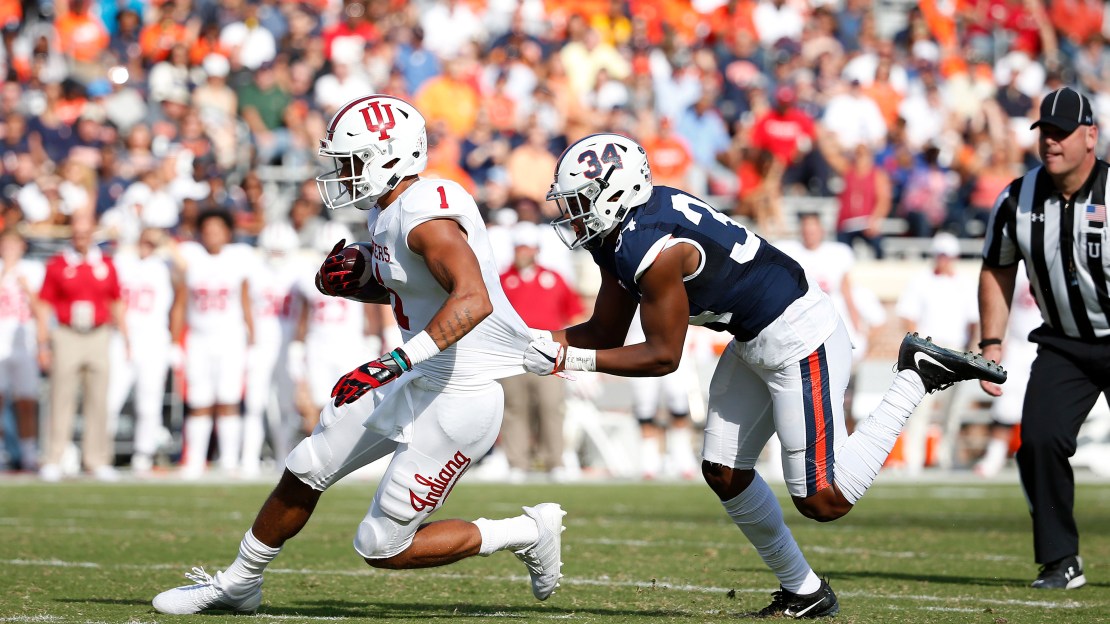 Hoosier wideout Simmie Cobbs dashed down the left sideline in the season opener vs. Ohio State. He turned to snag a Richard Lagow offering. But the pass appeared to be sailing out of bounds. That is when Cobbs extended his right hand and made a stunning one-handed catch.

It was just more proof of the rising stature of the 6-4, 220-pound junior. Cobbs began turning heads as a sophomore in 2015, when he made 60 catches for 1,035 yards with four TDs. But the Oak Park, Illinois, product saw his junior season end in the first game because of injury. Cobbs received a medical redshirt and is now back, apparently better than ever and primed for a big 2017 as the Hoosiers look for a third bowl in a row and the school's first bowl win since 1991.

In two games this season, Cobbs has 16 receptions for 211 yards and two TDs for 1-1 Indiana. Cobbs won't be able to add to his numbers this Saturday, as the Hoosiers' game was called off because of the impact Hurricane Irma had on scheduled opponent Florida International. IU moved quickly to find a new foe, scheduling Charleston Southern for a home game on Oct. 7.

I caught up with Cobbs this week as he looked to fine-tune his game and get ready for Indiana's next game, a visit from Georgia Southern on Sept. 23.

Q: What will you do with your down time this weekend?
A: We are staying focused. I am resting, too, and trying to get my body right.

Q: How big was the win at Virginia last week?
A: It was huge. We emphasize a lot that we won't let the Ohio State game get us off course. We knew we had a job to do. Road games are tough and we had to compete. It was good to get Coach Allen his first win. We want to build off that and go on to big things.

Q: What's the biggest catch you've made in your career? Is it the one you made vs. Ohio State in the opener?
A: Not really sure. I think every catch is big. It can be a first down and energy boost for a team. Or it could be a third-down conversion that leads to points. So, I think every catch is a big catch.

Q: How many balls do you catch a day?
A: Since I am not on special teams, every time special teams work in practice, I am always with the quarterbacks catching balls. They do certain drills, and I am the target. I probably catch over 100 balls each day.

Q: Who is the fastest receiver?
A: I always like to think I am. But, it's not true. It's probably between J-Shun Harris and Luke Timian. Taysir Mack is fast, too. We have some fast guys.

Q: Who is the best blocking wideout?
A: We are always working on that. Me and D Hale (Donovan Hale) do most of the blocking. It's probably between me and him.

Q: Who has the best hands on the team?
A: I hate to be biased, but I think I do. But we all have great hands. I'm sure if you asked any other wideout, he'd say he had the best hands. That's the confidence we all have.

Q: If you could take one teammate to a back-alley brawl with you, who would it be?
A: Definitely Tegray Scales. He used to be a state champion wrestler. And he's kinda loco in the head.

Q: Who wins a slam dunk contest on the team?
A: No doubt, Donovan Hale. You can go on YouTube and watch some of his dunks. He can do windmills and 360s.

Q: Who wins a 100-yard dash on the team?
A: That's a hard one. We have a bunch of track guys on the team. I like Rashard Fant. Raheem Layne, the freshman corner, is fast, too.

Q: What is your pregame music?
A: I like to go back to an old-school song from Jadakiss and it's called "We gonna make it." It takes me back to memories of my father and it gets me going and helps me focus.

Q: If someone wrote a song about your life, what would the title be?
A: That's a good one. Hmmmm. How about "Grit"?

Q: If you are stuck on a desert island, what DVD do you want with you?
A: Maybe "Olympus Has Fallen."

Q: What's your go-to place to go out to eat on campus?
A: I like to go to BuffaLouie's. It's a little spot right off Kirkwood. I like to get a double cheeseburger with bacon with their special honey barbecue sauce poured all over it. It's my favorite.

Q: Where do you get pizza?
A: Mother Bear's. They have this thing called "Munchie Madness" where you can get a medium pizza, cheesy bread, brownie and a two-liter for 17 bucks.