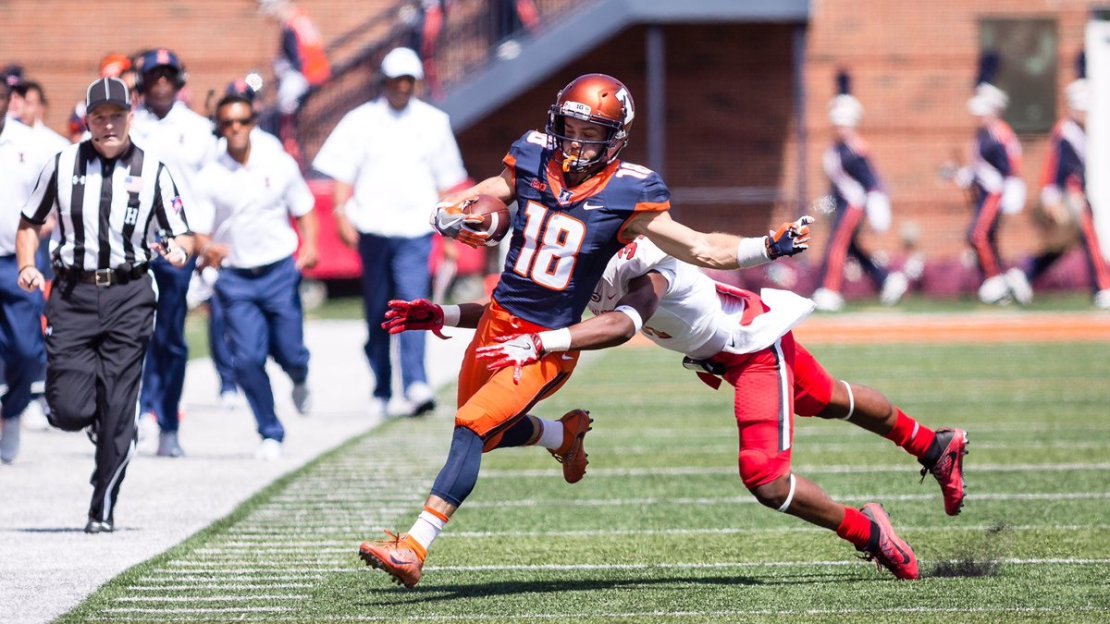 The BTN Bus Tour wrapped up a couple weeks ago, but we're still rolling out content from the cross-conference trek in podcast form.

I tried to chat with a player at each stop on the 14-school tour for BTN's Take Ten Podcast, and for the most part, it worked out. We were able to put together four fantastic episodes from the Tour, which can be found below.

Or listen on iTunes.

We're releasing our final episode from the Tour on Friday, which includes interviews from two of the final three stops–Purdue and Northwestern. Illinois was sandwiched in between those stops, but audio issues during my sit-down with wide receiver Mikey Dudek forced my decision to not include the interview in the episode. Winds were howling at the Illini football training camp site at the edge of campus, and there wasn't really anywhere to duck away with Mikey to conduct a pleasant-sounding interview. But he gave some really enlightening answers, and the two-time victim of ACL tears obviously had some interesting things to say about his journey back to the field after missing the last two seasons.

Dudek caught a 16-yard touchdown on his first target last Saturday vs. Ball State, and his 52-yard punt return in the fourth quarter helped set up Illinois' game-winning score.

The August 22 interview is transcribed below, and is shortened a bit for length.

BTN.com: How does it feel to be back out here with the guys?

Mikey Dudek: It feels great. Sitting out the last two years was hard on me, not only physically, but mentally as well. So, you know, just coming out here every day, I don't take it lightly. I give it all I've got on every single rep. And it's fun working back into things.

BTN.com: You had a birthday yesterday, right? 22?

BTN.com: I've got to ask how you celebrated, because I feel like with the eclipse going on, it might have overshadowed you a little bit.

MD: We went out and saw the eclipse yesterday as a team. I thought it was super-cool. And then Coach Smith let us out early yesterday, so I went out to dinner with the guys on the team and went to bed.

BTN.com: You could say the eclipse eclipsed your birthday then. It swooped in and stole your limelight.

MD: (Laughs). Yeah, it did, unfortunately, but it was cool.

BTN.com: What went through your head in those first 24-48 hours after your second ACL tear, knowing you had to do that recovery process all over again?

MD: There was a lot of thoughts. I even questioned if I wanted to play football still. When Doc told me that it happened, I thought I was in a dream. I wanted to just wake up there, and it would be gone. But I dealt with it, I attacked it head on. I was able to deal with that adversity I was given. I'm thankful for it, because it made me a stronger man in the end, on and off the field. So at first, when I heard the news I didn't think anything positive would ever come out of it. But after going through back-to-back (rehabs), I've seen the positives that can come out of it.

BTN.com: Can you elaborate? Give me a couple of examples of how the injuries shaped you as a person.

MD: One thing I think in particular is, I used to stress out a lot about little things in life. For instance, not that this happens often, but if I got a bad grade on an exam or something, I'd think the world is coming to an end and just think negative. But now after going through this and seeing how much worse things can be, it's definitely let me sweep the little things under the rug.

On the rehab process

BTN.com: Your position, wide receiver, just requires so much burst. Especially you, being smaller at 5-foot-10, 5-foot-11. Do you feel like that burst has come back, or that it ever really left?

MD: I'm faster than I was before.

MD: Yeah, quicker, faster. It's crazy to think that coming in, I was always a quick, little fast receiver growing up. When I got hurt, I never thought I'd be able to regain that ability. But working with our strength staff, our training staff, they helped me surpass what I was.

BTN.com: Speaking of that, I noticed you came out of this recovery process-I know some pictures were taken during one of your team lifting events-looking jacked. You looked like The Rock out there. Dude, what's the secret, what's been going on? What are they feeding you?

MD: (Laughs) Nah, I mean, the secret is upper body for two straight years, unfortunately. I wouldn't have wanted it to be that way, but given that I did have a lower body injury two years in a row, it definitely had me lifting a lot. A lot of upper body.

Do you even lift, bro? Shout out to College of Business junior Mikey Dudek & @IlliniFootball on another successful Lift for Life event ? pic.twitter.com/XClEpJstcj

BTN.com: Did you pick up any hobbies while you were injured? Did you binge-watch any TV shows? What did you do during all that downtime?

MD: During the downtime I played a lot of Xbox. My roommates and I, we play NHL, Call of Duty, Madden, all of those. And I think, you know, just getting my mind off football, getting my mind off my knee throughout that whole thing. Because if I consumed myself too much with it, it would just cause me to stress out. And I started reading a lot more, I was never really a big reader. I actually painted a couple of times. A couple of different hobbies I probably wouldn't have done if they injuries didn't happen.

Training Camp Compliments: Give one compliment to your rival (Northwestern)

MD: Umm, I don't know. I don't think I even have one for them. I like their purple jerseys, I think that's a nice color for them.

Song of the summer:

MD: I'd go to Papa Del's, I think that's a great pizza spot. Everyone loves that around here. Insomnia Cookies and Cookie Jar, they've got great cookies if you're looking for that. Fat Sandwich, they've got some good sandwiches. And there's a lot of chain restaurants too that are really good.

Egg Shells (One coach you walk on egg shells around, who you're intimidated by)

MD: Coach Ligs, (Bob Ligashesky, special teams) definitely. He's from Pittsburgh, he tells us that a lot. He's a real fiery guy, you definitely see his passion out here. You don't want to upset him, so you want to make sure you're always on your best behavior, you're always paying attention, doing all that when he's around.

Scrap That (One drill you could eliminate from practice)

MD: Probably just Indy (individual). When we're out here just running routes and stuff on air, I'd rather just get to it, 11-on-11, start playing football.

BTN.com: That's all I've got for you. Thanks, Mikey.