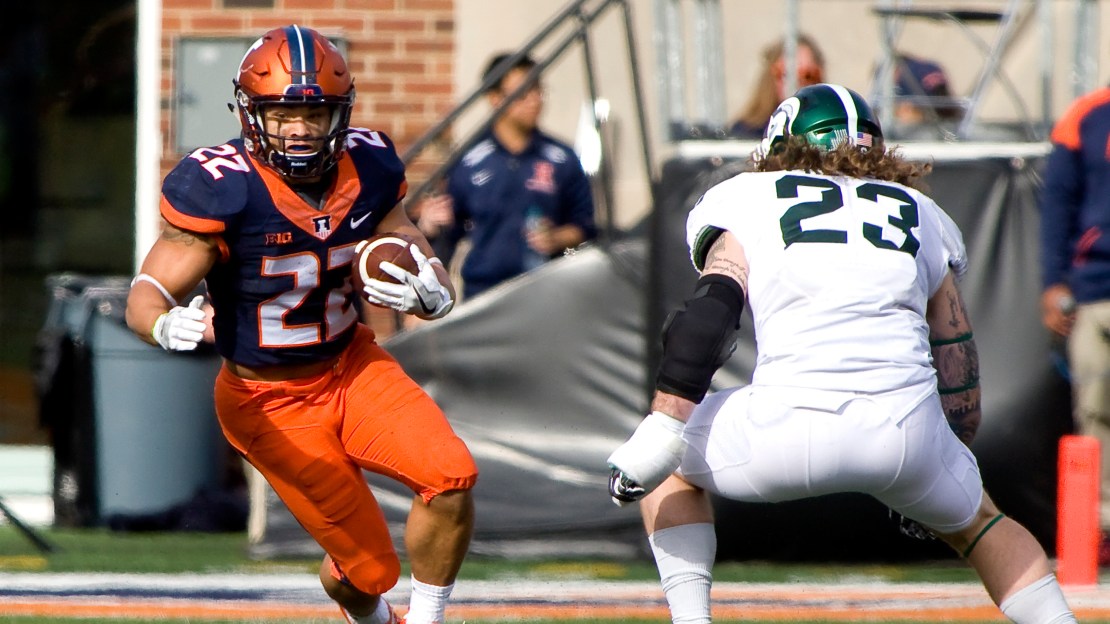 CHAMPAIGN, Ill. — Lovie Smith took Illinois through a brisk workout on Tuesday as he looks to build on a 3-9 debut. Many issues plague the Fighting Illini, who need better play in the trenches on both sides of the ball.

Here are some fun takes.

Most impressive player: LB Tre Watson. No. 33 in your program, the 6-2, 235-pound junior moves very well from sideline to sideline. And the guy likes to hit. He is one of the more underrated LBs in the Big Ten.

Top specimen: RB Kendrick Foster. He is a well-put-together back at 5-9, 200 pounds, showing speed, strength, explosion and six-pack abs.

We expect @IlliniFootball's @KFos_22 to find the endzone a lot this season, so we had him show us his TD dives (with the Snap ?, of course). pic.twitter.com/qH3VCi0vOp

Loudest coach: Offensive line coach Luke Butkus. This isn't even close. The bearded Butkus has no tolerance for poor play. Time and again, he was getting after his linemen with vim and vigor. Late in the day, he tossed one player out of practice.

Impressive newcomer: OT Larry Boyd. The true freshman from St. Louis is a load at 6-6, 320 pounds. He is a true road grader who has a good shot to start on an offensive line that needs to improve. The Illini need to run better, a Boyd is equipped to open holes.

The Illini are going to play a TON of true freshmen. Massive Larry Boyd one of several on the OL pic.twitter.com/6DOSL24Ebb

On the rise: WR Ricky Smalling. The true freshman looks primed to win a starting spot on a wideout unit that has some potential with Mikey Dudek and Malik Turner back.

Nagging question: Is Chayce Crouch the answer at QB? Crouch hasn't played since helping the Illini win at Rutgers on Oct. 15 after hurting a shoulder.

Under the radar: DE Bobby Roundtree. The 6-5, 245-pound true freshman could be a big impact player off the edge for a defensive line that needs playmakers. Roundtree was committed to Appalachian State but was a late flip to Illinois. Good thing for the Illini.

How young is this team? Of the 101 players on the roster, 76 are true freshmen, redshirt freshmen or sophomores. And there are just eight scholarship seniors. No team in the Big Ten can be as reliant on so many youngsters.

During camp, the staff has been treading lightly with WR Mikey Dudek, who has missed the last two seasons with knee injuries. He had a schedule day off today.

Illinois has been practicing on intramural fields in training camp. Why? Because Lovie Smith doesn't want to rip up the practice area adjacent to Memorial Stadium. Players have a short bus ride to the intramural fields.

In 2018, Illinois will break ground on a $72-million football complex that will be attached to the existing indoor facility. It will include locker rooms, meeting rooms, offices and a medical area, among other things.

Don't be shocked if 20 or so true freshmen get on the field. OT Larry Boyd and WR Ricky Smalling look good along with DE Bobby Roundtree. Alex Palczewski is another freshman o-lineman who could play. Keep an eye on WRs Carmoni Green and Kendall Smith along with DBs Nate Hobbs and Tony Adams. And I love DE Bobby Roundtree, a 6-5, 245-pound freak off the edge. He has been described as a "thicker Michael Buchanan." At RB, watch Ra'Von Bonner and Mike Epstein, who is running No. 2 behind Kendrick Foster.