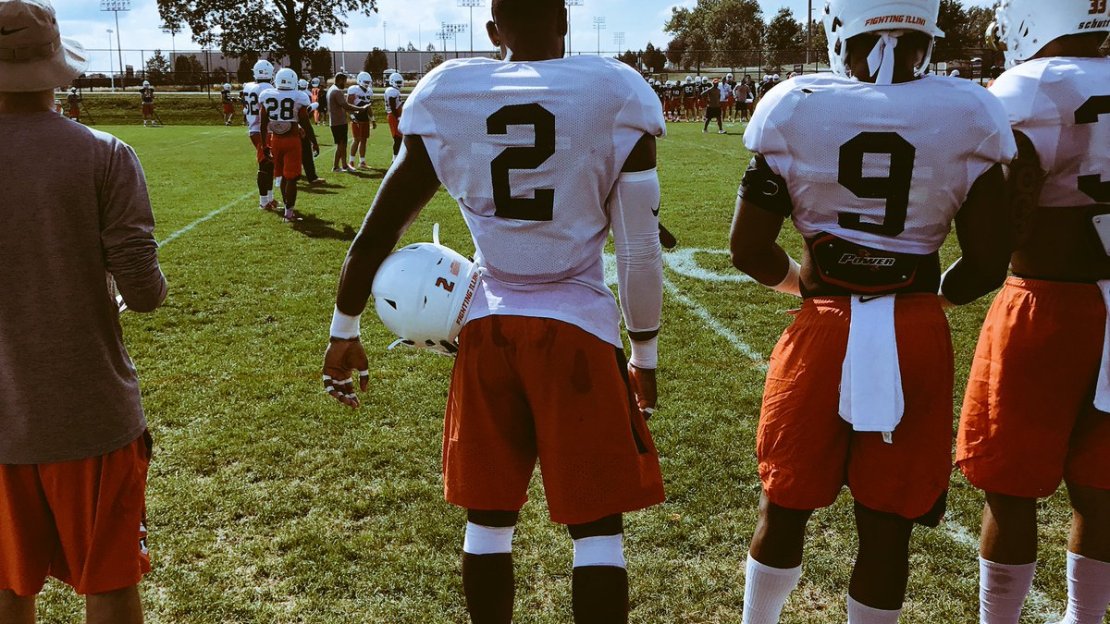 CHAMPAIGN, Ill. — Questions abound for Lovie Smith as he opens his second season in Champaign. Can he flip the script on a 3-9 debut? This looks to be a program that remains a work-in-progress.

Job No. 1: Building both lines. This also is a young squad, as 76 players on the 101-man roster are true freshmen, redshirt freshmen or sophomores. And there are just eight scholarship seniors on the roster.

Here are five things I learned at Illinois practice on Tuesday.

1. The quarterback spot needs to play well. The staff was hoping Dwayne Lawson would be on campus, but he never got out of junior college. So, Chayce Crouch is the guy. The junior showed some flashes last year. But he can have a reckless style that leaves him vulnerable to injury. He hurt a shoulder last year. He needs to become more consistent as a passer, especially in the vertical game. He had his moments on this day. Bottom line: This passing game must improve. Illinois was 13th in the Big Ten in both total offensive and passing efficiency during conference games. This will be a ball-control offense built on the run game and short passes. Crouch needs to be a high-percentage passer.

2. The linebackers look like the strong point of the team. Tre Watson is the man in the middle for a unit that lacks depth but is athletic. He is always around the ball and is a good tackler. JC transfer Del'Shawn Phillips is a great athlete who moves well on the edge. It was a blow when Jake Hansen got hurt recently; he may miss the season. He is an underrated talent who was on the rise. Julian Jones looks like the other LB. He was one of the more impressive specimens today. Dele' Harding provides some semblance of depth. He is one of the hardest hitters on the team and a good pass rusher. These guys have to help patch what has been a bad run defense for years.

Today's "whoa, who's that?" moment at @IlliniFootball practice came when I saw Julian Jones with a new number, 2. Dude looks the part at LB: pic.twitter.com/zMCypRB4Zq

3. I like the potential at wideout. No doubt, this is the best unit on offense. Now, can the QB deliver the ball? A big key will be keeping Mikey Dudek healthy. He has missed the last two seasons due to injury after a sensational 2014 freshman season. The staff is taking it easy with him in camp. He had a scheduled off day today. Malik Turner is one of the top playmakers in the Big Ten. And he showed some flashes today. He and Dudek could be a nice tandem. True freshman Ricky Smalling is one to watch. Carmoni Green and Kendall Smith are other true frosh WRs to watch. All three should play. Sam Mays could be a breakout guy. At 6-3, 200, he is a nice target. This team is in dire need of playmakers. Check this out: Illinois ranked No. 134 in the nation in offensive plays of over 20 yards in 2016.

Keep an eye on true freshman WR Ricky Smalling, who figures to play a big role this fall for @IlliniFootball. pic.twitter.com/7iAcomhouf

4. The offensive line has moving parts, but it could be OK. It better be. There is a lot to prove for a unit that lacks depth. The only sure things appear to be tackle Christian DiLauro and guard Nick Allegretti. They need to lead the way and get a push in the ground game to help RB Kendrick Foster. Gabe Megginson could be ready to fulfill the hype he brought to campus as a guard or tackle. Hard not to be impressed with massive true freshman OT Larry Boyd. The 6-6, 360-pound Boyd figures to start at guard or tackle. with DiLauro on the left side. Keep an eye on redshirt freshman Doug Kramer, who is primed to start at center. True freshman Alex Palczewski is a player those in Illini camp like.

The Illini are going to play a TON of true freshmen. Massive Larry Boyd one of several on the OL pic.twitter.com/6DOSL24Ebb

5. The secondary is hard to figure out. Injury has been an issue. The squad needs CB Jaylen Dunlap to be OK as he has been dealing with an injury and has not taken part in camp. He was dressed out today but didn't do a lot. He may be the top player on the team. Senior Ahmari Hayes is another key corner, but he was out today. Ditto true freshman Tony Adams, who may end up starting at corner. He is a top athlete that the staff likes. Nate Hobbs is a true freshman corner that the staff likes, but mono has been an issue for him. At safety, the Illini have Patrick Nelson at strong and true freshman Bennett Williams at free, where Stanley Green also is an option. Nelson is a veteran who can hit and run. Stay tuned. There is a lot still to figure out in the back end.

Biggest concern for me would be size – particularly on defense. Also incredibly young.