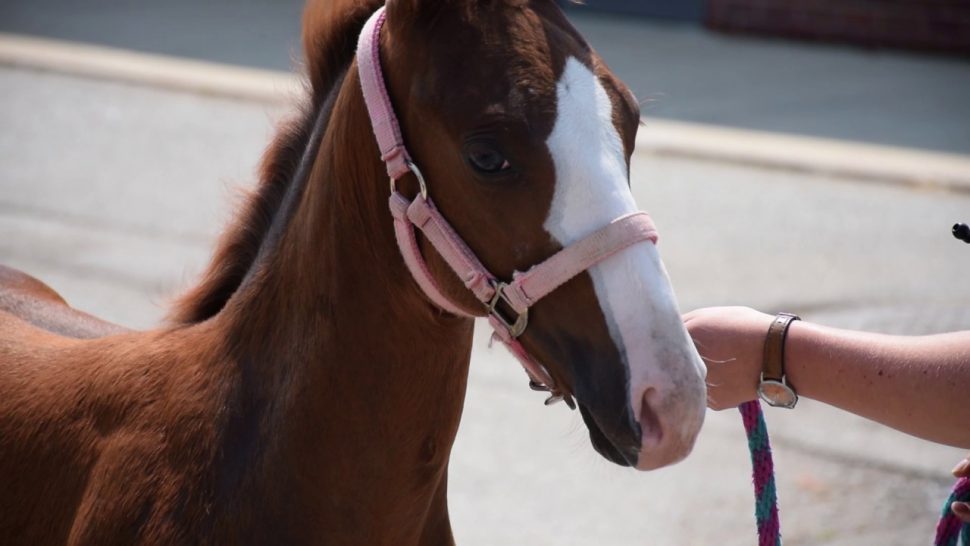 Looking to have your heart melted? Well, if this story doesn?t do it, you might be a lost cause.

Meet Chalee?s Dream Jet, aka Jet, a three-month old foal whose birth at the Purdue University Large Animal Hospital was cause for much celebration.

According to an article appearing on the Purdue News Service website, Purdue veterinarians had tended to a prior medical issue with Jet?s mother Josie, so owners Susan and Robert Gilliland were confident the hospital could ensure a healthy outcome.

?Josie has a history at Purdue,? said Susan Gilliland. ?She had an ovarian tumor removed at the hospital and we knew that if there were any complications with the birth, Purdue was the only place able to do a cesarean section.?

But soon after he was born, Jet started to exhibit trouble standing and walking. A hind leg malformation was causing the newborn colt to use his lower leg rather than his hoof for support.

Purdue vets quickly fit Jet with a pair of specialty shoes that helped correct the malformation and strengthen his lower leg ligaments. After a few months of physical therapy, Jet was trotting well enough to return home to the Gillilands. That was good news as, for them, he is much more than just a horse.

As his full name implies, Jet was the dream of Chalee, Susan and Robert?s daughter, who passed away at the age of 11 due to complications from cystic fibrosis. As part of her physical therapy, Chalee would barrel race atop her beloved Josie. She always wanted to see her horse welcome a foal into the world. And, even though he?ll not be racing like his mother, the Gillilands are sure he would have pleased Chalee to no end.

Today the Chalee Gilliland Foundation, which the Gillilands started as a lasting legacy to their little girl?s memory and her love for horses and racing, provides ?financial and emotional support? to people with cystic fibrosis, various animal-focused groups and the barrel racing community. For them, it is a natural extension of Chalee?s spirit.

?We founded the Chalee Gilliland Foundation after Chalee passed away to carry on her giving nature and to be able to help others with cystic fibrosis,? said Susan. ?We had met a dear friend who also had CF. He rode horses, too. He needed a lung transplant and had to come up with $30,000. We decided to put on a charity barrel race for him, and the foundation was born.?