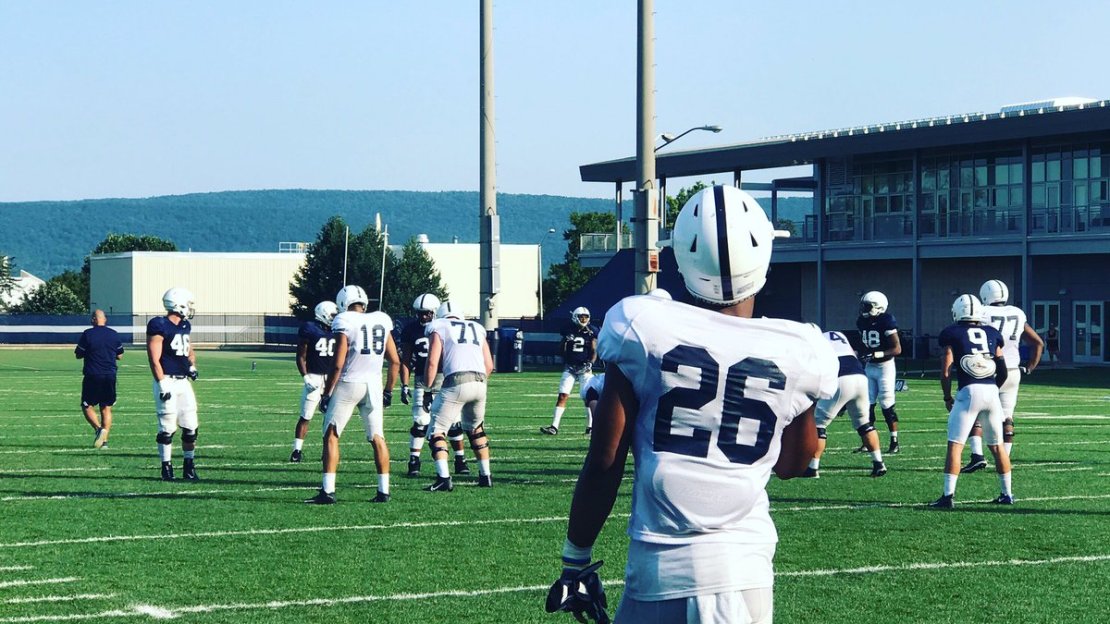 STATE COLLEGE, Pa. — Not long ago, Penn State was a program bereft of depth and talent. But look at the Nittany Lions now. They have emerged from NCAA sanctions to become the king of the Big Ten. Now, can James Franklin keep the momentum going in his fourth season?

Here is what I learned at the Penn State practice.

1. The offensive line looks good. For years, that wasn?t the case. Right tackle Andrew Nelson is a bellwether along with left tackle Brendan Mahon. Each is bit dinged right now but will be OK. The staff likes center Connor McGovern. And guard Ryan Bates is a future star. I also like youngsters Will Fries and Michal Menet. Matt Limegrover goes a good job coaching these guys up. This line has really physically developed compared to where it was a few years ago. And depth is MUCH better.

Huge part of PSU's improvement last yr, the outstanding job @CoachLimegrover did with the OL. pic.twitter.com/NdCibEYwKf

2. This offense could be every bit as good, if not better, than last year?s attack. There is no apparent weak spot. RB Saquon Barkley is bigger, faster and stronger than last year-if that is possible. Scary, huh? He looks every bit the part of a BMOC and is primed to make a run at the Heisman Trophy. The depth behind Barkley is silly. Miles Sanders could start for every other Big Ten team. QB Trace McSorley has a year of experience in Joe Moorhead?s offense. His confidence shows. Tommy Stevens could start for half the Big Ten but is a backup here. And there is no shortage of enticing targets led by TE Mike Gesicki. Yes, Chris Godwin is gone, but the wideout corps has lots of talent, including DeAndre Thompkins, Saeed Blacknall and DaeSean Hamilton. Juwan Johnson and Irvin Charles are big targets. Johnson is having a monster camp and could be primed for a breakout season.

BTN Bus Tour #PSU With the overall team speed, SB at TB, TM at QB and overall talent there is no ceiling here.

3. The d-line has to develop some pass rushers. Garrett Sickels and Evan Schwan are gone. I talked to coordinator Brent Pry after practice, and he likes his options off the edge. Torrence Brown has a nice first step, as does Shareef Miller. Those are the No. 1 ends right now. Ryan Buchholz and Shane Simmons also look good. Pry likes the potential of Buchholz. Keep an eye on redshirt freshmen Shane Simmons and Shaka Toney, who is undersized but quick. Perhaps true freshman Yetur Gross-Matos can crack the rotation. The staff likes him. He is quick. I think the pass rush will be just fine in State College, Pa. Inside, Curtis Cothran and Parker Cothern are anchors vs. the run. Sean Spencer does a good job with these guys.

4. The secondary will miss CB John Reid. Reid suffered a knee injury in the spring, and his return in 2017 seems unlikely, as he is on an internship with Intel in Oregon as I type this. That means Grant Haley and Christian Campbell are the starters. Campbell is long and quick. The third corner? It is Amani Oruwariye, according to Pry. The unit has a legit star in S Marcus Allen, who is built more like a linebacker. Troy Apke was running with Allen as the other safety on the first team. Tariq Castro-Fields is a true freshman corner the staff likes.

That's a lot of All-Americans, POYs, All-B1Gers, NFL players, and A LOT of letter winners for @PennStateFball over the years. ? pic.twitter.com/I79g99Q4Pd

5. I like the athletic ability of the linebackers. Koa Farmer is a former safety who has grown into the position. He is fast even though he has bulked up to 230 pounds. Manny Bowen and Jason Cabinda are back as anchors. Cabinda is stout in the middle. Cam Brown is another player who catches your eye on the outside. He has a good shot to start. Brandon Smith was running with the first team today. The former walk-on is so smart.