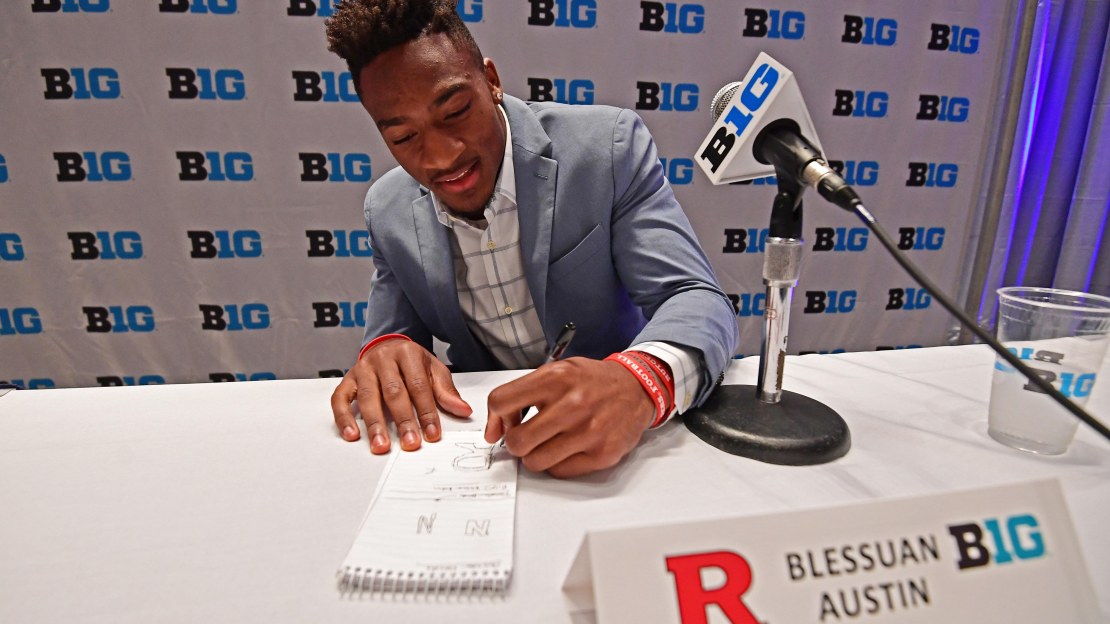 PISCATAWAY, N.J. — Chris Ash has his work cut out for him as he enters his second season coaching Rutgers. He is upgrading the roster, but the process takes time. The roster looks bigger. And there is no doubt more playmakers on offense, which is a good thing for Jerry Kill, the eighth OC in eight years for the Scarlet Knights. Today?s workout was a brisk affair on the school?s new palatial practice facility.

Here are five things I learned.

1. I wasn?t disappointed with the secondary. This is one of the most underrated units in the Big Ten. Corner Blessuan Austin is a rangy coverman. He teams with Isaiah Wharton to give RU a nice tandem at corner with a combined 45 career starts. Austin is arguably the best player on defense. These two can match up with most receivers in the Big Ten. I asked Austin after practice who was the toughest RU player to cover, and he said Jawuan Harris. ?He is shifty,? said Austin. Is this the best CB duo in the Big Ten? Maybe. Kiy Hester moves well in the back end as a safety. He was all over the field along with Saquan Hampton. This is a deep and experienced group that made some nice pass breakups today.

CB Blessuan Austin is part of what may be the most underrated secondary in the B1G for @RFootball. pic.twitter.com/iqLaXf4j0n

2. The staff is still sorting through the quarterbacks. Gotta like Louisville grad transfer Kyle Bolin. His experience shows on the practice field. He is poised and looks confident in the pocket. Bolin, who lost his job to Lamar Jackson at Louisville, also throws a good ball. Giovanni Rescigno also is very much in the hunt after taking charge of the position late last season and making five starts. And you can see why coaches like freshman Jonathan Lewis, who bears a striking resemblance to former Buckeye Cardale Jones.

3. The running backs look good. I really like Miami (Fla.) transfer Gus Edwards. The guy is a physical back who can move the pile. He may be the No. 1 guy. Trey Sneed and Robert Martin, dinged a bit, are veteran options. Sneed is a nice power/speed combo. It will be interesting to see how Jerry Kill deploys these guys. Josh Hicks also is still around. Lots of options. Oh, and there?s a fullback, a spot not see often in recent years in Piscataway.

Great to see Jerry Kill back in the game as Rutgers' OC pic.twitter.com/yT99vjFT8f

4. Janarion Grant is moving well after missing most of last year with an ankle injury. That is good, as RU needs his playmaking skills. Add Grant to Jawuan Harris and Damon Mitchell, and you can see why some feel the top three wideouts are pretty solid. And Ahmir Mitchell also is looking good as he comes back from a knee injury. He probably won?t be ready until the start of Big Ten season. Ahmir Mitchell and Grant wore green jerseys today. The Mitchell brothers are big targets. Also, expect the tight end to be used in the receiving game, which wasn?t the case last year.

There may not be a more valuable @RFootball player than Janarion Grant, who must stay healthy coming off injury. pic.twitter.com/Br5pCxIaM1

5. I like the o-line, which has three starters back. Left tackle Tariq Cole may be a future pro. He lines up next to veteran Dorian Miller, a strong blocker and a very smart player who is fun to talk to. Miller told me after practice he thinks this line is dialed in more so than it was last season. The other starter back is RT Kamaal Seymour, who this time last year was a defensive lineman. Jonah Jackson is the new center. And he may be an upgrade. Marcus Applefield is lined up as the right guard. A.J. Blazek does a good job coaching these guys.

BTN Bus Tour #Rutgers Depth on both sides of line is improved which you would expect in year 2 & both look like good off seasons in Wt. Room