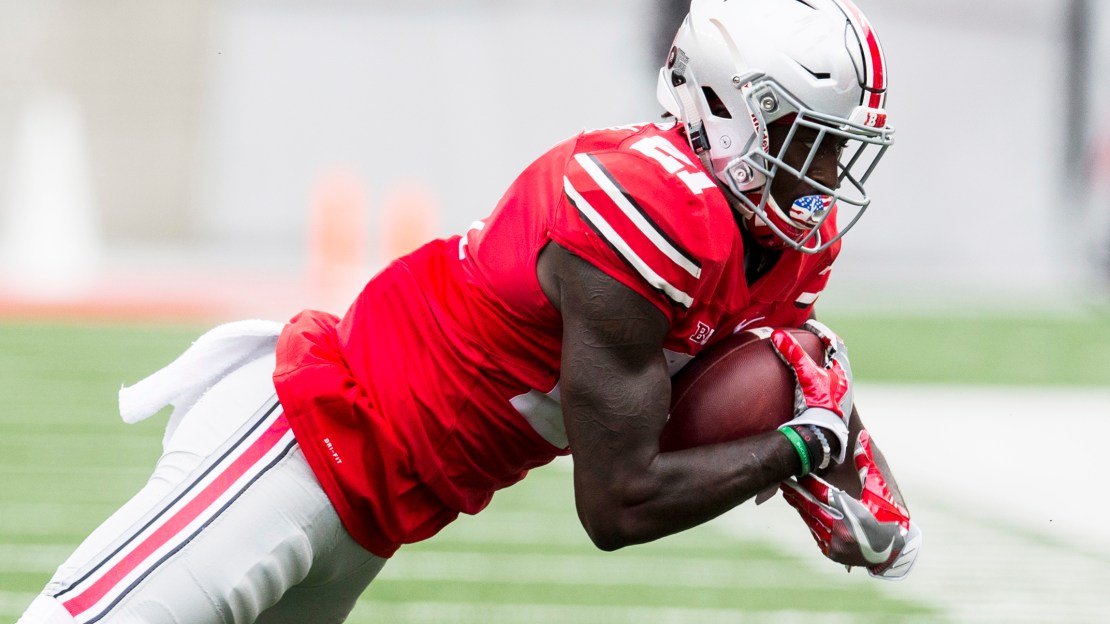 COLUMBUS, Ohio — This Ohio State squad is loaded with top talent across the board and is the pick of most to win the Big Ten and return to the College Football Playoff for a second year in a row. In fact, this may be the most talented team Urban Meyer has had since arriving in Columbus in 2012. Expectations are big.

1. There are some intriguing options at receiver. That?s a very good thing, considering the Buckeyes have lacked playmakers on the edge the last two seasons. A star has been lacking since the run to the 2014 national title. Binjimen Victor is an intriguing option because of his 6-4 frame. Parris Campbell, Terry McLaurin and Johnnie Dixon also turn your head when watching them go through drills. They need to get consistent separation from defenders. They often showed that burst today in practice. Dixon is a guy who has had knee issues in the past (he almost quit football at one point) but is enjoying a good camp and could be primed for a breakout. I also was impressed by true freshman Jaylen Harris, a 6-5 target.

2. The defensive line is as dominant as I thought. Nick Bosa, Tyquan Lewis, Jalyn Holmes and Sam Hubbard are beasts off the edge. I can?t imagine there are many more impressive foursomes at defensive end in the nation. Lewis is especially quick. Blocking these guys will be a nightmare for foes. Inside, Dre?Mont Jones and Robert Landers are classic big-body tackles who get a push. Anytime a defense is good up front, it has a chance to be good.

3. The options at corner are impressive. Damon Arnette, Kendall Sheffield and Denzel Ward offer a whole lot of promise. Arnette could be a star. True freshman Jeffrey Okudah lived up to the massive hype I had heard about him for months. Shaun Wade is another stud freshman who catches your eye. More often than not, these guys got the better of the wideouts on this day. Kerry Coombs is a great position coach. There may be some growing pains, but these DBs should round into form.

Leather-lunged CB boss Kerry Coombs coaches like his hair is on fire for @OhioStateFB. No Sanka for him. pic.twitter.com/g7wUeQEXOT

4. J.T. Barrett is looking primed for a big senior send-off. He always has been lauded for his leadership. And you can see glimpses of it during practice. But it?s his skills that always excites, as there are few dual-threats as deadly as Barrett. And he seems to be a nice fit for Kevin Wilson?s offense. In a few drills, Barrett showed great touch on passes down field. And it?s most vital that he limit his exposure in the run game and show patience as a passer. This offense needs more big-play ability in the aerial attack, as Barrett needs to let things develop and not such tuck and run. The attack will work at a quicker tempo this year.

5. The offensive line has something to prove. How good is this group? Not sure. The left side of tackle Jamarco Jones and guard Michael Jordan looks solid, as does center Billy Price. But the right side needs to be monitored. Who will be the right guard? Matthew Burrell ran with the first team today. Malcolm Pridgeon is in the mix. And right tackle Isaiah Prince needs to improve. Stay tuned.