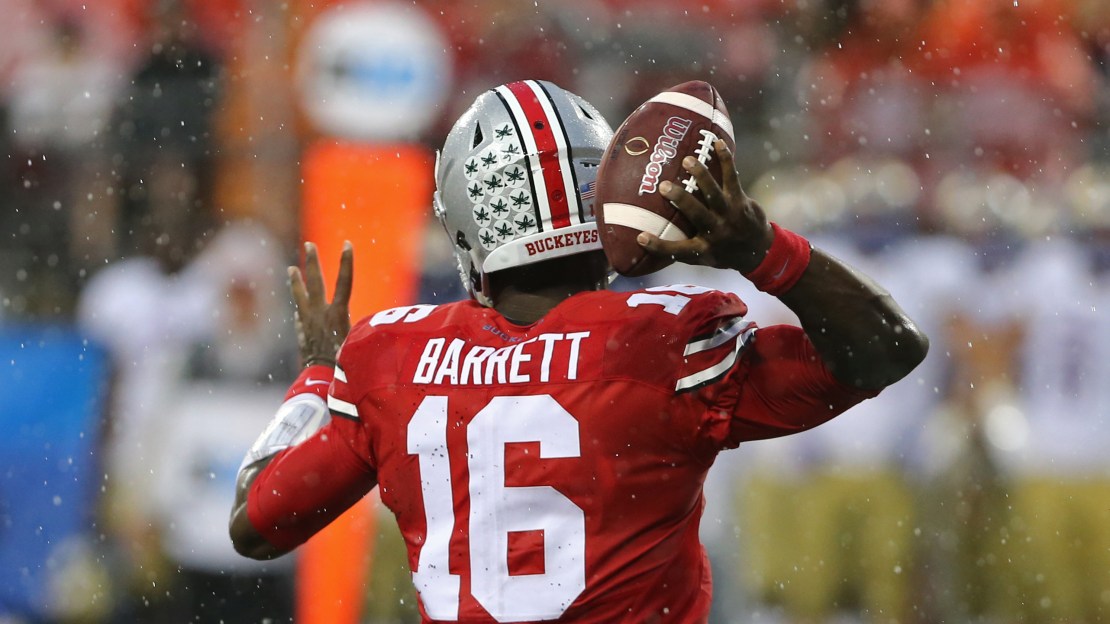 This time last year, who could have envisioned Penn State winning the Big Ten? And who envisioned Michigan State winning one conference game a season after claiming the league title and going to the playoff? The point: Each season is filled with unpredictability and fascinating storylines.

With Big Ten media days looming, here are 17 questions to ponder as we sit on the precipice of the season. Why 17? Because this is 2017.

1. Will Penn State repeat as Big Ten champs?
The Nittany Lions came out of nowhere to shock the world and win the Big Ten championship after starting 2-2 in James Franklin?s third season in State College. This was WAY ahead of schedule for a program with an uber-bright future. I like Penn State?s chances to repeat. The offense will be as good as last year?s explosive attack with QB Trace McSorley and RB Saquon Barkley working behind the school?s best line in years. And the defense will be stout. But there are two big hurdles: 1. Dealing with great expectations. 2. A game at Ohio State. Still, don?t discount the talent, resolve and focus of this program.

2. How will Nebraska?s new 3-4 defense perform?
Mike Riley knew his defense needed to improve. So, he shook up his staff by hiring former UConn coach Bob Diaco to coordinate the defense. He scrapped the Huskers? traditional 4-3 alignment and installed a 3-4, a trendy defense. The gist of switch: The 3-4 allows more flexibility along the front seven and the ability to morph and adapt stealthily. Plus, Nebraska has a plethora of good linebackers to make the scheme work. It better, as Year Three shapes up to be an important one for Riley and the Cornhuskers, who haven?t won a league title since 1999.

3. Can the Big Ten put multiple teams in the playoff?
In the three years of the College Football Playoff, no conference has had more than one team in the four-team format. But I like the chances of the Big Ten to get two teams in 2017. Obviously, the Big Ten champ would earn a bid. And I think that team will be Penn State. The other team? I like Wisconsin?s chances. The Badgers should win the West-again-and they may do so with just one loss as they enter the league title game. Yes, the Badgers are that good-and their schedule is that advantageous.

4. What impact will new Ohio State offensive coordinator Kevin Wilson have?
Ever since coordinator Tom Herman bolted for Houston after helping lead the Buckeyes to the 2014 national championship, the Ohio State offense hasn?t clicked at full steam. Urban Meyer made a bold move by bringing in former Indiana coach Kevin Wilson to run the attack, as former coordinators Ed Warinner (Minnesota offensive line coach) and Tim Beck (Texas offensive coordinator) left town. Wilson has the same offensive philosophy as Meyer, as he executed a power-spread offense at Indiana that often was among the best in the Big Ten. Don?t be shocked if Buckeye QB J.T. Barrett thrives under the stewardship of Wilson.

5. Will Michigan take a step back?
No Big Ten school lost as much as the Wolverines, who saw a national-high 11 players get drafted last April. Key personnel like WRs Amara Darboh and Jehu Chesson; TE Jake Butt; CB Jourdan Lewis; RB De?Veon Smith; DLs Taco Charlton, Chris Wormley and Ryan Glasgow; SS Jabrill Peppers are gone, not to mention three offensive line starters. Can Michigan compete not just for the East title, but its first Big Ten championship since 2004 with all of that key attrition? Alas, this may be too much for Jim Harbaugh to overcome in his third season in Ann Arbor. But never underestimate Harbaugh.

6. Will P.J. Fleck be an instant hit at Minnesota?
No new coach in the nation has as much buzz and mojo as Fleck, a walking pep rally who has an indomitable spirit and bottomless pit of energy. And ?Mr. Row the Boat? proved he can coach in four seasons at Western Michigan, which he took to the Cotton Bowl last season. Fueling expectations for Fleck in 2017: The Golden Gophers have plenty of talent to work with. Bottom line: Minnesota will be bowling again; and it could contend for the West if the quarterback spot develops. It?s gonna be fun to see what Fleck can do in a major conference.

7. Will Wisconsin win the West ? again?
Yep. In fact, don?t be shocked if the Badgers make a push to perhaps go unbeaten. Really. Look at the personnel coming back for understated and underrated Paul Chryst, who may be the smartest coach in the Big Ten. Yes, the defense is on its third coordinator in three years (hello, Jim Leonhard) and RB Corey Clement is gone. Still, Wisconsin has a loaded roster-and the schedule-to return to Indianapolis for the Big Ten title game. And, win or lose the league championship, the Badgers also may earn a playoff spot.

8. Is Penn State RB Saquon Barkley the Big Ten?s best player?
This is an unequivocal ?yes.? In fact, Barkley is a legit Heisman contender who may have a shot to post the eighth 2,000-yard rushing season in Big Ten annals. The last Big Ten Heisman winner? Ohio State QB Troy Smith in 2006. The last Big Ten running back to win the Heisman? Wisconsin?s Ron Dayne in 1999. Barkley can do it all, and he'll have a prolific passing game at his disposal to keep defenses honest.

9. Can Jeff Brohm cure Purdue?s ills?
Bank on this happening, but not this season. The 2017 campaign will be filled with growing pains, as Purdue has a lot to prove in the trenches, in the secondary and at wideout. Depth and talent are issues. But the Boilermakers haven?t been this well-coached since Joe Tiller left after the 2008 season. And Brohm?s arrival has given the Boilermakers an identity, which they haven?t had since Tiller. Brohm is a smart coach who has built a good staff. And he showed coaching prowess during a successful three-year run at Western Kentucky. Expect this program to challenge for a bowl in 2018.

10. Will Michigan State rebound from a 3-9 season after making a playoff appearance in 2015?
Yes, the Spartans will be improved. But it?s difficult to envision MSU contending in the rugged East Division, as questions loom in East Lansing. Will the play of the quarterback improve? All eyes are on Brian Lewerke. Is the offensive line better? Just one starter is back. How will the defensive line perform? Just one starter is back. Are there leaders on the team, as off-field tumult rocked the program? Questions, questions, questions for Mark Dantonio?s 11th team. It?s vital for this ship to get stabilized and for Michigan State to return to a bowl.

11. Who is the best defensive player in the league?
There doesn?t seem to be a consensus, as a case can be made for several guys: Iowa LB Josey Jewell; Michigan DL Rashan Gary; Ohio State LB Jerome Baker; Indiana LB Tegray Scales; Penn State S Marcus Allen. Who is your pick? I?m going with Jewell, who ranked second in the Big Ten in tackles last season with 124.

12. Is this the year Northwestern wins the West?
It could happen, as this arguably is the most talented team of the Pat Fitzgerald era. There is no better quarterback-running back punch in the West than Clayton Thorson and Justin Jackson. And the line looks good, too. The big question: Who will be the go-to wideout with Austin Carr gone? The defense lost stud LB Anthony Walker, but there is plenty of talent from front to back led by S Godwin Igwebuike. The Wildcats open Big Ten play at Wisconsin on Sept. 30 in a game that will go a long way in shaping the West Division race.

13. Will Jerry Kill improve the Rutgers attack as its new offensive coordinator?
This was one of the biggest coaching staff moves of the offense, as Chris Ash tabbed the former Minnesota coach to inject life into a moribund offense. How bad was it in 2016? The Scarlet Knights were last in the Big Ten in scoring (15.7 ppg); last in total offense (283.2 ypg); last in passing offense (138.3 ypg); 12th in rushing (144.9 ypg). Kill-who worked in an off-field capacity at Kansas State last season–is the eighth offensive coordinator in the past eight years. A big key: developing a QB. And that guy probably will be Louisville grad transfer Kyle Bolin.

14. Can Tom Allen keep the bowl momentum going at Indiana?
The ebullient Allen took over the Hoosiers for the bowl game last year after Kevin Wilson?s abrupt departure in December; now, Allen embarks on his first season as a head coach-at any level-after doing impressive work with as the Hoosiers defensive coordinator last season. Allen quickly put his stamp on the staff by overhauling the offensive coaches and tabbing Mike DeBord as coordinator. There also is a new line coach; running backs coach; quarterbacks coach; receivers coach. The Hoosiers are trying to go bowling for a third year in a row for the first time since a four-year postseason run from 1988-91 under Bill Mallory.

15. Which new starting quarterback is most intriguing?
All eyes will be on Nebraska?s Tanner Lee, who turned heads last season while sitting out after his transfer from Tulane. Lee is a classic quarterback and a tailor fit for the West Coast attack Mike Riley always has wanted to run but couldn?t fully with Tommy Armstrong under center. Now that Armstrong is gone, it?s full-steam ahead with a new-look offense. Throw in a new 3-4 defensive scheme, and in many ways, this will be like Year One for Riley in Lincoln. Other quarterback situations to watch: Illinois, Iowa, Maryland, Minnesota and Rutgers.

16. Will Illinois enjoy a breakthrough in Lovie Smith?s second season?
It doesn?t look that way after a 3-9 debut. There is just too much heavy-lifting to do in Champaign. Where to begin? How about at quarterback, which is a big question. And both lines have something to prove. Sit tight, Illini Nation. Better days are ahead.

17. Who will be the surprise team?
Keep an eye on Maryland, which will be in its second season under DJ Durkin. Few programs have as much momentum as this one. The school is funneling money into facilities, led by the conversion of Cole Field House into a football facility. And Durkin is a recruiting dynamo who is fuelling Maryland with some top talent. It may not be long before Maryland is making a hard push for the top of the East. At the least, don?t be shocked if the Terps pull a few upsets in 2017 and return to the postseason. A big key: Developing a quarterback and continuing to hone line play on both sides of the ball.