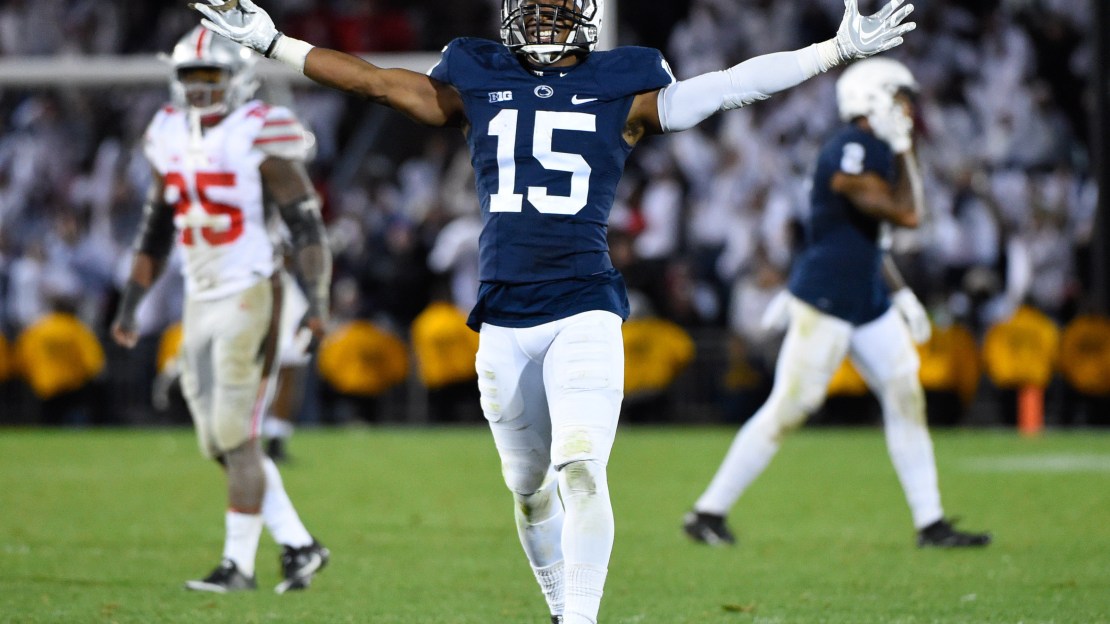 There is no shortage of great games that dot the Big Ten schedule in 2017. The best non-league game? Oklahoma at Ohio State. The best conference tilt? Penn State at Ohio State.

Here is my ranking of the Top 25 games on the Big Ten schedule.

1. Penn State at Ohio State, Oct. 28. Are these the top two teams in the Big Ten? All eyes will be on Penn State?s trip to Ohio State with J.T. Barrett taking on Trace McSorley in an epic QB clash. Making the tilt more challenging for the Nittany Lions: The trip to Columbus comes on the heels of a home game vs. Michigan. You know the Buckeyes have the visit from PSU circled, wanting to payback the Nittany Lions for last season. Penn State was the only team to beat Ohio State in the regular season, shocking the No. 2 Buckeyes, 24-21. Before that, OSU had won four in a row vs. PSU. Penn State last won in Columbus in 2011, taking a 20-14 decision. The Nittany Lions lost 63-14 and 38-10 in their last two visits to the Horseshoe.

2. Ohio State at Michigan, Nov. 25. It?s known simply as ?The Game.? The Buckeyes continue to dominate this series, winning five in a row and 12 of 13. Last year?s 30-27 double OT win by OSU in Columbus was an exciting tilt and left Jim Harbaugh fuming. The last Wolverine triumph vs. the Buckeyes? In 2011 in Ann Arbor. Can Michigan turn the worm in this iconic rivalry? So much could be on the line in this game.

3. Michigan at Penn State, Oct. 21. If Penn State is going to win the Big Ten East again, it probably will need to take care of Michigan when the Wolverines visit. The Nittany Lions got embarrassed by Michigan last year, losing 49-10 to fall to 2-2. Penn State looked nothing like a Big Ten champ that day, but it rallied from that humiliation to win nine games in a row all the way to the league title and Rose Bowl.

4. Oklahoma at Ohio State, Sept. 9. This has the look of a playoff game, as the visit from OU to the Shoe for the second game of the season should be a doozy. The Buckeyes won last season in Norman, 45-24, so you know OU will be stoked for payback. Adding intrigue is the fact former Sooner offensive coordinator and Indiana coach Kevin Wilson is in his first season as Ohio State?s OC. So, a week after he faces the Hoosiers (on a Thursday) in the season opener, he takes on Oklahoma. The Sooners boast one of the nation?s top quarterbacks in Baker Mayfield, a Heisman finalist each of the last two years. His battle with Buckeye signal-caller J.T. Barrett should be one of the top QB battles of 2017.

5. Northwestern at Wisconsin, Sept. 30. Northwestern?s league opener at Wisconsin could turn out to be a de facto Big Ten West title game. Wisconsin won last year vs. NU, but the Wildcats won two in a row before that. These teams are similar, as each can run the ball and has a nice defense. It may come down to which QB makes the most plays: Northwestern?s Clayton Thorson or UW?s Alex Hornibrook?

6. Wisconsin at Nebraska, Oct. 7. Wisconsin has been a nemesis of sorts for Nebraska, the program the Huskers must catch if they want to rule the West and win a conference title for the first time since 1999. This game will feature two intriguing QBs in the Badgers? Alex Hornibrook and the Cornhuskers? Tanner Lee, a transfer from Tulane. Wisconsin has won four in a row vs. the Cornhuskers and five of six.

7. Ohio State at Iowa, Nov. 4. The Hawkeyes and OSU haven?t met since 2013. The Buckeyes are motivated in 2017 after failing to win the Big Ten East each of the last two years. Ohio State has won the last five meetings vs. Iowa. The Hawkeyes? last win? A 33-7 romp in Iowa City in 2004 engineered by Drew Tate. Before that, Iowa hadn?t toppled the Buckeyes since 1991 when Matt Rodgers quarterbacked the Hawkeyes.

8. Michigan vs. Florida, Sept. 2 (at Arlington, Texas). A season-opening tilt vs. Florida in Jerry?s World will be a great litmus test for a Michigan team that is in transition at several positions. Making this game more dangerous for the Wolverines is the fact the Gators are getting better under Jim McElwain coming off back-to-back SEC East titles. Jim Harbaugh? He is still looking for his first title of any sort at Michigan. These storied programs have met three times, all in bowl games. And the Wolverines have won all three, including a 41-7 victory in the last encounter in the Buffalo Wild Wings Bowl after the 2015 season-Harbaugh?s first at Michigan.

9. Penn State at Northwestern, Oct. 7. This could be-COULD BE-a preview of the Big Ten title game. Barring injury, it will be a battle of the Big Ten?s top running backs in Saquon Barkley and Justin Jackson. The Wildcats have won the last two vs. the Nittany Lions. Before that, PSU won six in a row vs. NU.

10. Ohio State at Nebraska, Oct. 14. This will be the Buckeyes? first to Lincoln since 2011, when NU won 34-27 and Luke Fickell was Ohio State?s interim coach. Think Memorial Stadium will be jacked up? The Buckeyes have won the last two vs. Nebraska in dominating fashion, taking a 62-3 decision last year in Columbus and a 63-38 outcome in 2012 in Columbus.

11. Penn State at Iowa, Sept. 23. Penn State heads to Iowa in a very interesting game that is the Big Ten opener for each school. The Nittany Lions have won three in a row vs. the Hawkeyes and won the last time in Iowa City in 2012. Still, Iowa is a difficult out in Kinnick Stadium. This will be a great test for the defending Big Ten champion Nittany Lions.

12. Michigan at Wisconsin, Nov. 18. The Wolverines and Badgers have met just one time since 2010, with Michigan taking a 14-7 decision last year in Ann Arbor. The schools haven?t met in Madison since 2009, as Wisconsin took a 45-24 win. In fact, UW has won the last three vs. Michigan in Camp Randall Stadium, where the Wolverines last prevailed in 2001 in a battle between Lloyd Carr and Barry Alvarez.

13. Iowa at Wisconsin, Nov. 11. If Wisconsin wants to repeat as Big Ten West champs, the Badgers probably will need to take down Iowa when it visits. Wisconsin is 6-3 in the last nine meetings vs. the Hawkeyes. This will be only the second meeting in Madison between these foes since 2009 in a close series that Wisconsin leads 45-43-2.

14. Wisconsin at BYU, Sept. 16. The Badgers trip to BYU will be interesting. Wisconsin should be tuned up by the time it rolls into bucolic Provo. The Cougars will be a difficult out, especially at home. BYU is coming off a 9-4 season and has a good QB in Tanner Mangum. UW probably wants to avoid getting into a shootout with BYU, as this Cougar offense will be a challenge for a Badger defense with a retooled secondary. The all-time series is 1-1, with both games taking place in Madison. Wisconsin won in 2013, while BYU prevailed in 1980.

15. Iowa at Nebraska, Nov. 24. The Hawkeyes have won the last two meetings and three of the last four in this Black Friday affair. If the Cornhuskers want to move up the pecking order of the Big Ten West, they need to start beating Iowa, which will have a new QB.

16. Northwestern at Nebraska, Nov. 4. Don?t be shocked if Northwestern waltzes into Lincoln and beats the Cornhuskers. The Wildcats won the last time they visited Memorial Stadium in 2015. They also won at Nebraska in 2011, making Northwestern 2-1 in Lincoln. Both of these teams have their sights set on winning the West, so it should be a fun clash in what has become one of the better rivalries in the Big Ten West.

17. Nebraska at Oregon, Sept. 9. The Huskers beat the Ducks last year in Lincoln, 35-32, but that was an Oregon squad that went on to finish 4-8 and missed a bowl for the first time since 2004. UO coach Mark Helfrich was fired and the school tabbed Willie Taggart from South Florida to assume command. NU coach Mike Riley knows Oregon well from his days as head coach at Oregon State.

18. Iowa at Northwestern, Oct. 21. An underrated Big Ten rivalry, these two have only played once in Evanston since 2012. The Wildcats have a veteran squad led by QB Clayton Thorson and RB Justin Jackson. By mid-October, the Hawkeyes should be settled at the quarterback spot, and the d-line and secondary should be developed, too.

19. Nebraska at Penn State, Nov. 18. Nebraska has won all three games vs. Penn State as a member of the Big Ten, but the schools haven?t met since 2013. Trace McSorley, Saquon Barkley and Penn State's dynamic offense will provide a stiff test for Nebraska's revamped 3-4 defense.

20. Minnesota at Iowa, Oct. 28. Three words: Floyd. Of. Rosedale. Is there a better rivalry trophy in the galaxy? Nope. The Hawkeyes have won four of the last five battles for the bronze pig and 12 of 16, but freshly minted Minnesota coach P.J. Fleck is a new dynamic.

21. Michigan State at Michigan, Oct. 7. Michigan State is 7-2 in the last nine meetings in this rivalry, and it hasn't lost in Ann Arbor since 2012. The Wolverines ended the Spartans? three-game winning streak in the series last year with a 32-23 triumph in East Lansing. Needless to say, Michigan needs to take care of business if it wants to win the East Division. Few rivalries are as intense as this one.

22. Nebraska at Minnesota, Nov. 11. Nebraska has won the last meetings, ending a two-game losing streak in the series. You know P.J. Fleck will have the Gophers rowing the boat in a home game vs. a rival and blueblood program.

23. Wisconsin at Minnesota, Nov. 25. Wisconsin has dominated the Golden Gophers. In fact, Minnesota hasn?t won Paul Bunyan?s Axe from Wisconsin since 2003, losing the last 13 meetings and 20 of 22 since 1995.

24. Pitt at Penn State, Sept. 9. The visit from Pitt will be epic. These foes renewed their rivalry last year after it was dormant since 2000. Thank goodness. College football is better when these schools clash. The Panthers toppled the Nittany Lions last season, 42-39. You know Panthers coach Pat Narduzzi will have his team ready to invade Beaver Stadium. Pitt has not been to State College since 1999, the last time Penn State beat the Panthers. And Pitt hasn?t won there since 1988, losing the last four visits.