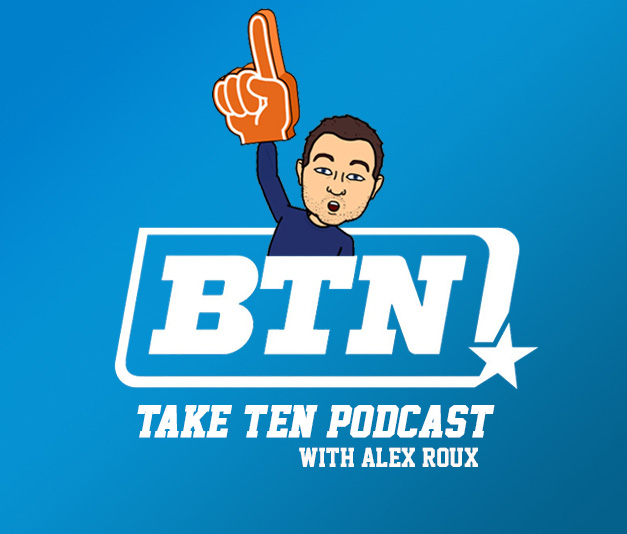 When the newest crop of summer interns toured the Big Ten Network offices on their first day on the job last week, one rose about five inches above the tallest of his peers.

Six-foot-five Scottie Lindsey strolled through the halls as a reigning All-Big Ten Third Team basketball player from Northwestern, and he was about to begin his internship in BTN's Original Programming department. Not a bad gig for the Radio, TV and Film major at Northwestern, and not a bad commute down the Purple El Line from Evanston.

Lindsey joined me for Episode 6 of BTN's Take Ten Podcast, and we talked subjects ranging from his favorite hometown Chicago teams to overcoming various health setbacks to being called out by his head coach. And of course, we talked Northwestern basketball's historic team from 2016-17, on which Lindsey was the second-leading scorer. Listen to the entire interview with Lindsey (@ScottieLindsey) in the SoundCloud player above, in the playlist player below, or on any of the online listening platforms linked above.

You can still find all Take Ten episodes on BTN's Take Ten Podcast channel on iTunes, on Google Play in the "Podcasts" section and on the Podbean online listening platform. Please subscribe, rate and leave reviews on those platforms, because that's what will help fuel the show and allow me to keep bringing entertaining guests into the fold.

I've pulled some notable quotes from the 45-minute chat with Lindsey, so feel free to skip around if you want.

(Skip to 5:41) On how breaking his leg on a visit to Vanderbilt led to his eventual commitment to play for Northwestern.

(9:39) On being called out by head coach Chris Collins to live up to his potential after his sophomore season. Collins said he didn?t think Lindsey was working hard enough and that he didn?t ?want it? enough. ?I had to grow up and be a man about it?He was right.?

(12:22) On missing four games at a critical point in last season while being sidelined with mononucleosis.

(17:12) On how Chris Collins-a Cubs fan-pointed out parallels between his team and the Chicago Cubs, and how he eventually encouraged them to confront their barren NCAA tournament history.

(24:44) Scottie gives a prediction for next season: ?I think we?ll contend for a Big Ten title.?

(27:05) On which three Big Ten basketball players he would send to the 3-on-3 Olympic basketball tournament in Tokyo. (Hint: he?s sending himself.)

(39:19) On celebrating the Cubs winning the World Series in Wrigleyville as a lifelong fan during and after Game 7.