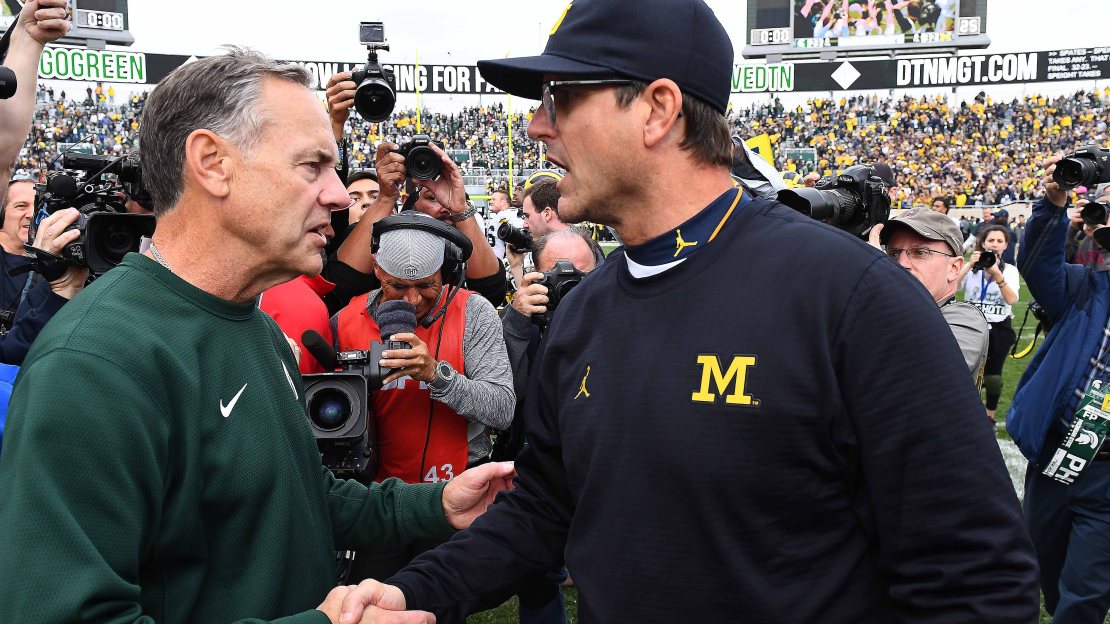 Look at your school?s schedule. Now, get out a red pen and circle the game you feel is a ?must win.? You know, the game that your team can't afford to drop in order to reach its season goals, whether that be bowl eligibility or a division crown.

Here is the game I identified as a ?must win? for each Big Ten squad this year.

Illinois: at Purdue, Nov. 4. This is a program still in transition under Lovie Smith, so wins may be few and far between this fall. Still, Illinois figures to have a good chance to knock off Purdue in the battle for the Cannon when the Illini visits West Lafayette on Nov. 4. Deposed Purdue coach Darrell Hazell went 3-24 in the Big Ten from 2013-16-but two of those victories were vs. Illinois, including a 34-31 OT win in Champaign in 2016. But the Fighting Illini have won the last two times they visited Ross-Ade Stadium.

Indiana: at Purdue, Nov. 25. To reach a bowl for a third straight season-something the program hasn?t done since 1986-88–Indiana needs to win its season finale at Purdue on Nov. 25. The Hoosiers have taken command of the Old Oaken Bucket series, winning four in a row for the first time since 1944-47. Can Indiana continue its mastery over the Boilermakers in the first clash between Tom Allen and new Purdue coach Jeff Brohm? IU never has won five in a row vs. Purdue but it did win seven of eight from 1940-47.

Iowa: vs. Illinois, Oct. 7. There actually are two of them. If Iowa wants to make a run at the Big Ten West title, it needs to take care of business at home vs. Illinois on Oct. 7 and vs. Purdue on Nov. 18. The Hawkeyes are 8-1 in their last nine vs. the Illini. Illinois last won in Iowa City in 1999 when Ron Turner was coach. Iowa is 9-2 in its last 11 vs. the Boilermakers. Purdue is 2-7 in its last nine in Kinnick Stadium.

Maryland: vs. Rutgers, Nov. 4. Scratching out six wins to attain bowl eligibility may be a challenge, which makes a victory over the Scarlet Knights, who went winless in the Big Ten last season, a must. Maryland is 2-1 vs. RU since both joined the Big Ten, winning the last two meetings.

Michigan: vs. Michigan State, Oct. 7. The Wolverines need to take care of business at home if they want to win the East Division for the first time. And that means dumping its instate rival. Few rivalries are as intense. The Wolverines ended the Spartans? three-game winning streak in the series last year with a 32-23 triumph in East Lansing. Now, Michigan will try to beat MSU in Ann Arbor for the first time since 2012 in a series that has seen Michigan State go 7-2 in the last nine meetings. Who can forget the Spartans? last trip to the Big House in 2015, when a botched Wolverine punt was returned 38 yards by Jalen Watts-Jackson for a game-winning touchdown by Michigan State as time expired in a 27-23 MSU triumph?

Michigan State: vs. Iowa, Sept. 20. If the Spartans want to rebound from last year?s disappointing 3-9 season, they need a nice win vs. a quality foe early in the schedule to give them confidence. So, how about MSU knocking off the Hawkeyes in the Big Ten opener? This could be a beatable Iowa squad coming off an 8-5 season that has a new quarterback, questions at receiver and a rebuilt secondary. The Spartans have won the last two-and three of four–vs. Iowa, including a 16-13 triumph in the 2015 Big Ten title game. The Hawkeyes won their last visit to East Lansing in 2012.

Minnesota: vs. Michigan State, Oct. 14. To make it six bowls in a row, Minnesota will need to take down the Spartans. This is a Michigan State program trying to rebound from a confounding 3-9 season that saw MSU miss a bowl for the first time since 2006. What to make of the Spartans? Who knows? Michigan State has won the last four meetings, but the teams haven?t clashed since 2013 and haven?t met in Dinkytown since 2012. The Gophers? last victory at home vs. the Spartans? It came in 2009.

Nebraska: There are two, as Nebraska needs to win at Illinois on Sept. 29 and at Purdue on Oct. 28. The Huskers suffered embarrassing losses the last time they visited both schools in 2015. No doubt, the Cornhuskers will want revenge after Illinois scored 14 fourth quarter points to take a 14-13 decision in Champaign. And the 55-45 loss at Purdue was a catastrophe and one of the worst losses in school annals. The Huskers had five turnovers and came up short even after scoring 29 fourth-quarter points. This was just one of three Big Ten wins the Boilermakers netted the last four seasons-and the program?s only conference home victory from 2013-2016. The ignominy for Nebraska.

Ohio State: vs. Penn State, Oct. 28. You know the Buckeyes have this tilt circled in red, wanting to payback the Nittany Lions for last season when the Nittany Lions were the only team to beat Ohio State in the regular season. Penn State shocked the No. 2 Buckeyes 24-21 after Grant Haley ran back a blocked field goal 60 yards for the winning TD late in the fourth quarter. Penn State last won in Columbus in 2011, taking a 20-14 decision. The Nittany Lions lost 63-14 and 38-10 in its last two visits to Ohio State.

Penn State: vs. Michigan, Oct. 21. If Penn State is going to win the Big Ten East again, it will need to take care of Michigan when the Wolverines visit on Oct. 21. The Nittany Lions got embarrassed by Michigan last year, losing 49-10 to fall to 2-2. Penn State looked nothing like a Big Ten champ that day, but it rallied from that humiliation to win nine games in a row all the way to the league title and Rose Bowl.

Purdue: vs. Indiana, Nov. 25. Goal No. 1 for new Boiler boss Jeff Brohm: stop losing to Indiana, which visits in the season finale. The Hoosiers have taken command of the Old Oaken Bucket series, winning four in a row for the first time since 1944-47. Can Indiana continue its mastery over the Boilermakers, who has just one winning record (7-6 in 2011) since 2007? Until Purdue gets the upper hand back in this series, making any tangible progress up the standings will be challenging.

Rutgers: vs. Maryland, Nov. 4 – Yankee Stadium. Word of warning: The game is sandwiched between trips to Michigan and Penn State. Still, RU needs to find a way to topple the Terrapins. Maryland has won two of the three meetings since the schools joined the Big Ten together in 2014, with the Terps taking the last two games. Rutgers forever will be measured against Maryland. And it needs to get the upper hand.

Wisconsin: vs. Iowa, Nov. 11. If the Badgers want to repeat as Big Ten West champs, they will need to take down the Hawkeyes. Wisconsin is 6-3 in the last nine meetings. This will be only the second meeting in Madison since 2009 in a series Wisconsin leads 45-43-2.