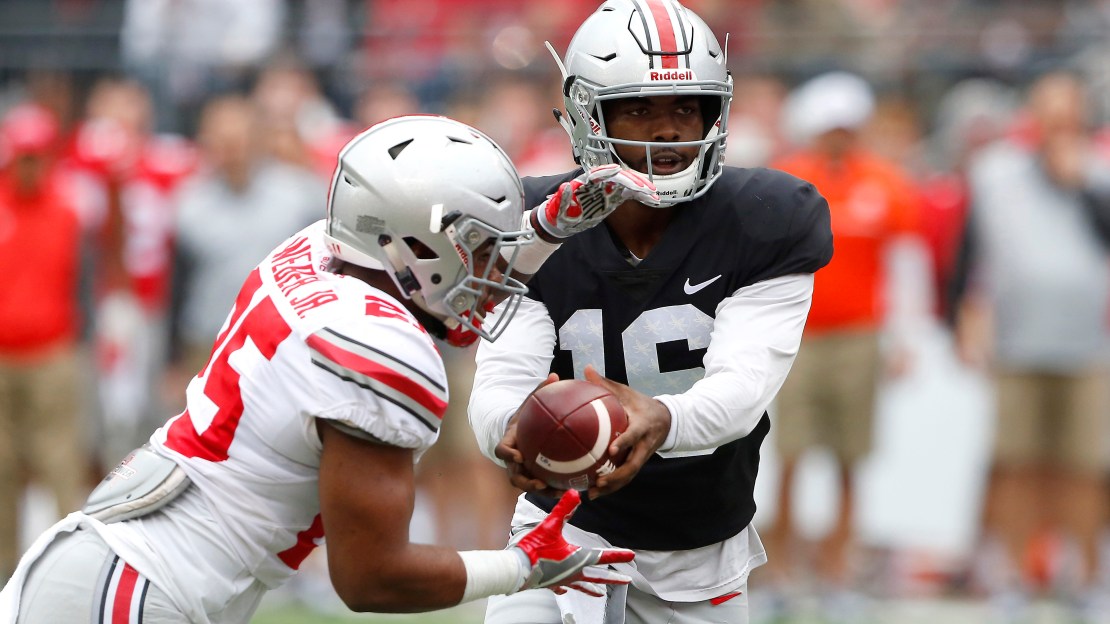 The Michigan-Ohio State game always is one of the most anticipated Big Ten games each season. But there are other enticing league contests on tap this fall.

Here is a look at the toughest conference game for each Big Ten school.

ILLINOIS
At Ohio State, Nov. 18. Illinois? second-to-last game of the season is at the Horseshoe vs. the Buckeyes, the bellwether program in the Big Ten. Who knows what type of shape the Fighting Illini will be in when they venture to Columbus to battle for the Illibuck Trophy. The Buckeyes have won eight straight in the series. The last time Illinois won? It was 2007, when the Illini knocked off the No. 1 Buckeyes in Columbus, 28-21, behind Juice Williams.

INDIANA
Vs. Ohio State, Aug. 31 (Thursday). Indiana went 2-1-1 vs. the Buckeyes from 1987-90, including a victory in Columbus in 1987 back when Bill Mallory was coach. Since then, the Hoosiers have lost 22 in a row in the series. This is a big bite for new coach Tom Allen in his first game as head coach in Bloomington. Adding to the intrigue of this season opener: Allen will face former boss Kevin Wilson, who is the Ohio State offensive coordinator.

IOWA
Vs. Ohio State, Nov. 4. The Buckeyes should be motivated after failing to win the Big Ten East each of the last two years. Iowa and OSU haven?t met since 2013. The Buckeyes have won the last five meetings. The Hawkeyes? last win? A 33-7 romp in Iowa City in 2004. Before that, Iowa hadn?t toppled the Buckeyes since 1991.

MARYLAND
At Ohio State, Oct. 7. The Terrapins have been manhandled in each of their three meetings with the Buckeyes as a member of the Big Ten, going 0-3 and losing by an average score of 54-18 (being outscored 163-55). Last year, OSU won, 62-3.

MICHIGAN STATE
At Ohio State, Nov. 11. As if this game wasn?t tough enough, this tilt comes on the heels of a visit from Penn State. MSU and OSU have split the last six meetings, as the Buckeyes won last year in East Lansing, 17-16. The year before with a backup quarterback, Michigan State stunned Ohio State in Columbus, 17-14, to cost the Buckeyes a shot at defending their national title. In fact, the Spartans have won their last two trips to the Horseshoe.

MINNESOTA
At Michigan, Nov. 4. Making the Little Brown Jug game more challenging is the fact this game is sandwiched between a game at Iowa and a visit from Nebraska. Michigan and Minnesota have split their last two games, with the Gophers winning in Ann Arbor in 2015 and almost prevailing last season before the Wolverines won, 29-26, at Minnesota. P.J. Fleck vs. Jim Harbaugh. Gotta love it.

NEBRASKA
At Penn State, Nov. 18. The Nittany Lions are loaded and may be the preseason Big Ten favorite coming off an improbable conference title in 2016. These storied programs haven?t clashed since 2013-in State College–and have met just three times since the Cornhuskers joined the Big Ten in 2011. And Nebraska has won all three meetings. PSU last toppled the Huskers in 2002 in Beaver Stadium.

NORTHWESTERN
At Wisconsin, Sept. 30. These teams may be the favorites to win the West. This is the Big Ten opener for each team, but could this be a de facto Big Ten West title game? Wisconsin won last year vs. NU, but the Wildcats won two in a row before that. These teams are similar, as each can run the ball and has a nice defense. It may come down to which QB makes the most plays: Northwestern?s Clayton Thorson or UW?s Alex Hornibrook.

OHIO STATE
At Michigan, Nov. 25. There are some tough road games, including trips to Nebraska and Iowa. But let?s go with the season-ending visit to Michigan for ?The Game.? Ohio State continues to dominate this series, winning five in a row and 12 of 13.

PENN STATE
At Ohio State, Oct. 28. Making this game more challenging for the Nittany Lions: The trip to Columbus comes on the heels of a home game vs. Michigan. You know the Buckeyes have the visit from PSU circled in red, wanting to payback the Nittany Lions for last season. Penn State was the only team to beat Ohio State in the regular season, shocking the No. 2 Buckeyes 24-21 after Grant Haley ran back a blocked field goal 60 yards for the winning TD late in the fourth quarter. Before that, OSU had won four in a row vs. PSU. Penn State last won in Columbus in 2011, taking a 20-14 decision. The Nittany Lions lost 63-14 and 38-10 in their last two visits to the Horseshoe.

WISCONSIN
Vs. Michigan, Nov. 18. The Wolverines and Badgers have met just one time since 2010, with Michigan taking a 14-7 decision last year in Ann Arbor. The schools haven?t met in Madison since 2009, as Wisconsin took a 45-24 win. In fact, UW has won the last three vs. Michigan in Camp Randall Stadium, where the Wolverines last prevailed in 2001.