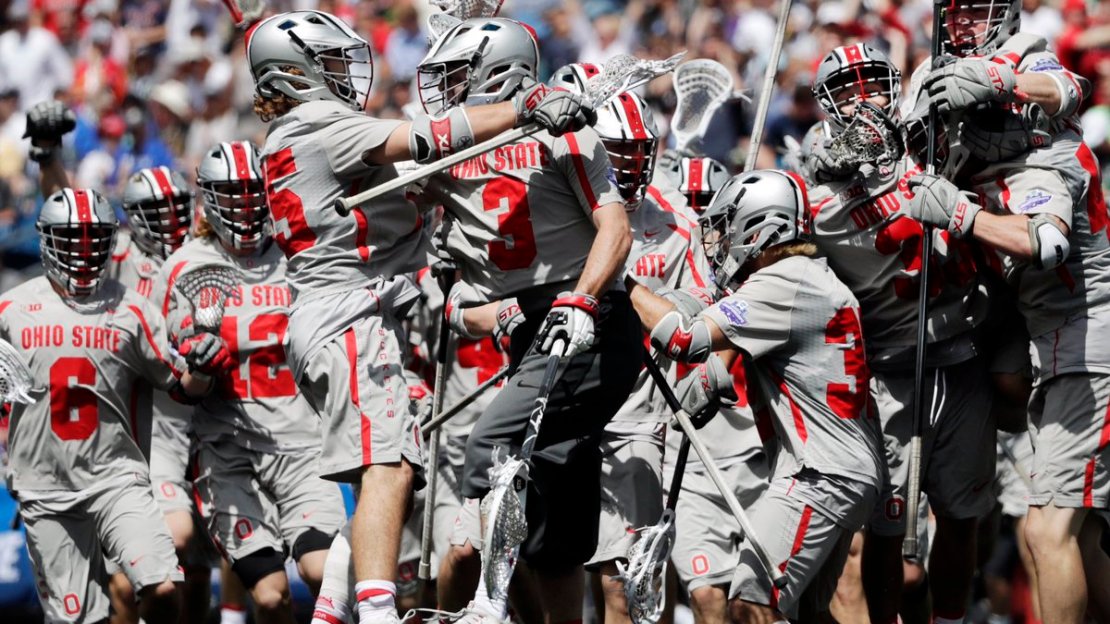 First, Ohio State edged Towson 11-0 after storming back from a first-half deficit. Recap from OhioStateBuckeyes.com:

The No. 3-seeded Ohio State men's lacrosse team came back from a five-goal third-quarter deficit to top Towson, 11-10, Saturday afternoon at Gillette Stadium. With the win, the Buckeyes advance to the first national championship game in program history, and will take on top-seeded Maryland at 1 p.m. ET Monday on ESPN2.

Ohio State moves to 16-4 on the season, breaking the program record for wins in a single season first set in 1965.

After allowing the first goal of the game, the Buckeyes responded with a pair midway through the first 15 minutes before the Tigers answered late in the first quarter to knot the score at 2-2. Towson then scored five of the six second-quarter goals and used eight Buckeye turnovers to take a 7-3 lead at halftime.

The Tigers scored the first goal coming out of the half to make it an 8-3 game but Ohio State scored five of the six goals the rest of the quarter to cut the Towson lead to 9-8 after three quarters. The Buckeyes opened the fourth with a pair of quick goals by Tre Leclaire and JT Blubaugh before Johnny Pearson notched an insurance goal to put Ohio State up 11-9. Towson got one goal back with less than four minutes remaining but the Buckeyes were able to hang on for the one-goal victory.

A few hours later, Maryland won a thriller over Denver. Recap from umterps.com:

FOXBOROUGH, Mass. — The No. 1 Maryland lacrosse team secured its third straight trip to the NCAA Championship game after knocking off fifth-seeded Denver 9-8 in Saturday's semifinals at Gillette Stadium. The game came down to the final possession, as the Terps held off the Pioneers to seal a one-goal victory.

?I'm really proud of our guys and excited to continue this journey onto Monday,? said head coach John Tillman. ?Couldn't be more proud of the effort and just the resolve our guys showed today against a great Denver team…I'm just happy to get two more days with our players, and we obviously have a huge challenge ahead of us. But we're going to try to take the next couple days here to get prepared.?

Maryland advances to Monday's Memorial Day Championship game vs. Ohio State. Faceoff is slated for 1:00 pm and the game will be broadcast on ESPN2 and streamed via WatchESPN.

The final two minutes of the contest proved to be crucial, as the Terps maintained a one-goal lead with possession late. Senior Colin Heacock appeared to have a diving goal at the 1:25 mark, but it was called off after the officials signaled he was in the crease.

After Denver broke a timeout, the Pioneers looked to have the tying goal after Connor Donahue made a diving effort to score. But again, the officials called a crease violation, and the Terps ran out the remaining seconds as Maryland punched its ticket to its 14th all-time National Championship game.

Junior Connor Kelly led the way for the Terps offensively, notching a game-high three goals, while seniors Dylan Maltz and Colin Heacock both tallied two each to pace the Terps' offense.

Maryland built up a 4-1 lead in the first half, before eventually heading into the break with a 5-3 advantage. The Terps continued to hold the lead into the fourth, before a goal from Denver's Ethan Walker tied the game at eight with 10 minutes to go.

Maryland's faceoff unit held its own against the nation's leader in faceoff percentage in Denver's Trevor Baptise, as Austin Henningsen and Jon Garino Jr. combined to go 10-for-21.

Maryland's Matt Rambo became the program's goals leader with his first quarter strike, as his 154 all-time goals passed Joe Walters ('06) for first on the all-time list. He also now has the most points (59) since 2000 in NCAA tournament play.

Watch how @TerpsMLAX held off Denver to reach the #NCAALax National Championship Game.