Facebook Live: We watched Illinois over No. 1 Ohio State from 2007 with J Leman 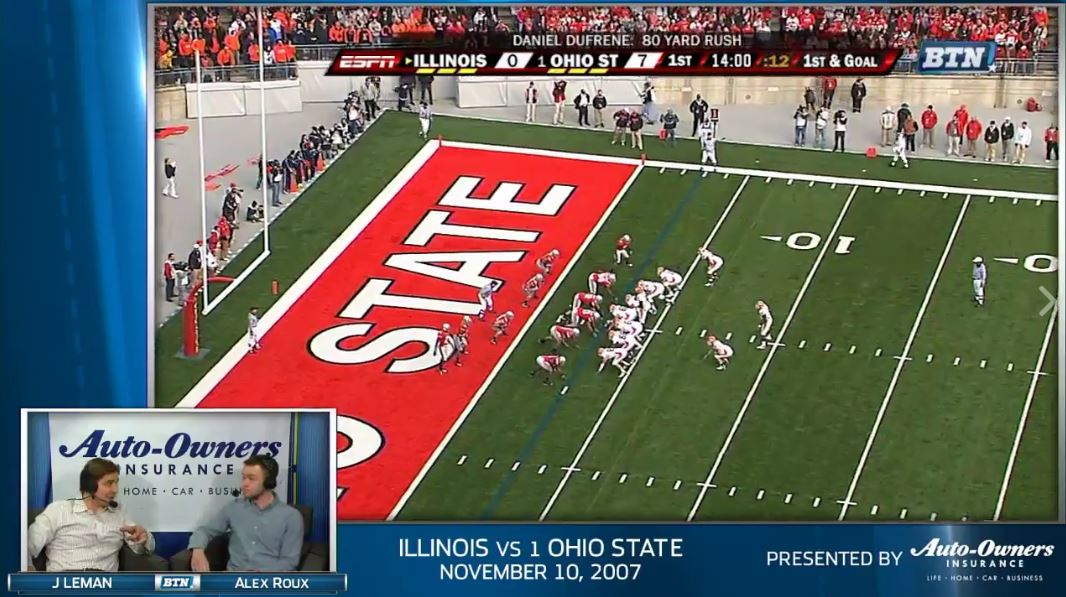 Former Illinois Linebacker and current BTN football analyst sat down with me to re-watch a massive Illini football upset from 2007 at No. 1 Ohio State.

We've now re-watched three old Big Ten basketball games and two football game with former Big Ten players on Facebook Live, and it's been a lot of fun pulling them off.

BTN.com Senior Writer Tom Dienhart got this new series started when he sat down with former Iowa player and current BTN analyst Jess Settles to watch an Illinois vs. Iowa game from 1996. I sat down with former Wisconsin Badger Ben Brust to re-live his 2013 half-court buzzer beater against Michigan back in February. Former Michigan hooper Zack Novak (who actually now works in the same office building that holds the BTN studios!) was kind enough to join us in March to take us through a pivotal Michigan vs. Michigan State basketball game from 2011. And former Nebraska wide receiver Jordan Westerkamp joined me to re-watch his miracle Hail Mary catch from 2013.

We pulled some of Leman's best quotes from the segment below.

On saying during the game broadcast that he wanted to be an infomercial host (skip to about 13:40): Don?t sleep on that, now. Billy Mays was one of my heroes growing up. I don't know if you remember Billy Mays, from Oxy Clean. So watch out for the infomercials, I love the concept. I still watch the Magic Bullet when it?s on the Public Access channels. Lori Greiner is the Queen of QVC? Watch out, I?m going to be the king.

His breakdown of his own broadcasting skills from 10 years ago (16:10): Okay, No. 1: where did I get the accent from? That was made up. No. 2, who says ?nasty? like that? I don?t know what was going on there. But again, if I was auditioning for a broadcasting job, I don?t know who would ever hire me.

On how hard it was to stop an Illini option running game featuring Juice Williams and Rashard Mendenhall (25:45): Everything looks the same. You?ve got Juice at 230 pounds, Rashard at 235, Arrelious (Benn) sometimes got the pitch at 230, and you can run option, zone read, QB keep or option pass and they all look the same. So we had four or five plays that looked really good, but they all looked the same (to the defense.)