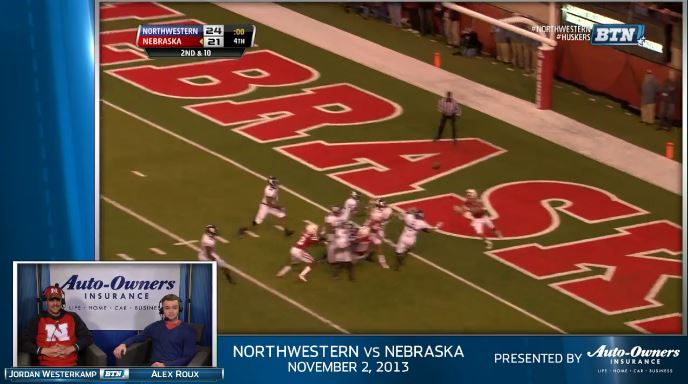 We've now re-watched three old Big Ten basketball games and one football game with former Big Ten players on Facebook Live, and it's been a lot of fun pulling them off.

BTN.com Senior Writer Tom Dienhart got this new series started when he sat down with former Iowa player and current BTN analyst Jess Settles to watch an Illinois vs. Iowa game from 1996. I sat down with former Wisconsin Badger Ben Brust to re-live his 2013 half-court buzzer beater against Michigan back in February. And former Michigan hooper Zack Novak (who actually now works in the same office building that holds the BTN studios!) was kind enough to join us in March to take us through a pivotal Michigan vs. Michigan State basketball game from 2011.

More Facebook Lives with former players are in future plans, so stay tuned for your favorite team, game or athlete to pop up. Former Illinois linebacker J Leman will do a Facebook Live on April 28 recounting the Illini's upset at No. 1 Ohio State in 2007.

Some of Westerkamp's reactions throughout the game are featured below.

On rehabbing his knee injury before the NFL Draft (skip to 2:15): I?ve still been getting a lot of interest (from NFL teams). Injuries happen in football and in sports, you know, and I?ve been able to power through. I?m 100 percent healthy now and looking forward to this weekend and what this future holds.

On why he chose to play at Nebraska over Northwestern and others (4:25): After I took my visit to Nebraska I just absolutely fell in love with the school. From the fans, to the facilities, to the coaches, to the academics. Everything there, it was just the total package, I fell in love with it, and that never changed.

On the least intimidating stadium in the Big Ten (13:30): ?It?s a great stadium, and more so I just think it was because the crowd turnout wasn?t as great as I thought it would be, but when we played at Michigan a couple years back they didn?t really fill the whole thing up. So I was really let down, because I hear so much about the Big House. Still, it was awesome to be there and see it, but I think just because the crowd wasn?t completely filled in, it was just kind of weird and didn?t really make sense to me at that time ? But the stadium is still fantastic and Michigan is an awesome program.

On punter Sam Foltz, who passed away in a car accident before the 2016 season (20:00): It was very sudden with what happened, and we really couldn?t believe it at all. It was tough, not only for his friends and family, but for the entire state of Nebraska, because Sam was such a beloved guy. Just a guy who would always come in and work his tail off and crack a joke and make you smile and make your day better. It was just tough to lose a good friend like Sam. We did a lot to honor him this year and we will continue to do that, because he?s left such a great legacy and he?ll never be forgotten.

On the Hail Mary play call (38:30): The play?s called ?Geronimo?. And it?s part of our end-of-game package that we would practice every single Friday before the game and we?d walk through our last couple plays in case we needed to do it. So we were prepared. We were ready for this situation.