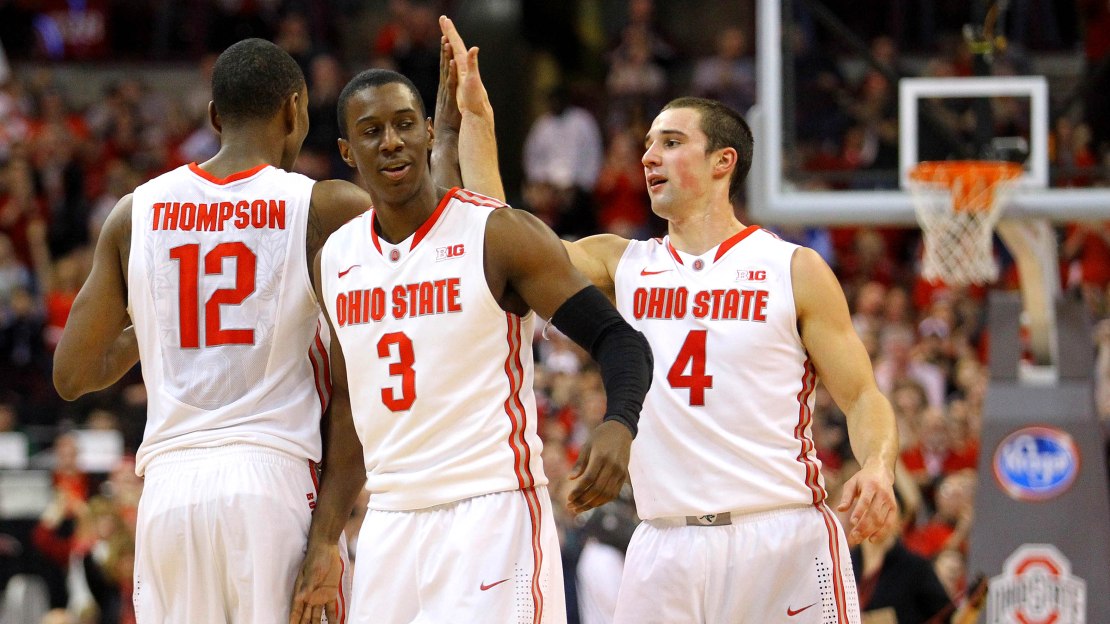 If you're an Ohio State fan, you loved him. If you're a fan of any other Big Ten team, you most likely despised him, the ultimate compliment for a star.

I'm talking about two-time Big Ten Defensive Player of the Year Aaron Craft. The former rosy-cheeked Ohio State defensive dynamo is still frustrating opponents on the hardwood, these days for Aquila Basket Trento in Italy. A couple more updates: He's married, to wife Amber, and continues to aspire to be a doctor.

I recently caught up with Craft for an email Q&A.

BTN.com: Is Taco Tuesday still a thing at your place?
AC: Of course Taco Tuesday still lives on! However, I must admit, it is not as regimented as it was during the college years. Amber and I like changing it up as well by substituting taco salads or fajitas occasionally, so it isn't always tacos. But when we start a family, God willing, you can be certain I plan on instilling the tradition into my children.

BTN.com: Give us your ideal taco toppings.
AC: Ideal taco setup would be soft shell, unless you have access to Stand-N-Stuff hard shells (we don't over here). We used beef and turkey while in school, but recently Amber and I have used chicken, which makes me feel a little better about myself for eating so many at one time. Lettuce, tomato, and cheese are musts, and we usually use plain greek yogurt to substitute for sour cream.

BTN.com: Are there still plans to be a doctor someday?
AC: Obviously becoming a doctor is a very time consuming endeavor, and the longer I play basketball the less likely it seems it may happen. However, I recently talked to Simon Fraser (former OSU football player who played four seasons in the NFL) because he returned to medical school after playing. So, the delayed start isn't an insurmountable obstacle which gives me hope that going back is definitely still possible someday. I love basketball, but I can't play it forever. Becoming a doctor is what I envisioned for my life, but now I have more than myself to think about and care for. My wife definitely has a major say in what the transition from basketball might look like, but I think medical school will always be the first job path I consider outside of basketball.

BTN.com: For the young kids out there, what did you do to work on your defense, to become such a lockdown guy?
AC: I really wish I had something profound and philosophical to say to sound smart and intellectual, but I don't. If I really had to think about it, I would say it all started with quality coaching while I was growing up. Whether from my dad, my AAU coach, to even my high school coaches, they taught me the fundamentals of team defense, correct positions to be in, when to help, having a teammate's back, and, perhaps most importantly, not wanting to let my teammates down. From there, it morphed into a mindset and a challenge for me each game to frustrate and make things as difficult as possible for the other team's best guard. I saw it helped my team be successful, so I wanted to keep doing it.

I think one other thing that is easily missed is you have to have a strong mind to be a great defender. You have to remember you are guarding great players that are very talented, so most likely they are going to score and even make some tough baskets. But you can't let that deter you from coming back the next possession and getting after it again. He has to know you are going to harass him all game, every possession, regardless of how many times they score.

BTN.com: If you were to play a game of one-on-one vs. former Purdue G Chris Kramer, would anyone score?
AC: Great question! I am sure some baskets would be made, but like a true Big Ten matchup it would be a grinder. Maybe even have to lower the game point from 11 to 7 after a couple hours of playing.

BTN.com: What?s the most flattering thing a rival Big Ten student section chanted at you?
AC: I'm not sure the word "flattering" is the word I would use to describe the things most of the student sections said. There were definitely some clever ones, though. I remember at Nebraska someone had a sign that said "Craft wears Cargos" cause apparently they went out of style a while ago and I didn't get the memo. Freshman year, Purdue sang "Party in the USA" during the game, although it might have been directed at Jared (Sullinger) or Jon (Diebler).

BTN.com: Which Big Ten player did you least enjoy guarding, and why?
AC: I honestly can't say there was one a didn't enjoy guarding. One of my favorite parts about the Big Ten during my time was the high volume of very skilled guards in the league. Every week was another challenge, and I loved that. One week it's Demetri McCamey, then Jordan Taylor, Tim Frazier, Kalin Lucas, D.J. Newbill, Darius Morris, Trey Burke, Devyn Marble, Nik Stauskas, Tim Hardaway, Yogi Ferrell, Michael Thompson, Keith Appling, and the list just keeps going. I didn't dislike that, I enjoyed the new challenge and opportunity every game.

BTN.com: You were fouled on that would-be OT-forcing drive to the bucket at Michigan, right?
AC: Well, since you brought it up…. I think so! And why not call it and give me an opportunity to keep the game going? Pretty sure it was highly entertaining to watch, and I think the best battle I had against Trey. They must have been getting tired of having to look at us in our ketchup and mustard jerseys.

BTN.com: Tell us something about Mark Titus that we don?t know.
AC: Played one open gym with Mark just before I got to school, and we didn't lose. Mark really is a solid basketball player who can really shoot it. And, now that I think about it, a man by the name of Greg Oden may have had something to do with us not losing too.

BTN.com: What was the best part of throwing alley-oops to a guy like Sam Thompson?
AC: The worse the pass, the better the highlight! Early on I remember thinking I threw a bad one that he couldn't get, but he would always find a way to. After that I stopped worrying and tried to just get the ball in the vicinity for him to do the rest. The one downside to it was he spoiled me. I can't just throw lobs anywhere and everywhere and have someone catch them. He made me lackadaisical in a sense, so I had to adjust to throwing them to "normal" jumpers again.

BTN.com: What plays or moments from your Ohio State career do you most often think about?
AC: Honestly, it is a mix of both positive and negative. A lot of the close games that we ended up losing still pop in my head from time to time and the possessions or decisions I wish I could change. Kentucky in the tournament freshman year, intentional FT miss at the Final Four, last two possessions of the Dayton game. The positive ones that most frequently come back: Will's game-winner at MSU sophomore year, win at Indiana junior year, home game against Wisconsin freshman year. And I currently have an Iowa State alum (Dustin Hogue) on my team, so the game-winner has come up a time or two! Haha.

Best Italian dish you?ve had in Italy? Pasta with bolognese sauce has been solid anywhere I have had it.
Prettiest city you?ve visited overseas? Five close knit coastal cities called Cinque Terre here in Italy. Vienna close second.
How many words can you say in Italian? Not nearly enough. Mostly basketball related words coach likes to yell at us!
Have any fun nicknames over there? Nope, but they do mostly use my first name which is unusual. Usually Craft, A, or AC