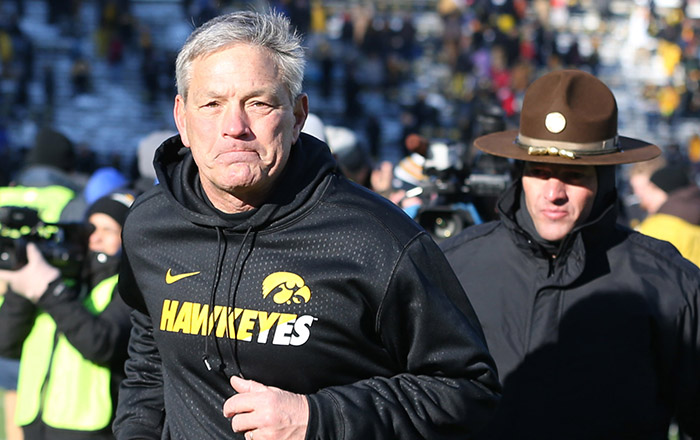 IOWA CITY, Iowa - With progress comes change. At least that?s the hope at Iowa, which has a lot new moving parts on offense.

The defense? The song remains the same on that side of the ball with longtime coordinator Phil Parker still running the show. But check out this roll call of change on offense for the 2017 Hawkeyes.

?A lot of things have changed and that?s something we?re all working through,?? offensive lineman Sean Welsh said. ?We?re going to be fine. But, we all find ourselves with a lot of work to do.??

For now, that work came to an end Friday in Iowa?s spring game. It was the first time to get an extended look at the team since it underwent myriad change on offense. Watershed alterations like this for an Iowa program that has been a rock of stability since Kirk Ferentz took over for Hayden Fry in 1999 are rare. So, this is big stuff. Will it all work?

Last season was a bit of a downer, as Iowa went 8-5 a season after a glorious 12-2 campaign in 2015 that saw the Hawkeyes win the Big Ten West for the first time and play in the Rose Bowl for the first time since the 1990 season. Perhaps a revved and altered offense will help push the Hawkeyes back to Indianapolis for the Big Ten title game in 2017. At least that?s the hope.

The offense needs to be more dynamic, as it struggles to stretch the field. Explosiveness in the passing game is rare. Last year, the Hawkeyes ranked No. 10 in the Big Ten in scoring (24.9 ppg). The passing game was even worse, coming in No. 13 (153.2 ypg).

The crowd saw some flashes of what the offense could look like in the fall. Expect more counters and misdirection in the run game. And the tight ends-an area of strength with Noah Fant and Peter Pekar-will be used a lot, even down field.

Then there is the quarterback battle between Nate Stanley and Tyler Wiegers. Ferentz told me this week he doesn?t expect to name a successor to Beathard until midway through training camp in August. Each had their moments tonight, as Stanley showed a nice arm and Wiegers is nifty with his feet.

The fact star running back Akrum Wadley is on the ?do not touch? list kept the offense?s best weapon at bay. Look for the staff to try to get him in space often. No doubt, he is the most explosive option on this offense. Fans got a look at the options behind Wadley. And, they are good: Toren Young and Toks Akinribade. Each runs hard.

Wideout is a big, big concern ? again. There were just two scholarship wideouts available Friday. So, how much did we really learn? Not much. Stay tuned. But, there seems to be some potential in newcomer Nick Easley, Adrian Falconer and Devonte Young. But are there any difference-makers? The job of the wideouts has changed a lot. Check it out.

?It?s definitely tougher to learn than systems I?ve been in in the past, but I?ve just been trying to study and get everything down,? said Easley said the week of the game.

It?s a lot of new stuff in a revamped Iowa playbook.

?To say that we?re throwing everything in,? Brian Ferentz said prior to the game, ?that?s probably fair from this standpoint: We?re trying to get as much on tape, as much evaluated, as we can. We try not to throw it all at them at once, but it has stacked up.?

There is more motion pre-snap by the wideouts along with more route variety. But not having the team?s best wideout available (Matt VandeBerg out with injury) hurts. Also, rising Jerminic Smith is dealing with academic issues.

One area that remains steady at Iowa: The offensive line. It?s the bellwether of the program, the Rock of Gibraltar and foundation of everything Iowa does. From Robert Gallery, to Bryan Bulaga to Brandon Scherff, offensive linemen are kings in Iowa. And this year?s unit looks good with four starters back in James Daniels, Ike Boettger, Boone Myers and Sean Welsh.

?I?ve had the luxury of having the same coach, the same offense for four years,? Welsh said. ?It?s interesting to see how the details change. We really haven?t changed a whole lot. And the coaches have done a great job making it seem like there isn?t a transition.?

Polasek has an energy level that is similar to Brian Ferentz.

?He?s our main guy right now,? Myers said. ?He?s doing a really good job with us right now. He?s very passionate, loves the game, and he loves coaching. That?s good for us. That?s what you want. You want to play for somebody who loves the game, loves working with his guys.??

A heavy dose of tight ends is another thing you can count on this fall. Like offensive linemen, tight ends have been a staple of this program under Ferentz, producing the likes of Dallas Clark, Tony Moeaki and Scott Chandler, among others. This year?s team has some nice options at tight end, even with George Kittle gone. Pekar and Fant are two good starting points. Don?t be surprised if you see Iowa try to hit its tight ends with more downfield passes this year.

?We have work to do,? said Ferentz. ?But we have made some progress.?