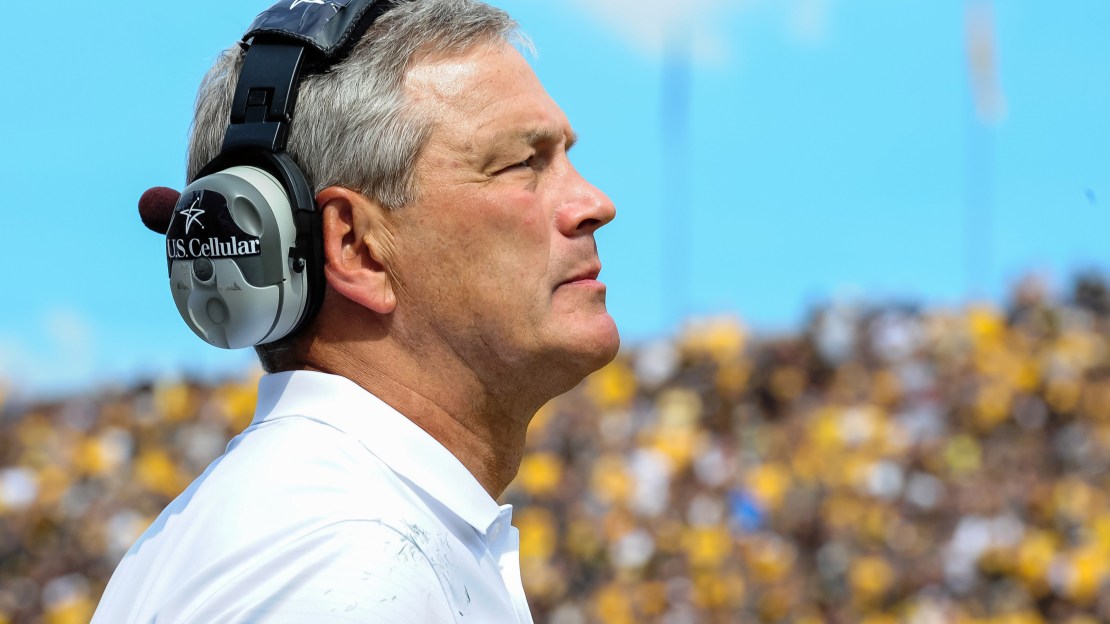 Kirk Ferentz is the ?grandfather of Big Ten coaches,? as he enters his 19th season at Iowa coach. And, he?s still going strong.

The 61-year-old Ferentz arrived in Iowa City in 1999 and has made the Hawkeyes one of the most consistently successful programs in the league. Ferentz has won two Big Ten titles (2002 and 2004) and claimed the 2015 Big Ten West championship, compiling a 135-92 overall record and an 83-64 Big Ten mark.

Ferentz and the Hawkeyes have a chance to win the West and reach the Big Ten title game for the second time in 2017, but they have some questions to answer. A quarterback must be found with C.J. Beathard gone and the secondary needs to be rebuilt. And are there any big-play wideouts?

I caught up with Ferentz as he put the finishing touches on spring football.

Q: How is the quarterback battle between Nathan Stanley and Tyler Wiegers shaking out?
A: It?s a tossup right now. Nothing in the passing game looks overly smooth right now. But, it?s coming along.

Q: When do you think you?ll pick a starter?
A: My guess would be probably during camp, hopefully by the midpoint in camp.

Q: How do the receivers look?
A: Our best guy is on the sidelines, (Matt) VandeBerg has another foot issue. He will be out until summer. After that, we are very unproven. We have a couple of guys who played a little last year in (Adrian) Falconer and (Devonte) Young. I have (Jerminic) Smith in academic timeout. Hopefully we?ll get him back. That is clearly the spot on our team now for growth. We have an incoming guy in Nick Easley who joined us in January. He has done a nice job but isn?t ready for prime-time yet but has a chance to help us.

Q: Will the offense look any different with your son, Brian, as coordinator?
A: The way we played in 2015 is the way we want to be or look like. We had pretty good balance that season. The other part of the equation is what our personnel will allow us to do. We don?t have a lot of depth or proven experience at receiver, so I could see us using more multiple tight end formations. We have potential for more depth at that spot. Overall, we won?t be dramatically different.

Q: What has it been like having former OC Ken O?Keefe back as quarterbacks coach?
A: It has been great. When he left, we lost a top-notch coach and teacher but replaced him with a similar guy in Greg Davis. When Greg retired, we were able to get a veteran back on the staff in Ken. On top of that, Ken has a lot of Iowa experience which I think is really beneficial. Brian is a first-time coordinator but we will have guys in the room who have done it in Ken and (offensive line coach) Tim Polasek, who did it at North Dakota State. The discussions have been good and vibrant with good back and forth on ideas.

Q: How is the secondary coming together?
A: We have three new guys in the back end right now. And three up front right now, too, because of injury. The guys in the back end are making progress. That is positive. Jake Gervase has done a nice job. He has gotten more work with Brandon (Snyder) being out. We moved Noah Clayberg from running back to safety after Brandon got hurt. Amani Hooker also is in the mix. We have four guys competing (at safety). By the time the season starts, we should hopefully have things in shape.

Q: Are the linebackers the strength of the defense?
A: They are, especially with Josey Jewell and (Ben) Niemann. They have played a lot. Bo (Bower) was a starter, lost it and got it back last year. We have more experience here than anywhere else on defense. We need to develop a pecking order behind the starting linebackers.

Q: How do you feel about the early signing period?
A: Our conference has discussed it a lot, which has been good. I wish the early signing period was even earlier. But it is what it is. It?s probably a positive. We will learn as we go along. No one can predict the impact it will have until we go through a cycle or two. It?s encouraging because it?s change and we all can agree that we need change. The model we are using now has gotten really antiquated.

Q: How do you feel about the new rule abolishing two-a-days in training camp?
A: I don?t like it. The exact opposite took place when they tinkered with two-a-days. I am not thrilled about the outcome. The players I talked to are less thrilled than I am, especially when you consider we are trying to take time demands into consideration. I think we have come up with a solution that flies in the face of the time demand issue. I am on board with the intent, but there were other ways to get there in my mind by instituting more non-contact practices. But we have taken the opportunity to lengthen the players? calendar. We already have done that by now not finishing the season before Thanksgiving. That?s gone forever. That?s fine. It?s a sign of the times. Now, we are stretching it the other direction, too. It seems like we say one thing and do another sometimes. It?s disappointing. We only had four two-a-days to begin with. This isn?t like it was 20 years ago. Football has changed so much. It would have made more sense to just limit the contact. If you have two-a-days, just make sure one is non-contact. The issue is contact. There just wasn?t any discussion on this. To me, that?s the biggest issue. There is a chain of command. I get that. Discussion is always appreciated. We had none.