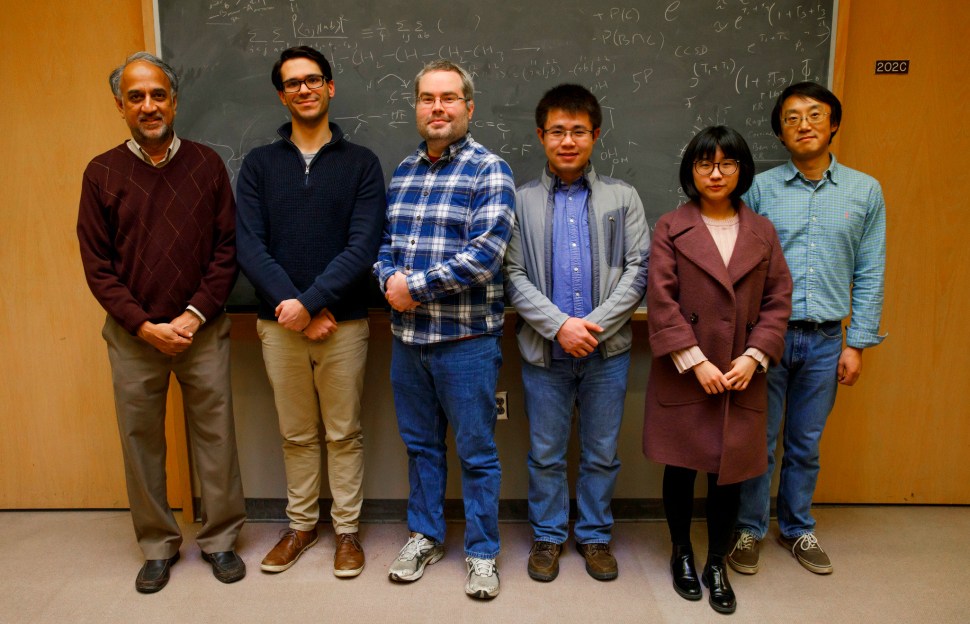 A team of scientists at Indiana University?s Department of Chemistry recently developed a molecule that can use light and electricity to turn carbon dioxide into carbon monoxide. The process, known as CO2 reduction, converts carbon dioxide into carbon monoxide, which has the potential to be used as a chemical feedstock and precursor for liquid fuels.

Led by associate professor Liang-Shi Li, the group of six researchers created the molecule by focusing on its energy efficiency. When carbon monoxide is used for fuel, the gas produces carbon dioxide and emits energy. Converting the carbon dioxide back into renewable fuel requires at least an equal amount of energy pushing back. Li?s team looked to find the smallest amount of energy possible to form carbon monoxide.

Graduate students Richard Schaugaard and Ben Noffke, two members of Liang-shi Li and Krishnan Raghavachari?s research groups, equated the process to skipping a stone across the pond. A pebble needs just enough energy to get safely across the water without sinking, but too much force will prevent it from bouncing off the water. The scientists explained that neutralization of energy in their molecule work the same way, making the process of carbon reduction so effective.

?It?s because of the energy it takes to do these processes,? Schaugaard said. ?You have to put energy in and then transfer it over to CO2. Simply, we are able to get just enough energy to get the process to work and not go into too high of an energy process.?

The molecule is split into two sections. First is the nanographene part, which is responsible for the majority of the light functions by absorbing energy through sunlight. Next to it is what the researchers call the engine of their creation, the atomic rhenium part that is able to produce carbon monoxide. The two sides work together to complete the carbon reduction. Light is collected via the graphene and then a path of electrons is sent to the rhenium atom to convert the carbon dioxide into carbon monoxide.

?Our research specializes in working with these well-controlled graphene systems, and we?re in a unique position to explore research topics along that avenue,? Noffke said. ?In some of our previous work that didn?t involve carbon dioxide reactions. Some of the results from that clued us in that we may be able to contribute to some of the progress in the carbon dioxide reduction. So we merged our previous work with what people already knew about carbon dioxide.?Ultimately, the goal is creating an efficient enough catalyst deterrent turning CO2 into CO. That will allow them to take the excess carbon monoxide and turn it directly into liquid fuel. People would be able to make portable energy they can generate through a plant or solar cell, without needing plugged-in wires and outlets.

Ultimately, the goal is creating an efficient enough catalyst deterrent turning CO2 into CO. That will allow them to take the excess carbon monoxide and turn it directly into liquid fuel that can be used in existing machinery and be delivered to consumers using infrastructure that is already in place. People would also be able to make portable energy they can generate locally with solar energy.

That process is a long way down the road, and out of the IU team?s hands. ?We?re not engineers, so we?re not doing anything like that,? Schaugaard said. ?We are just looking into how this system works, so we can apply those strategies to other systems and share that information with other scientists.? Before they take it to the public, the chemists want to increase the molecule?s power and longevity; they also want to test if it will work as a solid film.

The team also knows that costs must be reduced if the molecule ever were to leave the lab and be seen by a wider audience.

?In order to systematically approach the problem, you need to control some properties about the molecule,? Noffke said. ?And that whole process makes it more expensive. So really what we try to do is find out what are the most important aspects of this catalyst, so that it?s cheaper synthetic strategies to make these in bulk. What kind of properties should they be targeting to make these economically feasible catalysts? Our system won?t see direct applicability. It will act as direction for what people should strive for.?