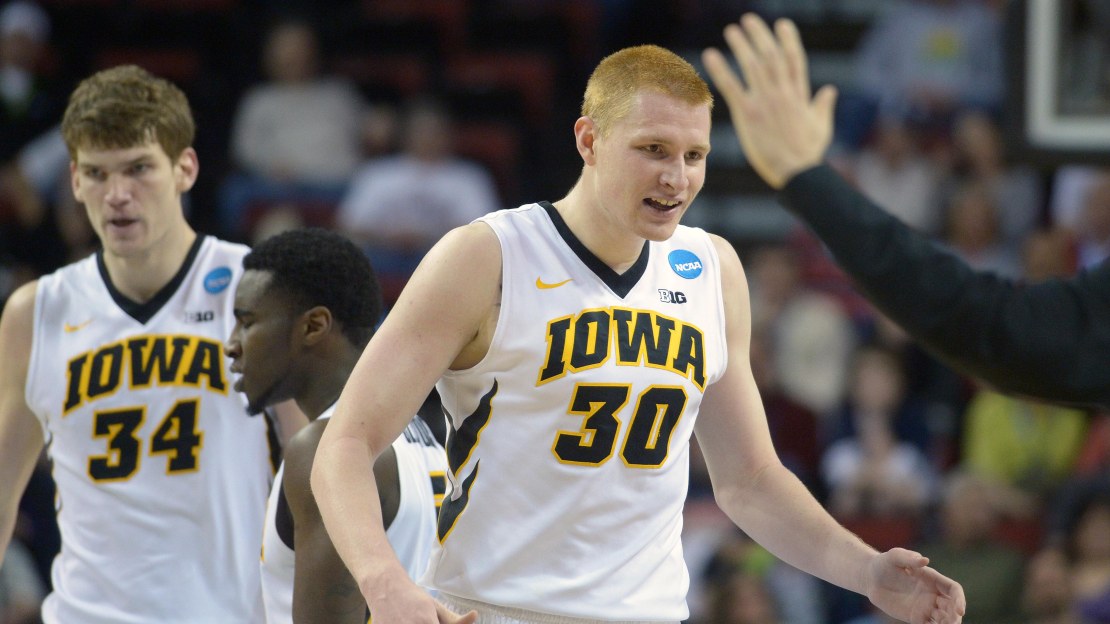 Nearly two years after being selected by the Washington Wizards in the 2015 NBA Draft, the Strongsville, Ohio, native is nearing the end of his second season overseas. The first was spent in Germany, and now he's in Russia trying to lead Zenit Saint Petersburg to the playoffs.

Off the court, White, who still follows the Hawkeyes as much as he can, and his wife, Grace, are expecting their second child in the fall.

Check out our email Q&A with White below.

BTN.com: How much did Iowa, especially the freshmen, surprise you this season?
AW: Honestly, after graduating four starters and all that experience I didn't have a ton of expectations for them. I was pleasantly surprised! It was super fun to see them get better and better basically every time they took the court. I'm excited to see that freshman class grow and do great things.

BTN.com: Speaking of surprises, did you ever see such stardom in Peter Jok's future?
AW: Playing with Pete for two years you could see potential from when he stepped on campus. Obviously, the way he shoots the ball is special. His first two years his numbers weren't where he wanted them, but his last two seasons were amazing. He's a walking bucket!!

BTN.com: The technical and free throws aside, how much did you and your teammates get a crack out of Fran's #frantrums?
AW: Haha, I get more of a kick from them now that I'm watching on TV! But in all honesty, from a coach, I love his fire and passion. He taught me so much over my four years there that prepared me to be a pro and also a genuine person away from basketball.

BTN.com: What's your favorite Fran story or memory?
AW: Man! Coach Fran is a guy of a million stories from his playing and coaching days. They range all over but for me some of my favorite stories and memories are him bringing in different kids or families dealing with illness and disease from the U of I hospital, and having them front and center at our games. We would have kids or families in the locker room or traveling with us to road games. And no matter if we won or lost, those kids and families would be in the huddle and Fran would thank them for being there and supporting us. It's a side of coach a lot of people don't see, but he's a really loving guy who embraces the community. Those moments that change people's lives are things I'll never forget!

BTN.com: How weird will it be to see Connor McCaffery, and soon enough Pat, playing for Iowa?
AW: It will be super cool to see Connor and Pat play at Iowa! They were always at practice and hanging around the team so we spent a lot of time together. They're both really great kids and talented too. I feel like they were little kids when I came into Iowa…I must be getting old!

BTN.com: Which Iowa teammate(s) do you keep in touch with the most these days?
AW: Gabe (Olaseni) was my best man in my wedding and godfather to my daughter. So we talk almost daily. I also talk to Josh (Oglesby) every couple days. But really, with texting and social media, I try to hit most the guys I played with up to check in on them and see how everything is going.

BTN.com: What was your favorite play or moment during your Iowa career?
AW: I have two. Personally, senior night was really special and emotional for me. It was an indescribable feeling walking off the Carver floor the last time vs Northwestern. The other one is our NCAA win over Davidson. Iowa hadn't won an NCAA game in awhile, and it was cool to be the first team in a couple years to do that.

BTN.com: Iowa City restaurant you miss the most?
AW: Really tough question to ask a guy who spends 9-10 months out of the country! I miss tons of restaurants from America, haha. When I'm back, I'll hit up Wig & Pen, Vine, Monica's and, of course, Hamburg Inn, among others.

BTN.com: Can't let you go without asking for an update on your post-Iowa career.
AW: My career has been very successful so far. Year 1 in Germany was a way to show my game here in Europe. So far, year 2 in Russia has been very good. We're in second place and will be making a playoff push in May. I'm sure I will take my try at NBA training camp one day, but for now I'm really enjoying playing in Europe and establishing myself over here. Away from basketball my family is doing awesome. My wife and I just bought a home in the Iowa City area and also will be expecting our second child in October. Life is good!

BTN.com: Best and worst part of playing overseas?
AW: The best part is definitely the fact that I play basketball for a living. It's really cool to be able to provide for my family from the game I love. My wife and daughter have already seen so much of the world and they'll only see more as we continue. It's an experience a lot of people don't get and it's a blessing. The worst part is being away from extended family and the time difference. Thankfully both of our families have visited a lot, but it's still not the same as living close. Also the time difference makes it hard to FaceTime, talk or even follow sports at times.